It is common to abundant throughout the relatively fertile south-west and south-east parts of Australia (including Tasmania and the Bass Strait islands), and through the well-watered coastal zone of tropical Queensland, including Cape York Peninsula.

In Australia and New Zealand its common name is sometimes shortened to White-eye, but this name is more commonly used to refer to all members of the genus Zosterops, or the entire family Zosteropidae.

There are numerous subspecies; among others: 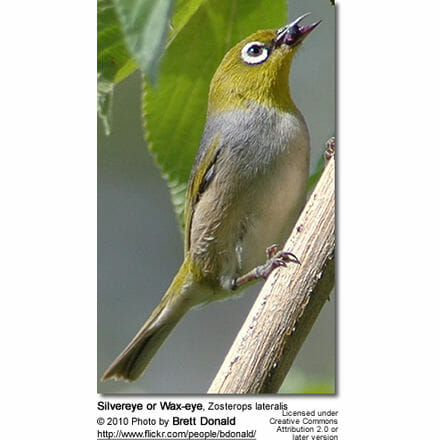 Silvereyes breed in spring and early summer (mainly between September and December), making a tiny cup of grass, moss, hair, spiderweb, and thistledown, suspended from a small tree or shrub, and laying 2 to 4 pale blue eggs. Two broods may be raised during this, the breeding season.

Once the young have fledged, Silvereyes gather into flocks and many migrate north during late summer, making their way north along the coast and ranges, foraging busily during the day with much calling and quick movement through the shrubbery, then flying long distances into the night.

Most of the Tasmanian population crosses Bass Strait (an astonishing feat for 12 cm birds weighing only a few grams) and disperses into Victoria, New South Wales, and south-eastern Queensland. The populations of these areas tend to head further north; while the northern-most birds remain resident all year round. The Silvereye was first recorded in New Zealand in 1832 (its M?ori name, Tauhou, means “little stranger”).

It arrived in greater numbers in 1856, and it is assumed that a migrating flock was swept eastwards by a storm. However, it is also possible that they followed a ship across the Tasman as other birds sometimes do, or were accidentally transported aboard a ship.

Since there is no evidence that it was artificially introduced into New Zealand, it is somewhat ambiguously classified as a native species there and is consequently protected.

Silvereyes are omnivorous but have a particular fondness for fruit. Some orchardists, grape growers, and home gardeners regard them as a serious pest particularly as, being so small, they simply ignore bird nets, popping in and out through the netting at will.

They destroy a wide range of fruit species, including amongst others, apples, citrus, feijoas, figs, grapes, pears and persimmons. 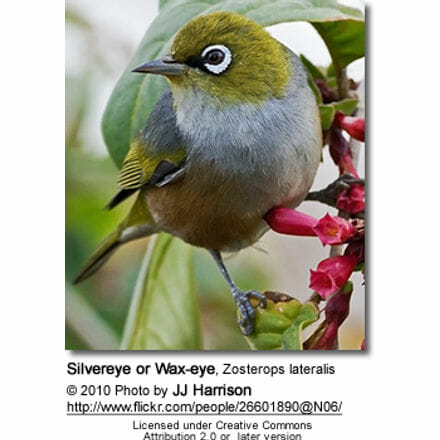