The skuas are seabirds in the family Stercorariidae. The three smaller skuas are called jaegers in North America. They have even been sighted at the South Pole. 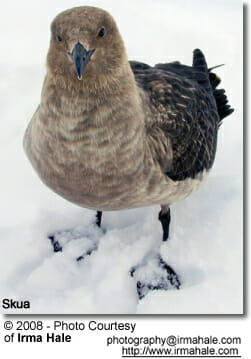 The skuas are seabirds in the family Stercorariidae. The three smaller skuas are called jaegers in North America. They have even been sighted at the South Pole.

The name skua comes from Faroese skúgvur (Stercorarius skua), and the island of Skúvoy is renown for its colony of that bird. Jaeger is derived from the German word Jäger, meaning hunter.

“Skua” is also a slang term at American Antarctic research stations such as the McMurdo Station or the Amundsen-Scott South Pole Station. It is named for the bird, and it means to salvage or scavenge for equipment or gear.

They are in general medium to large birds, typically with grey or brown plumage, often with white markings on the wings. The skuas range in size from the Long-tailed Jaeger (Stercorarius longicauda), at 310 grams (11 oz), to the Brown Skua (Stercorarius antarcticus), at 1.63 kg (3.6 lb). On average, a skua is about 56 cm (22 in) and 121 (48 in) across the wings. They have longish bills with a hooked tip, and webbed feet with sharp claws. They look like large dark gulls, but have a fleshy cere above the upper mandible. The skuas are strong, acrobatic fliers. They are generally aggressive in disposition. Potential predators who go near their nest will be quickly dived at by a parent skuas, which usually target the head of the intruder. 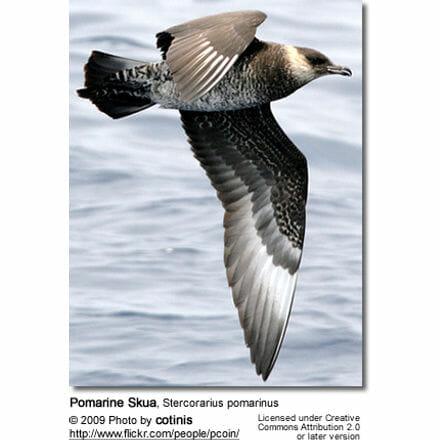 Skuas nest on the ground in temperate and arctic regions and are long-distance migrants. 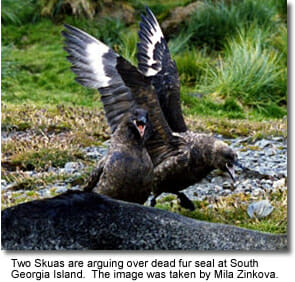 Outside the breeding season, skuas take fish, offal (= entrails and internal organs of butchered animals) and carrion. Many are partial kleptoparasites / stealing foods (comprising up to 95% of the feeding methods of wintering birds), chasing gulls, terns and other seabirds to steal their catches, regardless of the size of the species attacked (up to 3 times heavier than the attacking skua).

The larger species, such as Great Skua also regularly kill and eat adult birds, such as puffins and gulls, and have been recorded as killing birds of the size of a Grey Heron.

On the breeding grounds they commonly eat lemmings (small rodents), and the eggs and young of other birds. 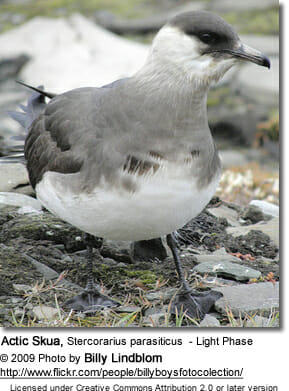 Skuas are related to gulls, waders, auks and skimmers.

In the three smaller species (all Holarctic), breeding adults have the two central tail feathers obviously elongated and at least some adults have white on the underparts and pale yellow on the neck, characteristics that the larger species (all native to the Southern Hemisphere except for the Great Skua) do not share.

Therefore the skuas are often split into two genera with only the smaller species retained in Stercorarius, and the large species placed in Catharacta. However, there is no genetic basis for this separation.

The Pomarine and Great Skuas‘ mitochondrial DNA (which is inherited from the mother only) is in fact more closely related to each other than it is to either Arctic or Long-tailed Skuas, or to the Southern Hemisphere species]. Thus, hybridization must have played a considerable role in the evolution of the diversity of Northern Hemisphere skuas. 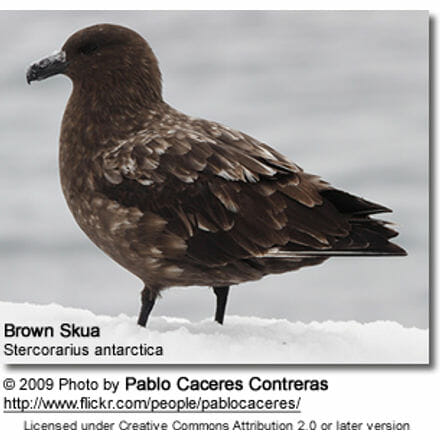 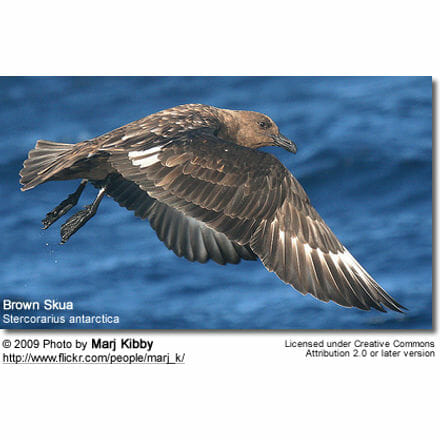