The Slender-billed Prion or Thin-billed Prion, Pachyptila belcheri, is a species of seabird in the Procellariidae family. It is found in the southern oceans.

Like all prions, they are blue-grey above and white below with a dark “M” on their back to their wingtips.

They have a white eyebrow and a dark line extending from below the eye almost to the neck.

Their tail is wedge-shaped and grey with a black tip, their bill is blue-grey, and their feet are pale blue.

They are annual breeders and will lay one egg. Both parents will then incubate the egg and care for the young until they fledge. 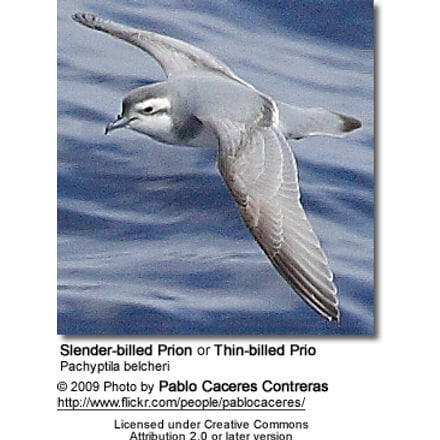 Like all prions, the Slender-billed eat zooplankton, by filtering it through their bill.

The Slender-billed Prion spends all of his non-breeding time over ocean water in the southern oceans. When breeding, they will do so on the Crozet Islands, the Kerguelen Islands, the Falkland islands and Noir Island off the coast of southern Chile.

This species has a very large range and their estimated population is 7,000,000, allowing the IUCN to classify them as Least Concern.

The Slender-billed Prion is a member of the Pachyptila genus and along with the Pachyptila make up the prions. They are then members of the Procellariiformes order, and they share certain identifying features.

They produce a stomach oil made up of wax esters and triglycerides that is stored in the proventriculus (stomach).

This is used against predators as well as an energy rich food source for chicks and for the adults during their long flights.