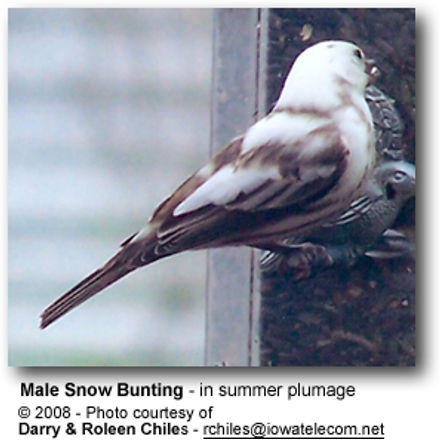 The Snow Bunting (Plectrophenax nivalis) is an arctic specialist with circumpolar Arctic breeding range throughout the northern hemisphere.

There are small isolated populations on a few high mountain tops south of the Arctic region, including the Cairngorms in central Scotland and the Saint Elias Mountains on the southern Alaska-Yukon border.

The breeding habitat is on tundra, treeless moors, and bare mountains. It is migratory, wintering a short distance further south in open habitats in northern temperate areas, typically on either sandy coasts, steppes, prairies, or low mountains, more rarely on farmland stubble. In winter, it forms mobile flocks.

No other passerine can winter as far north as this species apart from the Common Raven.

These confiding little buntings, show little fear of humans, and often nests around buildings in Arctic areas. They will readily accept grain or other food offerings people put out for it. 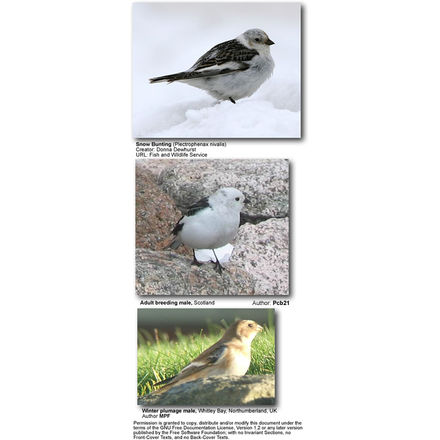 The Snow Bunting is a fairly large, long-winged bunting. The bill is yellow with a black tip, all black in summer males. Unlike most passerines, it has feathered tarsi, an adaptation to its harsh environment. .

In flight, it is easily identified by its large white wing patches.

The breeding male is unmistakable, with all white plumage and a black back.

The breeding female is grey-black where the male is solid black.

In winter plumage, both males and females are mottled pale ginger, blackish and white above, and pale ginger and white below, with the males having more white than the females.

Four subspecies have been identified, and they differ slightly in the plumage pattern of breeding males:

Its call is described as a distinctive rippling whistle, “per,r,r,rit” and the typical Plectrophenax warble “hudidi feet feet feew hudidi”.

The Snow Bunting typically builds its bulky nest in rock crevices. The eggs are blue-green, spotted brown. The young hatch after about 12–13 days of incubation. The young usually fledge the nest when they are about 12 – 14 days old.

The Snow Bunting is very closely related to the Beringian McKay’s Bunting, which differs in having even more white in the plumage. These two buntings have produced hybrids in Alaska, and they have been considered conspecific (of, or belonging to, the same species) by some authors though are generally treated separate species.

The species is currently not considered endangered. During the last ice age, the Snow Bunting was widespread throughout continental Europe.