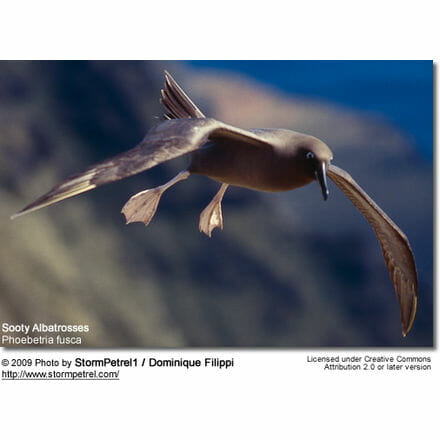 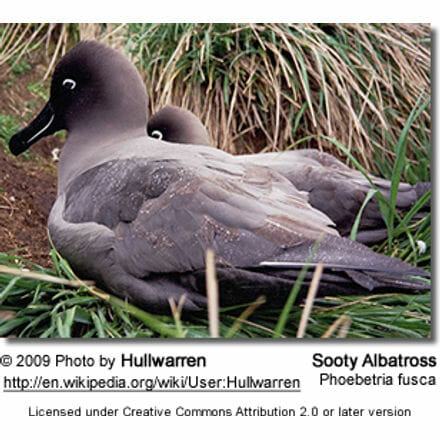 There are two species:

The sooties have long been considered distinct from the rest of the other albatrosses, and have retained their generic status through the many revisions of the family over the last 150 years.

They have traditionally been thought of as primitive, sharing some morphological features with the other petrel families. However, molecular work examining the mitochondrial DNA has shown that the taxon is related to the mollymawks, and that the two taxa are distinct from the great albatrosses and the North Pacific albatrosses.

It is sooty-brown with darker shading on the sides of its head. It has a white crescent above and behind its eye. Its bill is black with an orange or yellow sulcus. The tail of this albatross is wide diamond shaped.

Juveniles are similar to adults. 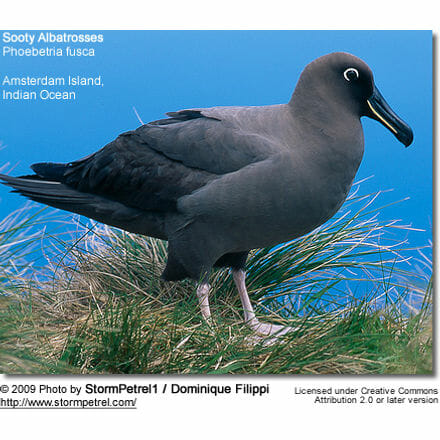 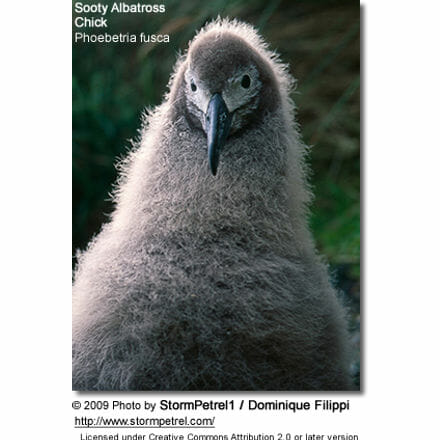 The Sooty Albatross is a colonial bird; however not to the degree of other albatrosses, as their colonies usually consist of 50 to 60 pairs.

On some breeding islands (like Tristan da Cunha) they may nest in very small groups or clusters of two to five nests, and the Light-mantled will even nest singly. This is in part due to the influence of humans, and in part due to their tendency to nest on cliffs, unlike the flatter ground preferred by other albatrosses.

They will build their cone shaped nests on cliffs and steep slopes. Whereas they can mate annually they only do so biennially. They usually lay one single egg that is incubated for 70 days, by both parents. The male taking the first stint after laying (lasting 11 days) thereafter both parents taking it in turns of 7 days. After hatching the chick is brooded for 20 days until it is able to thermoregulate on its own, after which both parents undertake the task of feeding it, on average bringing food to the chick every three days. The chick is fed for about 160 days, until it is able to fledge. There is no parental care after fledging.

They are able to complete a breeding cycle in under a year, but do not breed in consecutive years, instead taking a year off and returning to breed every two years.

Around 22% of the Sooty Albatrosses survive until adulthood (there are no figures for Light-mantled). Both species return to the breeding colony after 7–10 years of fledging, and begin to breed a few years later.

Sooty Albatrosses nest on islands in the South Atlantic (Tristan da Cunha and Gough Island) and islands in the South Indian Ocean (the Crozet Islands to Kerguelen Island). At sea they forage from South America to Australia, with a few records of birds reaching New Zealand. The Light-mantled Albatross has a wider distribution, nesting on South Georgia in the Atlantic, many of the same islands in the Indian Ocean, Macquarie Island and New Zealand’s sub-Antarctic islands. At sea it forages further south than the Sooty to Antarctica, and around the Southern Ocean as far north as Chile, Tasmania and South Africa. At sea they often eat more fish as opposed to squid than other albatross species, and the sooties also readily take carrion and particularly other seabirds. They also are the deepest diving of the albatross, often diving to 5m and once being recorded as deep as 12m.

Their diet consists of squid, crustaceans, cephalopods, fish, and carrion.

Populations have been shrinking 75% over the last 90 years; although the rate of reduction has recently slowed. The 21st century has seen stable populations at Gough Island.

This species is not overly affected by longline fisheries, but instead by domestic cats eating eggs and chicks on Amsterdam Island and the Kerguelen Islands. Avian cholera, pasteurellosis, and erysipelas are major threats. Illegal poaching has nearly ceased.

Studies and surveys are conducted to assist in slowing its demise. It is a protected species on the Tristan da Cunha group, Gough Island is a World Heritage Site, and Prince Edward Island, Gough Island, and Inaccessible Island in the Tristan da Cunha group are protected nature preserves. Also, in 2007, the Crozet Islands, Amsterdam Island, and the Kerguelen Islands were declared nature preserves.