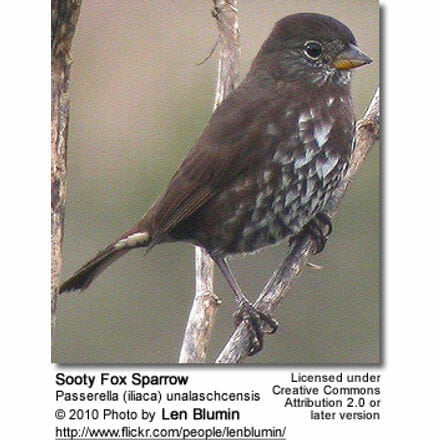 Sooty Fox Sparrow (Passerella (iliaca) unalaschcensis) contains the darkest-colored taxa in the genus Passerella. It is currently classified as a “subspecies group” within the Fox Sparrow pending wider-spread acceptance of species status. It has long been suspected to be a separate evolutionary lineage due to morphological distinctness (Swarth 1920), and this is confirmed by analysis of mtDNA sequence and haplotype data (Zink 1994, Zink and Kessen 1999, Zink and Weckstein 2003). This group appears to be most closely related to the Thick-billed and/or Slate-colored Fox Sparrows (Zink 1996, Zink and Weckstein 2003).

The upperparts and head are a variable shade of brown with streaks on the underparts of the same color.

Sooties can be told from all other Passerella by a complete lack of gray and rufous in the plumage. 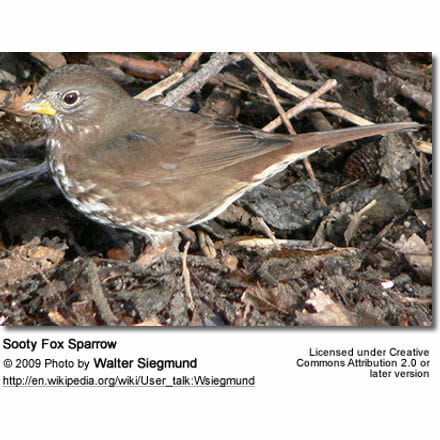 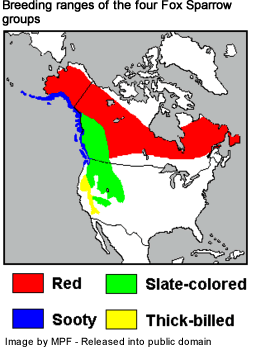 Six subspecies are usually recognized in the Sooty Fox Sparrow complex, ranging from unalaschensis in the Aleutians to fuliginosa in extreme northwestern Washington:

Breeds from Unalaska Island (Aleutian Islands) to the Shumagin and Semidi Islands and adjacent Alaska Peninsula. Winter range from S British Columbia to southernmost California, rarely even further south.(Weckstein et al. 2002)
There are two distinct groups known from the winter range: brownish ash-grey birds with alonger and more pointed bill, and darker lead-grey birds with thicker, blunter bills; the taxonomic significane of this is unknown (Weckstein et al. 2002). Seems to intergrade with sinuosa and insularis where their ranges meet. (Swarth 1920)

The “non-typical fuliginosa” of Swarth (1920), breeding between the Chilkat River area to Tewart and surroundings (British Columbia), and wintering along the coast, mainly between Oregon and the San Francisco Bay region (Weckstein et al. 2002).
Much like fuliginosa, but duller and shorter-tailed. Not usually accepted as distinct by recent reviewers (e.g. Zink 1994, Rising and Beadle 1996, Zink and Kessen 1999), although the presence of similarly distinct birds in unalaschcensis suggests the matter warrants more research.

Sooties prefer to breed in willows and alders at the edge of wet habitats. 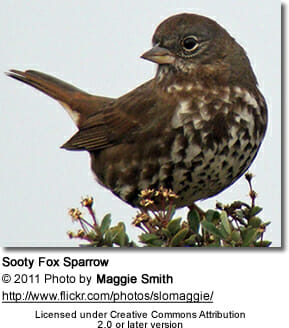 Beadle and Rising (2002) describes their call note as a sharp zitt or thik, while Sibley (2000) says it is like that of Red Fox Sparrow.