The Southern Royal Albatross, (Diomedea epomophora), is a large seabird from the albatross family. At an average wingspan of almost 3 m (9.8 ft), it is the second largest albatross, behind the Wandering Albatross. 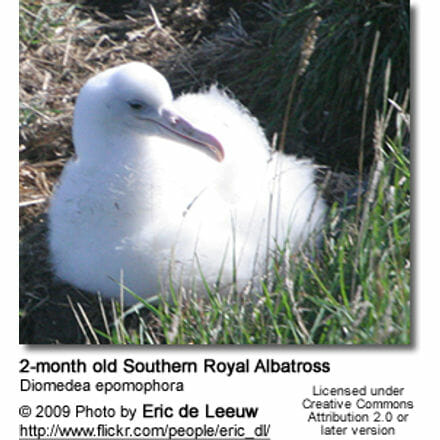 The juvenile has a white head, neck, upper mantle, rump, and underparts. There are black speckles on the mantle, and they have dark brown or black wings with white flecks on coverts.

Their tail is white except for the black tip as is the under-wing. As they age the back, wings, and tail. All ages have a pink bill with black on the cutting edge on the upper mandible (bill), and the legs are flesh.

They are hard to differentiate from the Northern Royal Albatross and the Wandering Albatross, with the Southern having white on the upper wing.

The majority of the world’s population of Southern Royal Albatrosses nest on the rat-free Sub-antarctic Campbell Island (New Zealand), around 8,200 to 8,600 pairs.

There are smaller colonies on Adams Island and Auckland Island in the Auckland Islands,20 pairs combined, and 69 pairs on Enderby Island and some sanfordi X epomophora hybrids at the Northern Royal Albatross colony on the Otago Peninsula in New Zealand.

They range along the southern oceans concentrating on the west and east coast of southern South America, and also in the waters surrounding New Zealand. 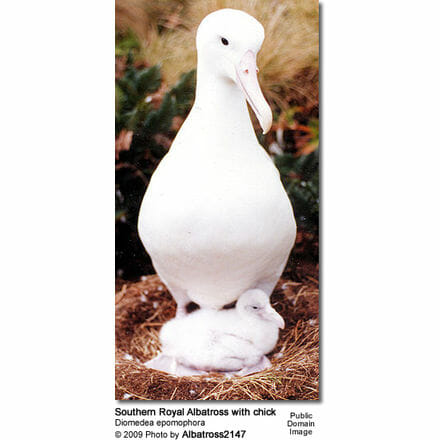 They prefer to nest on tussock grassland, plateaus, or ridges, and will lay one egg biennially (every second year).

Both parents will incubate the egg, and rear the young. When feeding the young they will range south to the Campbell Plateau and north to the Chatham Rise.

The population is recovering from its severe downward spiral in the late 19th century and the early 20th century. By the 1880s, this Albatross was extirpated from Auckland Island and Enderby Island.

Pigs and cats are still a problem, as they take chicks and eggs, on Auckland Island. Longline fishing is a major problem and a possible emerging threat in Dracophyllum, a scrub that is taking away from their nesting range.

Albatrosses belong to Diomedeidae family and come from the Procellariiformes order, along with Shearwaters, Fulmars, Storm-petrels and Diving-petrels.

They share certain identifying features. First, they have nasal passages that attach to the upper bill called naricorns.

It was once considered conspecific (of, or belonging to, the same species) with the Northern Royal Albatross (Diomedea sanfordi) as the Royal Albatross and the split into two species is almost universally accepted. BirdLife International, Brooke, and Robertson and Nunn. Clements still does not recognize the split, and the SACC has recognized the need for a proposal.