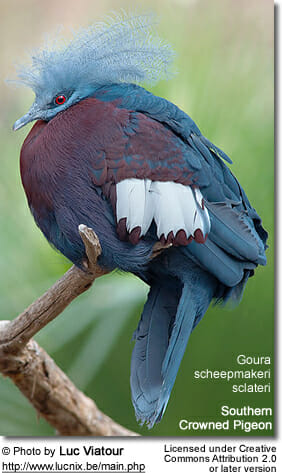 There are two subspecies of the Southern Crowned Pigeon, differentiated by their shoulder and belly colorations:

This species was first discovered new to science by Otto Finsch who found a live bird received from the dealer C. Scheepmaker in Amsterdam Zoo and named it after him.

Being tame and heavily hunted for its meat and plumes, the Southern Crowned Pigeon is evaluated as Vulnerable on the IUCN Red List of Threatened Species. It is listed in Appendix II of CITES.