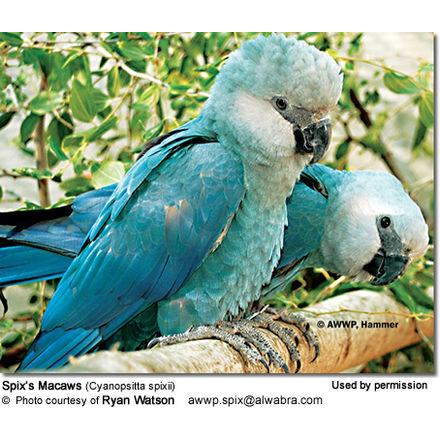 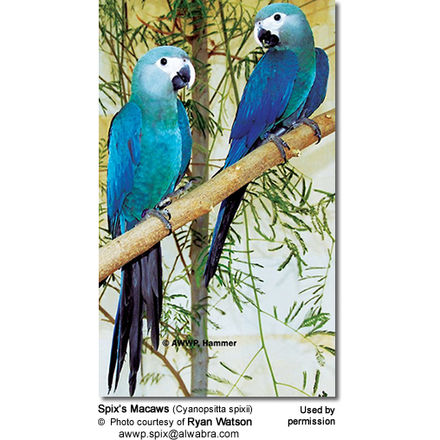 Most breeding activities have been observed between November and March, varying slightly according to the incidence of rain. Nesting may occur as early as September. Spix’s Macaws are believed to breed only once a year.

The copulation is said to last between 2 and 3 minutes, and is performedside-by-side. During the mating, both the male and female remain on a perch with one leg of the male (typically the right) mounted on the back of the female’s rump (lower back).

In the wild, they mostly nest in the cavities of the dead crowns of craibeira trees (Tabebuia caraiba) and possibly other trees. They often reuse the same nesting cavity over several nesting seasons. Locals reported that one traditional nesting cavity was used by Spix’s Macaws for over fifty years. However, it is unconfirmed whether it was the same pair or whether different pairs used this nesting site in different years.

The average clutch size consists of 2 to 3 white oval shaped eggs (4 up to 7 eggs incaptivity), which are laid at two-day intervals. The eggs measure about 41.3 x 30.6 mm (1.63 x 1.20 inches) and weigh 20 grams (0.7 oz) when laid. They are incubated by the female alone for about 25 – 28 days. During this time, she is regularly fed by the male. The chicks hatch blind and almost naked, with only little feather down. The chicks have much smaller crops than the chicks of other macaws of a similar size. Therefore, their parents have to feed them more frequently.

Both parents are very protective of their eggs and chicks and will either aggressively defend them, or — if threatened — the parents have been known to lie on the ground on their sides to draw attention away from the nest.

Unfortunately, in most cases, nesting is unsuccessful, as the eggs and the young were often taken by poachers or predators. Since the parents generally reused the same nest each year, they were particularly susceptible to poaching, as the poachers would return each breeding season.

In 1957, some introduced African Honey Bees (Apis mellifera scutellata) – also commonly referred to as the “Killer Bees” – escaped from a research facility in Brazil and spread like wildfire in the tropics. These aggressive bees competed with the macaws for cavity nests, and attacked and occasionally even killed breeding Spix’s Macaws in their nest holes. 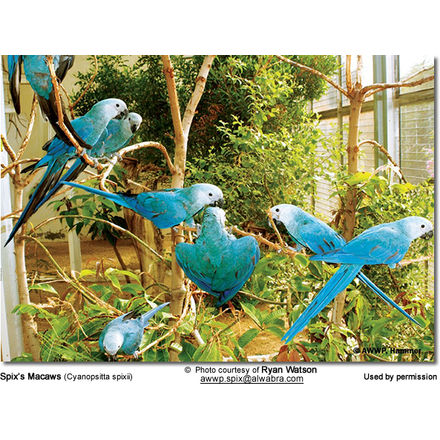