Spizaetus is the typical hawk-eagle birds of prey genus found in the tropics of the Americas. It was however used to indicate a group of medium-large tropical eagles that included species occurring in southern and southeastern Asia and one representative of this genus in the rainforests of West Africa.

The Old World species have been separated into the genus Nisaetus. Several species have a prominent head crest.

The American Ornithologists’ Union merges Spizastur into Spizaetus since 2007.

Spizaetus eagles are forest birds with several species having a preference for highland woodlands. They build stick nests in trees

Males and females look alikely plumaged with typical raptor brown upperparts and pale underparts, but young birds are distinguishable from adults, often by a whiter head.

These eagles eat medium sized vertebrate prey such as mammals, birds and reptiles.

The species that were historically placed in this genus are: 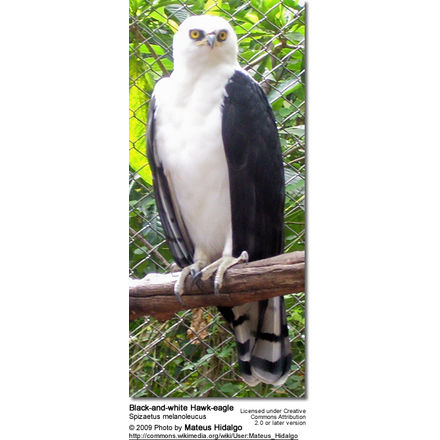