Note: “Spoonbill” could also refer to Northern Shoveler or Paddlefish.

Spoonbills are a group of large, long-legged wading birds in the family Threskiornithidae, which also includes the Ibises.

The spoonbill family is one of the families in the order Ciconiiformes.

All have large, flat, spatulate bills and feed by wading through shallow water, sweeping the partly-opened bill from side to side. The moment any small aquatic creature touches the inside of the bill—an insect, crustacean, or tiny fish—it is snapped shut. Spoonbills generally prefer fresh water to salt but are found in both environments. They need to feed many hours each day.

Spoonbills are monogamous, but, so far as is known, only for one season at a time. Most species nest in trees or reed-beds, often with ibises or herons. The male gathers nesting material—mostly sticks and reeds, sometimes taken from an old nest—the female weaves it into a large, shallow bowl or platform which varies in its shape and structural integrity according to species.

The female lays a clutch of about 3 smooth, oval, white eggs and both parents incubate; chicks hatch one at a time rather than all together. The newly-hatched young are blind and cannot care for themselves immediately; both parents feed them by partial regurgitation. Chicks’ bills are short and straight, and only gain the characteristic spoonbill shape as they mature. Their feeding continues for a few weeks longer after the family leaves the nest. The primary cause of brood failure appears not to be predation but starvation. 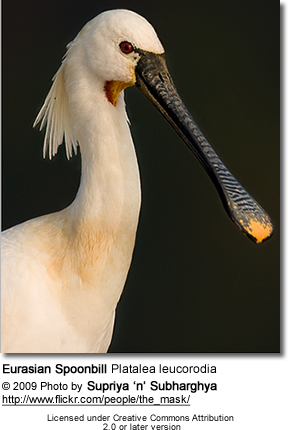 The six species of spoonbill in two genera are distributed over much of the world.