The Spotbill, Anas poecilorhyncha – also known as the Spot-billed Duck or Indian Spotbill – is a dabbling duck . 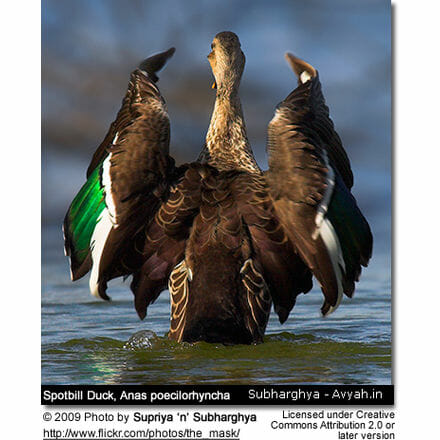 The Spotbill breeds in tropical and eastern Asia.

This duck is resident in the southern part of its range from India to southern Japan, but the northern race, Chinese Spotbill is migratory, wintering in southeast Asia. (Please scroll down to view photo of the Chinese Spotbill.).

It is quite gregarious outside the breeding season and forms small flocks.

These are Mallard-sized mainly grey ducks with a paler head and neck and a black bill tipped bright yellow.

The wings are whitish with black flight feathers below, and from above show a white-bordered green speculum (= distinctive wing patch) and white tertials (= the flight feathers that are closest to the bird’s body along the wing).

The male has a red spot on the base of the bill, which is absent or inconspicuous in the smaller but otherwise similar female.

Juveniles are browner and duller than adults. The Chinese Spotbill is browner. It lacks the red bill spot, and has a blue speculum. 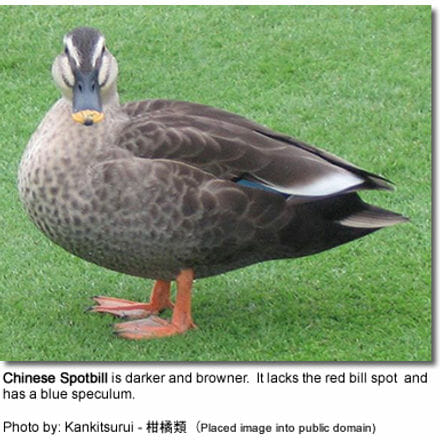 It nests on the ground in vegetation near water, and lays 8-14 eggs.

Both the male and female have calls similar to the Mallard.

The phylogenetic placement of this species is enigmatic. The Chinese Spotbill is considered to be near the point where it might be considered a distinct species (e.g. Johnson and Sorenson 1999). And while molecular analyses and biogeography indicate that most species of the mallard group in the genus Anas form two distinct clades, hybridization between all of these species is a regularly-occurring phenomenon and the hybrids are usually fully fertile.

The present species is known to produce fertile hybrids with the Pacific Black Duck and the Philippine Duck in captivity (Carboneras 1996), and naturally hybridizes with the Mallard as their ranges now overlap in the Primorsky Krai due to the Spotbill’s northward expansion (Kulikova et al. 2004).

The reason for this is that the mallard group evolved quite rapidly into lineages that differ in appearance and behavior, but are still compatible genetically.

The problem with the present species lies in the fact that its position in the mallard group is ambiguous. The mallard lineages cannot be reliably separated by behavior, but only by biogeography, and it is only the Pacific radiation in which there are species with a distinct male nuptial plumage.

However, although this species, judging from its distribution, seems to belong to the Asian group, it occurs close enough to the Bering Straits not to discount an originally North American origin.

An initial study of mtDNA cytochrome b and NADH dehydrogenase subunit 2 sequences, using one individual each of the Indian and the Chinese Spotbills, suggested that these were well distinct and that the former was a more recent divergence from the Mallard’s ancestors, and both being solidly nested within the Pacific clade (Johnson and Sorenson 1999).

But another study (Kulikova et al. 2004), utilizing a good sample of Chinese Spotbill and Mallard specimens from the area of contact, and analyzing mtDNA control region and ornithine decarboxylase intron 6 sequence data, found A. (p.) zonorhyncha to be more closely related to the American clade, which contains such species as the Mottled and American Black Ducks.

It further revealed that, contrary to what was initially believed, female Spot-billed Ducks do not seem to prefer the brightly-colored Mallard drakes to their own species’ males, with hybrids being more often than not between Spotbill drakes and Mallard hens, but this might simply be due to the more strongly vagrant drakes being over-represented in the northwards-expanding population.

In conclusion, it seems clear that Johnson and Sorenson’s 1999 study cannot be relied upon: the perceived relationships as presented there are far more likely than not due to the small sample size.

But the apparent similarities to the American species are also misleading: thorough analysis of mtDNA control region haplotypes (Kulikova et al. 2004, 2005) concluded that the similarities between the Spotbill and the American “mallardines” were due to convergent evolution on the molecular level.

Rather than being derived from the North American clade, the spotbill seems to hold a phylogenetic position close to the point where the Pacific and American lineages separated, evolving independently from there except for occasional hybridization events with the Mallard, although the relationships of zonorhyncha to the Pacific Black Duck deserve further study.

In the Japanese manga and anime One Piece, there is a “Super Spotbill” named Karoo which is owned by Nefertari Vivi. Also, the character Farfetch’d in the Pokémon series is based on the spotbill.