The Spot-billed Pelicans (Pelecanus philippensis) – also known as Grey Pelicans, Spotted Pelican or Philippine Pelicans – are one of the most threatened pelican species in the world.

They are classified as “Near-threatened, ” as their numbers have declined in many areas due to habitat loss and human disturbance, and many populations in Southeast Asia are now extinct.

In 2005, its population was estimated to consist of :

Due to improved protection of this species, their numbers have seen an increase in recent history, and about 13,000 – 18,000 individuals are believed to exist globally.

Several protected colonies nesting close to human habitations have become popular tourist attractions, such as the villages of Kokrebellur and Uppalapadu in India.

These pelicans once occurred over a wide range in South Asia, but now they only breed in Sri Lanka and southeastern India, and potentially also on the island of Sumatra in western Indonesia. 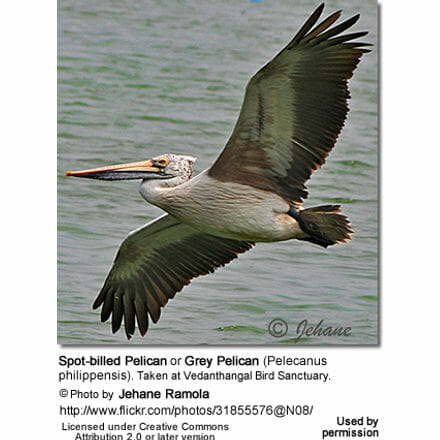 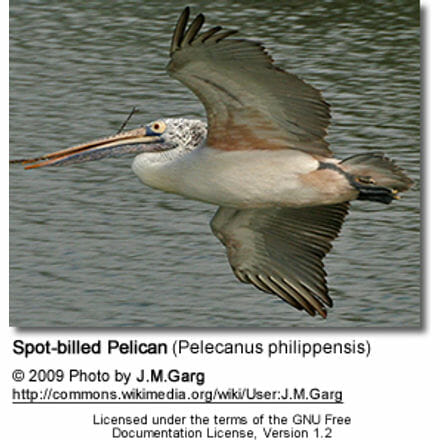 The Spot-billed Pelicans were formerly common across much of Asia, but following a widespread decline, they are now mostly confined to India, Sri Lanka, Cambodia and to a lesser extent in Thailand.

In southern India, about 21 known breeding colonies exist in the states of Andhra Pradesh, Karnataka and Tamil Nadu.

Small numbers are expected to breed on the island of Sumatra in Indonesia and they may also breed in the country of Myanmar (also known as Burma) located in Southeast Asia. Migrants have also been reported in Nepal, Laos and Vietnam.

Even though this species is mostly resident (non-migratory); during the non-breeding season in particular, they may make local movements in response to availability of food.

Small groups fly in formation with steady flapping. During the hot part of the day, they are often seen soaring on thermals. 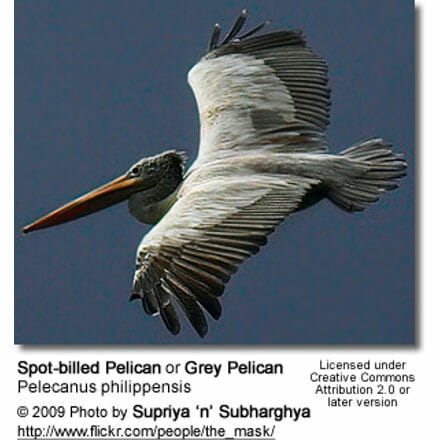 Spot-billed Pelicans inhabit various deep and shallow wetlands, from freshwater to saline, in open or forested areas. They are often seen on large bodies of water, particularly large lakes.

They breed in colonies in tall trees or palms and in some places, nesting pairs are found close to human habitations. They feed in open water, mostly on fish.

The plumage is mostly white, with a curly, greyish crest, hindneck and a brownish tail.

They have a large, spotted bill – which gave this species its common name. The upper bill is pinkish and the tip of the bill (or nail) is yellow to orange. In breeding plumage, the skin at the base of the bill is dark and the orbital (eye) patch is pink.

Their large, expandable, throat pouches are used to scoop up fish from the surface of the water. The pouch is pink to purplish in color, with pale large spots. 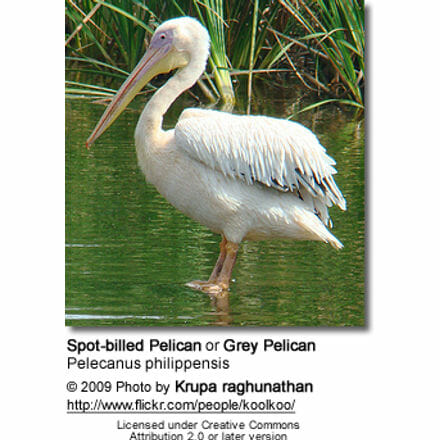 Hatchlings are covered in white down and fledglings have a greyish speckled plumage.

They don’t have the distinctive “bill spots” until they are about one year old; and they molt into their adult plumage in their third year.

The Dalmatian Pelicans are larger in size. They have a bushy, curly crest. The plumage is a brighter white. The pouch is orange. In flight, the Dalmation Pelicans can be identified by their darker tertials and inner secondaries (shorter, upper “arm” feathers) and the pale band that runs along the greater coverts. The tail is also rounder.

The Juvenile Great White Pelicans are larger in size and have a darker head, neck and upper plumage. The lores (area between the upper beak and eyes) are paler and the flight feathers are blackish.

It is difficult to differentiate them from other pelicans from a distance; however, at a close range, the spots on the upper bill, the lack of the bright colors of other pelican species, and the greyer plumage are distinctive. 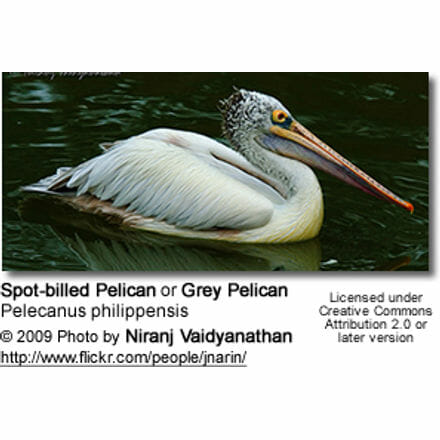 Spot-billed Pelicans are mostly silent. However, nesting birds make hisses, grunts or may snap their bills.

Their breeding seasons varies depending on rain falls; but in most cases occurs between September to November.

Spot-billed Pelicans nest in colonies – in some instances hundreds of them nest in the same area of the forests, with up to 15 nests on a tree. They may breed alongside other waterbirds, such as Painted Storks. The nest is a thick platform of twigs, often placed on a low tree. They return to the same tree and the same position every year.

The young fledge when they are about 3 months old.

Spot-billed Pelicans generally catch their favored prey – fish – in the huge bill pouch while swimming at the surface.

They usually forage alone or in small flocks; however, groups may line up and drive fish towards the shallow waters.