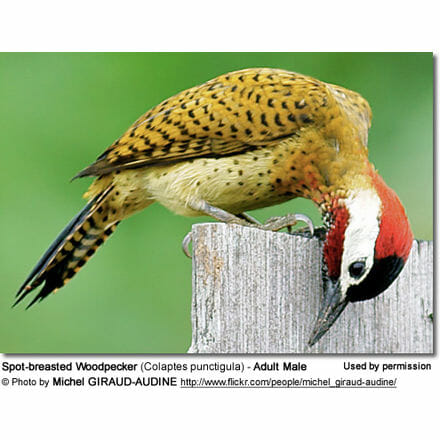 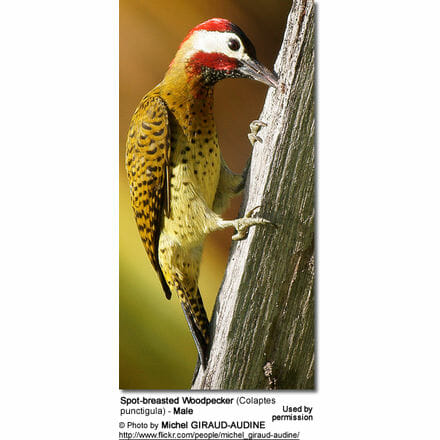 The Spot-breasted Woodpecker (Colaptes punctigula) – or Spot-breasted Flicker – is a Central and South member of the Picidae (Woodpecker) family. It is listed as being “fairly common” in its range, although the population size has not been estimated. Little is known about this species.

This sedentary bird, it has a lifespan of 4.3 years. Just as most woodpeckers, the Spot-breasted is diurnal, spending its day away from the roost. This species roosts in holes it has excavated, often drilling multiple holes in the same tree.

Deforestation has actually aided this species, since it has created less densely wood areas and clearings. The result has been an increase in the populations of several regions; this woodpecker prefers clearings and less densely wooded areas.

The Spot-breasted is found solely in South and Central America:  Bolivia, Brazil, Colombia, Ecuador, French Guyana, Peru, Suriname, Venezuela, and Amazonia. Although there are some in eastern Panama, the populations are few and far between. Even though it is widespread, the Spot-breasted Woodpecker is not common in any of its territories.

Its natural habitats include the subtropical or tropical, moist lowland forests and mangrove forests, and heavily degraded former forests. This species also dwells in a wide variety of conditions, from very moist to dry forests, open woodlands and galleries, and riparian forests. It prefers open woodlands, not dense forests. It will inhabit artificial or terrestrial landscapes, arable land, and plantations as well as rainforests, deciduous and gallery forests, swamp edges, llanos (plains), scrub, both dry and moist savannas, and moriche palm groves. It can be found at altitudes up to 1600 meters. 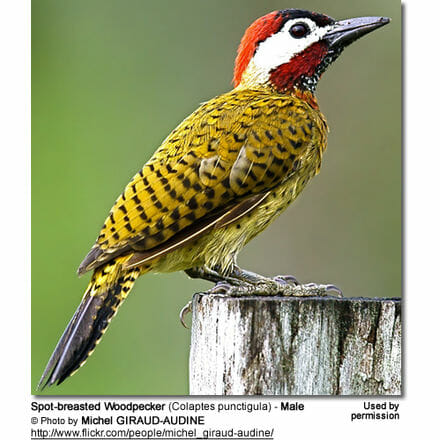 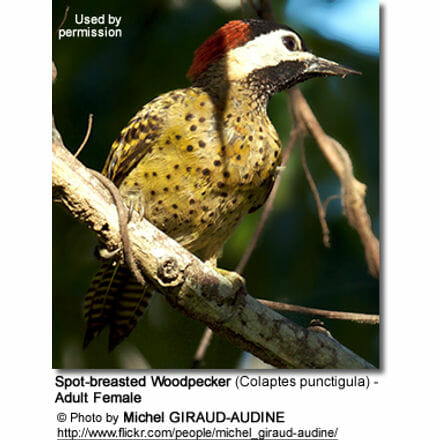 Six subspecies of the Spot-breasted exist; they vary in size, degree of breast speckling and other subtle characteristics. They are:

Found in the Guianas

Found in eastern Colombia and most of Venezuela, except northwestern regions.

Found in Upper Amazonia – from eastern Ecuador and eastern Peru east to northeastern Brazil in the state of Pará, south to northwestern Bolivia and northern Mato Grosso. 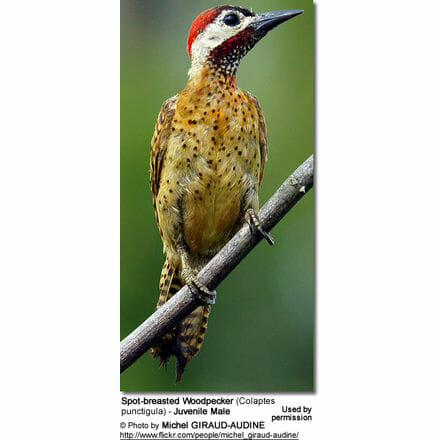 The Spot-breasted Woodpecker is brightly colored, bearing a slight resemblance to the Golden-olive Woodpecker (Piculus rubiginosus), which is about the same size and has a similar facial pattern. However, the Golden-Olive Woodpecker possesses band-like markings on its underparts and unbanded upperparts.

The upperparts and wings of the adult male are marked with a series of black bars.
The flight feathers are dark brown with paler bars, and yellow, narrow patches form a grouping that can be observed during flight. The rump is less marked and paler, and the central, upper tail feathers display dark brown feathers; the outer tail feathers show barred green and yellow markings.

On the underparts, the plumage is a pale yellow-olive, but the upper breast is tinged reddish-orange, turning paler on the belly. The breast shows tiny black spots, and the flanks are very lightly spotted. The undertail coverts are yellowish with black spots and the undertail feathers are yellow-brown with brown bars. There are dashes of pale yellow on the underwing feathers.

The front of the crown is black, and the back of the crown, the nape and moustache are crimson. The lores and sides of the head are white, while the back and wings sport olive-colored bars. The rump is a shade of saffron with some black spots, and the bill and legs are black. The female is similar, but without the moustachial streak.

The main staple of the Spot-breasted Woodpecker’s diet is ants; their eggs are also consumed and are found low on the tree. He will probe both trees and ground to glean them, lifting the soil and leaves to expose them. One can find this bird foraging on the ground, digging into the anthills with his mate or family.

Both the male and female excavate the nest cavity, choosing a dead or living tree. This is an aggressive species, and their courtship displays reflect that trait. The male erects the feathers of his crown and nape and swings both his head and body; this is accompanied by a great deal of head-bobbing, tail fanning and wing drooping. 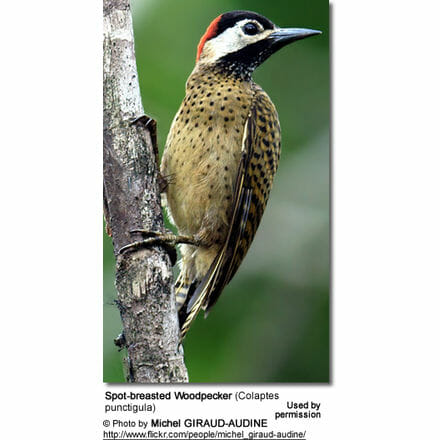