The Spotted Redshanks (Tringa erythropus) – also known as Dusky Redshanks or Greater Redshanks – are arctic waders that occur naturally across the Arctic Circle, from Scandinavia to Asia, and migrate south (southern Europe, Africa and south Asia) for the winter. They are closely related to the Greater Yellowlegs and Greenshank, and all have the basic leg and foot colors of the shank family of birds.

They are best known for the males’ dramatic sky dance, which are described as “descents of almost incredible swiftness and upward sweeps of equal speed, ” accompanied by rattling motions of the wings and excitable songs. These courtship displays intensify during the hours of twilight around midnight.

Spotted Redshanks breed in northern Scandinavia and northwestern Russia across the northern (forest zone of) Siberia to the Chukotskiy Peninsula in northern Asia; and they migrate south to winter from western Europe (along the coasts) through the Mediterranean to south to Equatorial Africa and even to South Africa, and east through the Persian Gulf and India to southeast Asia, southeast China and Taiwan. Occasional vagrants make it to North America.

Their breeding habitats are pools, marshes and peatbogs; often shared with other waders, including sandpipers, greenshanks, jack snipes and whimbrels.

Female Spotted Redshanks form flocks and start their migration south to their wintering grounds as early as June and the males and juveniles follow in July and August.

They winter in muddy estuaries.

The Spotted Redshanks are under protection of the Agreement on the Conservation of African-Eurasian Migratory Waterbirds (AEWA).

Spotted Redshanks measure 11.4 – 13 inches (29 – 33 cm) in length, including the tail. The long legs are reddish, as is the straight bill which has a slight kink near the tip.

Breeding Plumage: Sooty black plumage with white spots on the upper and middle back and a white oval patch on the lower back. White eye rings.

Brown above and have uniformly barred below.

The Common Redshank is slightly smaller in size, has a shorter bill and legs, and is brown above and white with some dark patterning below. 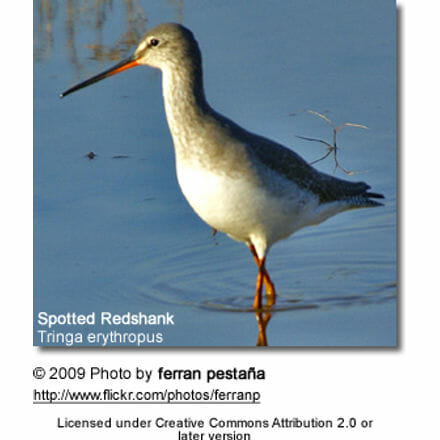 Spotted Redshanks feed on small invertebrates, such aquatic insects and their larvae, as well as insects, spiders and worms.

Theseenergetic foragers are often up to their flanks in water rapidly feeding with traditional sideways movements; or swimming, occasionally immersing the head and neck at which point they look like diving ducks.

Their breeding habitats are pools of water, marshes, peatbogs and open boggy taiga. The average clutch consists of four eggs which are laid in a ground scape.

The breeding vocalizations are described as creaking whistle teu-hu sounds; their noisy flight calls as distinctive ‘tchuet’ ; and their alarm calls as kyip-kyip-kyip.