The Spotted Thick-knee (Burhinus capensis) is known by various names, includingSpotted Dikkop or Cape Thick-knee, or Gewone Dikkop (in Afrikaans).

Its natural range stretches throughout central and western sub-Sahara Africa – where they usually occur in grasslands, semi-deserts and urban areas.

They are well camouflaged due to their brown black and white plumage that blends well into its environment. This species relies on this camouflage to protect themselves from predators.

They are usually seen singly or in pairs. 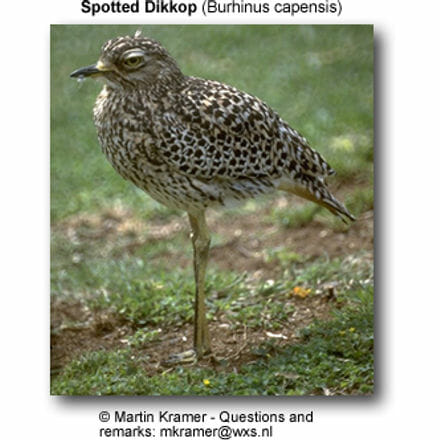 They have brown heads The special characteristics of this species include large yellow eyes and its long greenish-grey / yellowish-tinged legs that appear to have thick knees.

It has a short, plover-like, yellow-brown beak. The arrow-shaped head and part of the back are covered with brownish black streaks. A dark brown streak stretches from under the eye to the ear feathers and a white streak can be seen below the eye to the cheek. There are white feathers around its eyes.

The upper parts of the body and wings have brown, white and black splotches. A white bar of plumage separates the wing into sections. Wings are brown and grey, tipped with black and have white edges surrounding them. The throat is white and the breast is light brown with black streaks. The wedged-shaped tail is tipped in black with some white markings.

Males and femaleslook alike. Juveniles look like adults except they have grey freckled wing feathers.

These birds are capable of flying but prefer walking. When they do fly, they are usually high up and their wing beats are strong and rapid.

Their expected life span is about fifteen years. 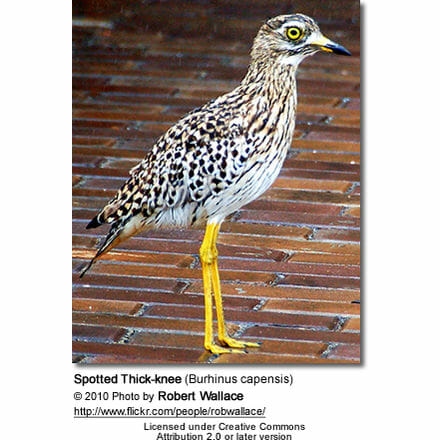 They are usually quiet during the daytime, but tend to get noisy after sundown as this is the time when they are most active. They repertoire includes several calls, including tche-uuu , pi pi pi pipi, whee-yu-ee. Sometimes they croak.

They feed on grass seeds, insects (butterflies, bees, wasps, locusts and ants), small lizards, rodents, snails and crabs. They usually forage for food on the ground.

Spotted Thicknees are usually monogamous (have only one mate) and outside the mating season, they tend to be quite mellow. However, males can become aggressive and territorial when they are protecting or defending the young.

They typically nest in spring or early summer. They build nests on the ground with figs, straws and leaves. They are usually lined with small stones and dry plants. The nest is placed under a bush to protect the eggs and the young from predators.

The hen will lay one to three brown and speckled oval-shaped eggs in each clutch. Both parents take turns in incubating the eggs until they hatch (about26-27 days of incubation).