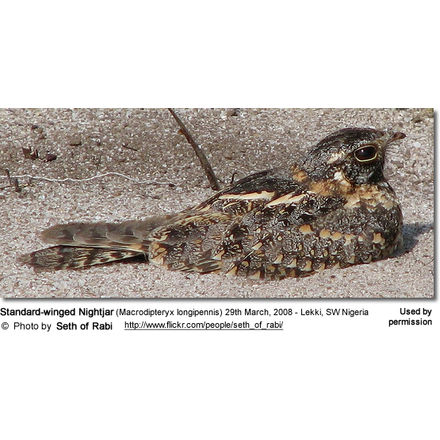 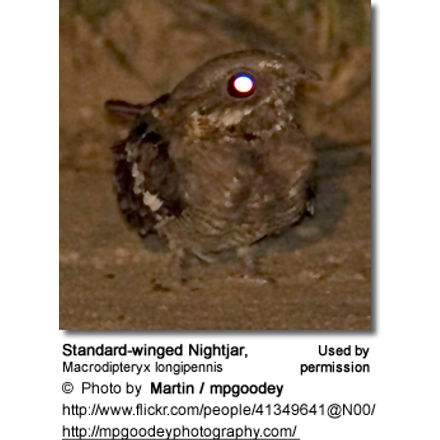 The Standard-winged Nightjar (Macrodipteryx longipennis) is an African nightjar that occurs from Senegal east to Ethiopia, where they inhabit dry savannah habitats. It is related to the Pennant-winged Nightjar with which it shares notable similarities in breeding strategies, roosting and feeding habits, as well as vocalizations.

The Standard-winged Nightjar’s range stretches from Gambia and western Liberia through central Cameroon and north tothe Democratic Republic of the Congo to southwestern Sudan, south to northern Uganda and possibly northwestern Kenya.

During the dry seasons, from December through March, they are mostly found along thecoast from Liberia to western Cameroon, as well as southeastern Uganda.

They are native to the following African countries:

The Standard-winged Nightjar is commonly heard within its range, but less often seen – due to its nocturnal habits. Its brown-mottled plumage keeps it well camouflaged during the day, when it is also usually hidden away sleeping. They usually fly at dusk, most often at sundown, and are often observed together with Fruit Bats (or Flying Foxes)

Their cryptic appearance blends perfectly into their habitat and during the daytime, they are usually hidden away sleeping. They are most easily detected at night when light from car headlights are reflected ruby-red from their eyes, as they are sitting on tracks or roads. However, their presence is most often made known by their loud calls given at dusk. 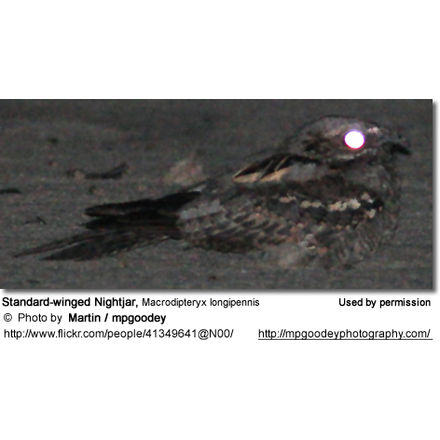 The Standard-winged Nightjar has a height of about 8 – 9 inches (20 – 23 cm). Its tail is relatively short and his song consists of a churring trill

The plumage is a mostly variegated grey, with a browner-toned collar and without the white patches in the wings or tail that are typically seen in other nightjars.

The male can be easily identified from the female by the broad white band over the otherwise black primaries (the longest wing feathers). Males also grow a 9th primary feather on each side of the wing during the breeding season, which will grow longer to about 15 inches or 38 cm – much longer than the length of its body. The male usually loses these long ornamental wing feathers after the breeding season — either they fall or are broken off.

Once that happens, there are no plumage distinctions between the male and female. 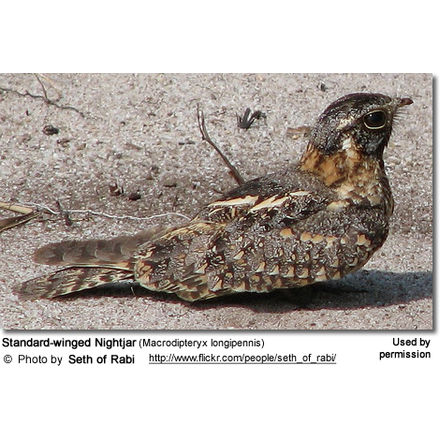 The Standard-winged Nightjars are most active, and mostly feed, near dawn and dusk (crepuscular – active during the twilight). 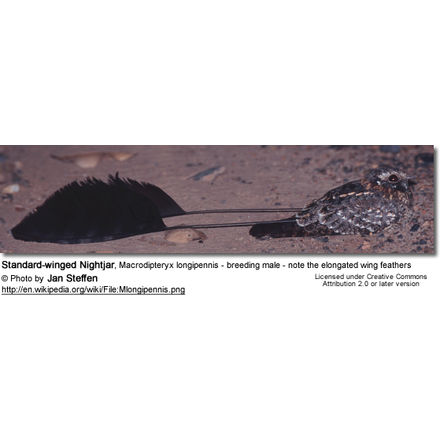 The male establishes his breeding his territory and attracts the attention of females with an insect-like song, and he performs a display flight, wherein receptive females will join in.

Standard-winged Nightjars are bigamous — meaning they will take on more than a single mate.

The female may lay one to two eggs (mostly two) that are reddish creamy / pinkish in color, with brown and spots or blotches.

The hatchlings are covered in down and are capable of short-distance movements within 24 hours of hatching. They usually move apart shortly after hatching, maybe to make it more difficult for predators to spot them. The parents also shove them apart with their feet as they flush from the nest. The male usually stands guard and defends the nest and the young. He will hover in place near the nest with his body in a nearly vertical position and his tail spread. The adults communicate with their young via soft clucking sounds to which the chicks respond.