The Steller’s Eider (Polysticta stelleri) is a medium-large sea duck, which breeds along the arctic coasts of eastern Siberia and Alaska.

It winters somewhat further south in the Bering Sea, northern Scandinavia and the Baltic Sea. It can form large flocks, up to 200,000 birds on suitable coastal waters. It is scarce south of its wintering range. 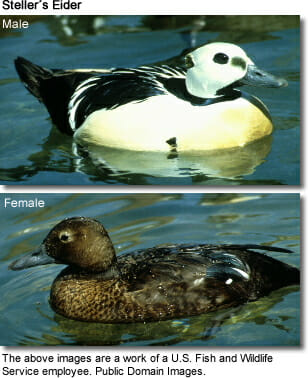 Steller’s Eider is thought to have hybridised with Common Eider on at least two occasions in the wild. A drake showing characters of both species was present at Cuxhaven, Niedersachen, Germany on 17 November 1993.

Another drake was seen in Vadso harbour, Varanger, Norway on 7 April 1995; a photograph of this bird was published accompanying Forsman (1995).

This bird is named after the German naturalist Georg Steller.

The Steller’s Eider is one of the species to which the Agreement on the Conservation of African-Eurasian Migratory Waterbirds (AEWA) applies.

The lined nest is built on tundra close to the sea, and 6-10 eggs are laid.

This species is the smallest eider. The male is unmistakable with its black upperparts and neck collar, white head and yellowish underparts. The drake’s call is a deep crooning, although it is relatively quiet compared to the Somateria eiders.

The female is a dark brown bird, smaller with a more typically duck-shaped head and body than other eider species. She also has a repertoire of grunts and whistles.

This species dives for crustaceans and mollusks, with mussels being a favoured food.

Steller’s Eiders dive for crustaceans and mollusks. Mussels are their favored food.