The Striated Caracara, (Phalcoboenus australis) is a bird of prey of the Falconidae family. In the Falkland Islands it is known as Johnny Rook.

It breeds in several islands in the Tierra del fuego, but is more abundant in the Falklands where the population is estimated at 500 breeding pairs.

The adults plumage is almost black in color, while the legs and lores are orange and the neck is flecked with grey.

The first year juveniles have an orange or light red down, which they lose after their first moult. Full adult plumage is acquired only in the fifth year.

Often it is known to steal red objects such as clothing or handkerchiefs, possibly because red is the color of meat. Like all falconiformes it has excellent colour vision which easily surpasses that of any known mammal

Often it will also raid dustbins and move rocks to get food from underneath, thus proving themselves to be one of the most intelligent of the birds of prey. 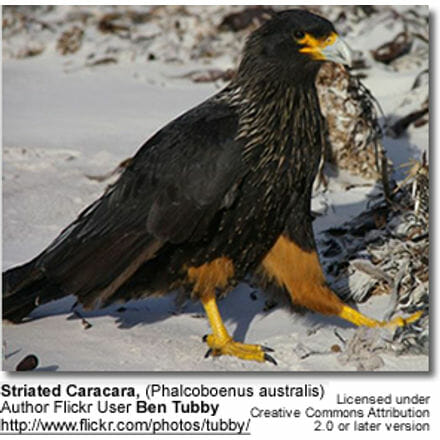 The Striated Caracara is primarily a scavenger, feeding on carrion, offal (= entrails and internal organs of butchered animals) and small invertebrates that it digs up with its claws.

However, it will also prey on weak or injured creatures, such as young seabirds. Its habit of attacking newborn lambs and weakened sheep has led it to be ruthlessly persecuted by sheep farmers.

The nest is built on the ground or on a cliff ledge, where the female will lay up to 4 eggs.

Their hatching is timed to coincide with the nesting season of seabirds, providing a constant food supply for the chicks. Once these have fledged, they gather into flocks and roam through the islands, often close to human settlements. 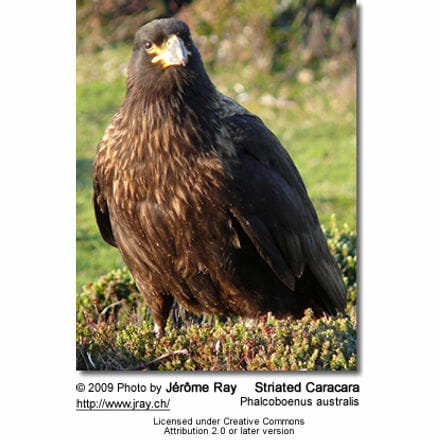 Though it was once considered common in the Falklands archipelago, it now only nests in the outlying islands where it breeds around penguin and albatross colonies.

Juveniles and indeed, adults, are almost entirely fearless of humans and treat their approach with indifference.

Over time, conflict with the sheep farmers has led to a great reduction in their numbers. This is now being corrected by the Falkland Islanders.