They are closely related to the Crested Goshawks (Accipiter trivirgatus). Their numbers appear to be decreasing; however, they are – at this point in time – not considered at risk of extinction. 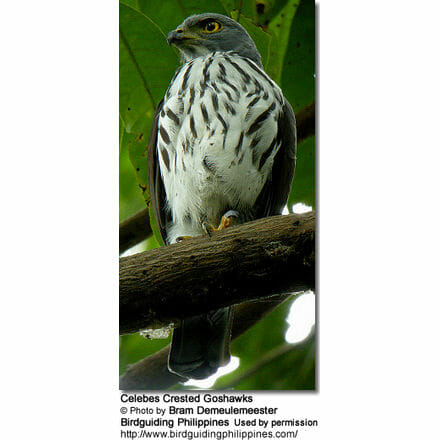 The Sulawesi Goshawks are endemic to the Sulawesi sub region, including the island of Sulawesi (where they are most easily observed in the Dumoga-Bone National Park on the Minahassa Peninsula), as well as being found on the adjacent islands of Togian, Muna and Butung.

They are mostly found in the interior of primary lowland and montane forests, as well as frequenting mangroves, tall secondary woodland, and areas around villages. They occur from lowland areas up to about 7,200 feet (2,200 m).

They are mostly non-migratory; except for juvenile dispersal from the breeding areas.

They are generally seen alone or – particularly during the breeding season – occasionally in pairs.

This small goshawk measures about 13 – 15 inches (~ 33 – 38 cm) in length (including the tail). The upper plumage is dark brown, except for a greyish head and a white upper chin. The plumage below is white, with heavy dark brown streaking on the chest and some finer barring on the thighs.

The tail is broadly barred black-brownish. 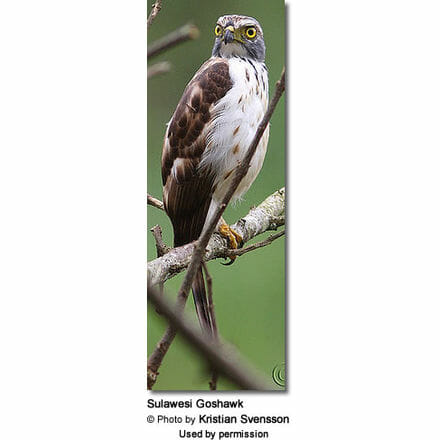 Sulawesi Goshawks mostly feed on small mammals (i.e., rodents), birds, lizards, and large insects. Their most common hunting technique consists of hiding indense foliage and swooping down on prey they spot on the ground.

Very little data is available with respect to their reproductive activities. Only one nest was reported in a medium-tall tree in montane forest.