The Summer Tanagers (Piranga rubra) were formerly placed in the tanager family (Thraupidae), but they are not categorized as cardinals (Cardinalidae).

Its plumage and vocalizations are similar to other members of the cardinal family. Adults have stout pointed bills.

Males are bright rose or orange-red throughout the year, and are distinguished from the scarlet tanager because their plumage is paler–not an intense scarlet–and because the summer tanager’s wings and tail are red rather than black. Adult male summer tanagers generally have no crest. However, if agitated, may raise some feathers on the head into a slight crest.

Females are olive above and orange-yellow below. They have conspicuous narrow yellow edging on their wing coverts. The wings and tail are olive-brown. Some females develop complete male pigmentation as they age. 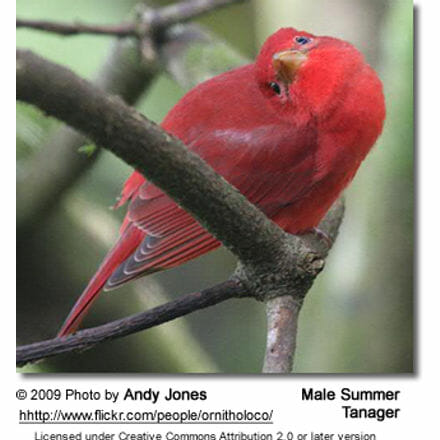 There are two recognized subspecies of summer tanagers.

They can be found throughout the southern and eastern United States south of southern Pennsylvania and northern Illinois. Their breeding habitat is open wooded areas, especially with oaks.

For the winter, they migrate to Mexico, Central America and northern South America (as far south as Bolivia and Brazil). This tanager is an extremely rare vagrant to western Europe. 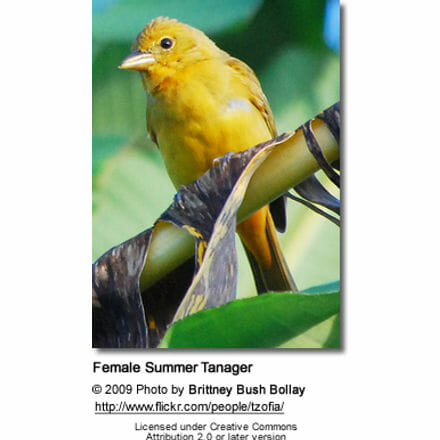 The Summer Tanager has an American Robin-like song, similar enough that novices sometimes mistake this bird for that species. However, the Summer Tanager’s song is much more monotonous than that of the American Robin, often consisting of as few as 3 or 4 distinct units. It is clearer and less nasal than the song of the Scarlet Tanager.

Its call sounds like a sharp, agitated pi-tuk or pik-i-tuk-i-tuk.

Their breeding habitat is open wooded areas, especially with oaks, across the southern United States. They build a cup nest on a horizontal tree branch.

Their staple diet consists of insects, especially bees and wasps, and berries.

They are sometimes seen flying out to catch insects in flight and then kills them by beating them against a branch. Before eating a bee, the summer tanager removes the stinger by rubbing it on a branch.

The fruit of the Cymbopetalum mayanum (Annonaceae custard apple family) are especially popular with these birds and will entice them to residential areas. They will also visit bird feeders.