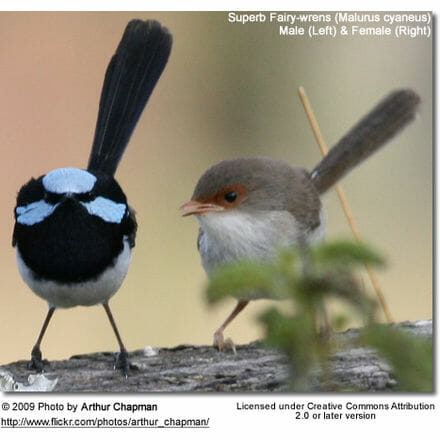 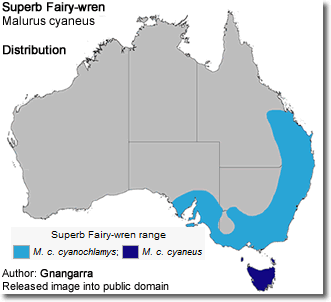 The Superb Fairy-wren (Malurus cyaneus) is the best-known of all fairy-wrens, and in south-eastern Australia is frequently known simply as the blue wren.

Superb Fairy-wrens occupy wide range of habitat types, and are found in almost any area that has at least a little dense undergrowth for them to shelter in, including grasslands with scattered shrubs, moderately thick forest, woodland, heaths, and domestic gardens.

The Superb Fairy-wren is common throughout most of the relatively wet and fertile south-eastern corner of the continent, from the south-east of South Australia (including Kangaroo Island and Adelaide) and the tip of the Eyre Peninsula, through all of Victoria, Tasmania, coastal and sub-coastal New South Wales and Queensland, through the Brisbane area and extending inland – north to the Dawson River and west to Blackall; it is a common bird in the suburbs of Sydney, Melbourne and Canberra. 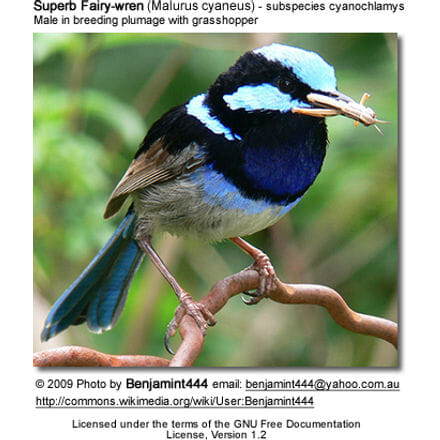 It is found in wooded areas, generally with plenty of undergrowth, and has also adapted to urban existenceand can be found in gardens and urban parks as long as there is an undergrowth of native plants nearby. Lantana (Lantana camara), a prolific weed in Australia, has also been beneficial in providing shelter in disturbed areas, as has the introduced and invasive blackberry (Rubus spp.)

Unlike other fairy-wrens, it appears to benefit from the urban environment and has out-competed the introduced House Sparrow (Passer domesticus) in one study on the grounds of the Australian National University in Canberra.] Colonies of wrens can be found in Hyde Park and the Royal Botanic Gardens in Sydney’s urbanized centre. It is not found in dense forest nor in alpine environments. Forestry plantations of pine (Pinus spp.) and eucalypts are also unsuitable as they lack undergrowth.

Like other fairy-wrens, the Superb Fairy-wren is notable for its marked sexual dimorphism (visual physical differences between the sexes), males adopting a highly visible breeding plumage of brilliant iridescent blue contrasting with black and grey-brown. The brightly colored crown and ear tufts are prominently featured in breeding displays. 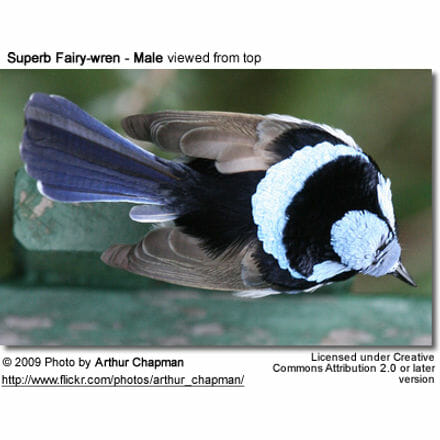 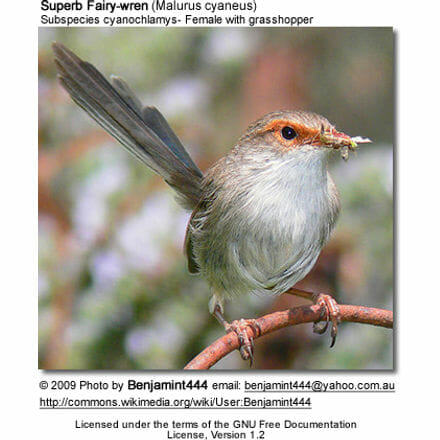 Females, immatures, and non-breeding males are a plain fawn colour with a lighter underbelly and a fawn (females and immatures) or dull greyish blue (males) tail. The bill is brown in females and juveniles and black in males after their first winter. Immature males moult into breeding plumage the first breeding season after hatching, though incomplete moulting sometimes leaves residual brownish plumage that takes another year or two to perfect.

Both sexes moult in autumn after breeding, with males assuming an eclipse non-breeding plumage. They moult again into nuptial plumage in winter or spring.

Breeding males’ blue plumage, particularly the ear-coverts, is highly iridescent due to the flattened and twisted surface of the barbules. The blue plumage also reflects ultraviolet light strongly, and so may be even more prominent to other fairy-wrens, whose colour vision extends into this part of the spectrum. 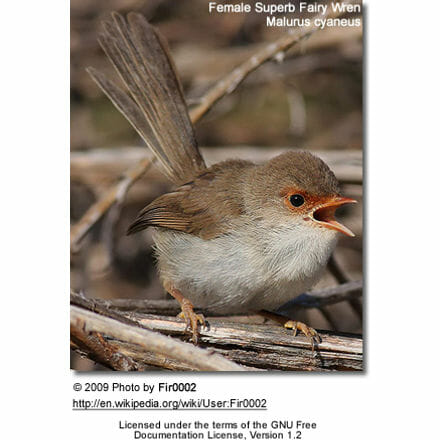 Vocal communication among Superb Fairy-wrens is used primarily for communication between birds in a social group and for advertising and defending a territory.

The basic, or Type I, song is a 1–4 second high-pitched reel consisting of 10–20 short elements per second; it is sung by both males and females. Males also possess a peculiar song-like Type II vocalization, which is given in response to the calls of predatory birds, commonly Grey Butcherbirds (Cracticus torquatus).

The purpose of this behavior, which does not elicit a response from other nearby wrens, remains unknown. It is not a warning call, but in fact gives away the location of the vocalizing male to the predator. It may serve to announce male fitness, but this is far from certain.

Superb Fairy-wrens’ alarm call is a series of brief sharp chits, universally given and understood by small birds in response to predators. 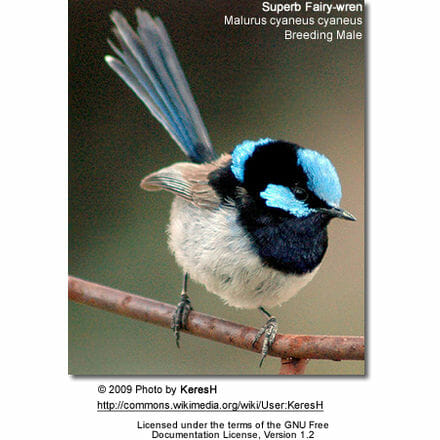 Like all fairy-wrens, the Superb Fairy-wren is an active and restless feeder, particularly on open ground near shelter, but also through the lower foliage. Movement is a series of jaunty hops and bounces, with its balance assisted by a proportionally large tail, which is usually held upright, and rarely still.

The diet is a wide range of small creatures, mostly insects, supplemented by small quantities of seeds, flowers, and fruit.

Another interesting habit of males of this and other fairy-wren species during the reproductive season is to pluck petals (in this species, yellow ones which contrast with their plumage) and show them to conspecifics (of, or belonging to, the same species) (Karubian and Alvarando 2003). The obvious conclusion would be that this is a form of courtship (when directed at females) and/or antagonistic behavior (when directed at other males). However, research, while suggesting a courtship rather than antagonistic function of this behavior, has failed to show a good correspondence between petal-carrying and mating success in the related Red-backed Fairy-wren. It is notable that fairy-wrens are socially monogamous and sexually promiscuous: pairs will bond for a long time, but mate with other individuals.

Young are often raised not by the pair alone, but with other males who also mated with the pair’s female assisting. Thus, petal-carrying might be a behavior that strengthens the pair-bond. Petal carrying might also be a way for extra males to gain matings with the female. 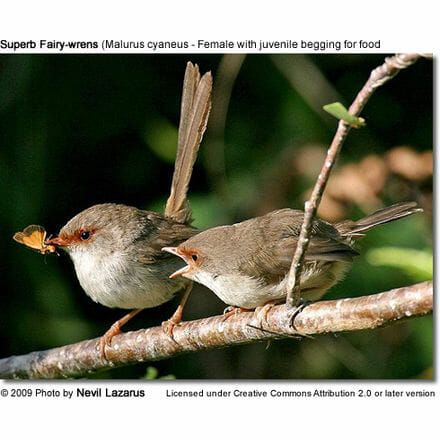