The Swamp Sparrow (Melospiza georgiana) is related to the Song Sparrow.

Swamp Sparrows spend their summers in the eastern half of the Northern United States south to Missouri, Ohio and Maryland, as well as large portions of Canada from Newfoundland west to the Rockies.

They winter in the eastern United States from Texas, the Gulf Coast and Florida north to Iowa, the southern Great Lakes, and Massachusetts; as well as Mexico. They rarely, but regularly, visit Utah as well.

They favor open wetlands, such as cattail and sedge marshes, shrubby wetlands, and other similar habitats; and frequent lake and streamside marshes.

The plumage of adults is streaked rusty, buff and black on top with a grey breast, light belly and a white throat. The wings are rust-colored. The face is grey in the summer, and generally browner in winter. It has a short bill and long legs. There is a dark line through the eyes. Most males and a few females have rust-colored caps.

The adult breeding female looks similar to the male, but tends to have a less extensive rufous crown which is more heavily streaked with black.

Juvenile birds and winter adults usually have two brownish / blackish crown stripes, as well as black streaking on the nape (back of the neck), sides of the neck, breast and flanks. Much of the grey is replaced with buff. The beak is initially flesh-colored.

The subspecies Melospiza georgiana nigrescens has more black in a greyer overall plumage and a larger beak.

In some parts of its range, the numbers of the Swamp Sparrows have declined due to habitat destruction.

The nest is usually located about a foot above water in low brush, grass tussock or sedge. The bulky nest averages 40 inches in outside diameter with a smaller inside nest cup that is about 2.4 inches in diameter and 1.5 inches in depth.

The female lays up to two clutches are laid each year; and she alone incubates the eggs for about 12 to 15 days before hatching. The chicks are fed by both parents. The young fledge about 11 to 13 days after hatching. 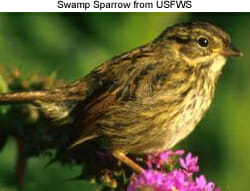 Swamp Sparrows mostly eat insects — during the winter, its diet consists of about 55 percent insect and during the spring and summer (breeding season), the percentage of insects in their diet is about 88 percent – due to their higher requirement of protein at that time. The rest of their diet is made up of seeds, such as sedges, smartweed, panicgrass and vervain.

Swamp Sparrow feeds either on the ground – often in the mud near the water’s edge – or by wading in shallow water or in marsh vegetation.

The Swamp Sparrow’scall note is a loud chip reminiscent of a phoebe and its song is a slow monotone trill. It is slower than that of the Chipping Sparrow.

Themale is reported to have a repertoire of several distinctively different trills.