The Swedish Ducks (Anas platyrhynchos domesticus) are medium-sized, domesticated ducks that are often simply known as the “Swedish.”

A group of ducks is called a “brace”. The male duck is known as “drake,” the female as simply “duck” or “hen,” and a juvenile duck (chick) is referred to as “duckling.”

All varieties have a distinctive white bib on the neck and chest. Some argue that, genetically seen, there is “no such thing as a Black Swedish” and that this coloration is the result of an unstable blue-blue mating. Nonetheless, different plumage colorations add some variety and, some might argue, interesting aspects to breeding this species. 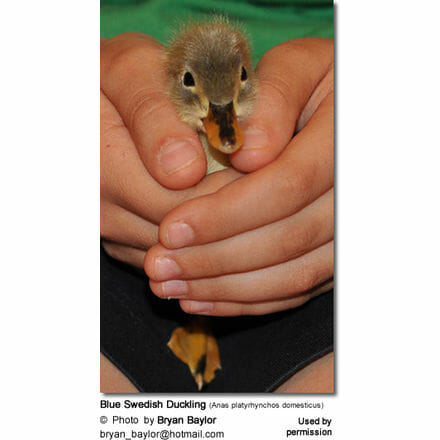 This breed was developed as early as 1835 by farmers in Pomerania, which nowadays comprises the coastal regions of Germany, Holland and Belgium – but for many years in the past, this area was under the Swedish throne (hence this breed’s name).

They were first imported into the North America in 1884. This breed was admitted into the American Standard of perfection in 1904.

Blue Swedish Ducks have a mallard ancestry, and this breed has been developed for domestic uses, such as meat and egg production, as well as for use as decorative and ornamental ducks, or for enjoyment as pets. Even though they can fly, they rarely do, making them good choices as garden pets.

It has been listed on the “watch” list by the American Livestock Breeds Conservancy, which means that there are fewer than 2500 individuals found in the United States and fewer than 5000 in the world. It is, therefore, considered to be an endangered breed. 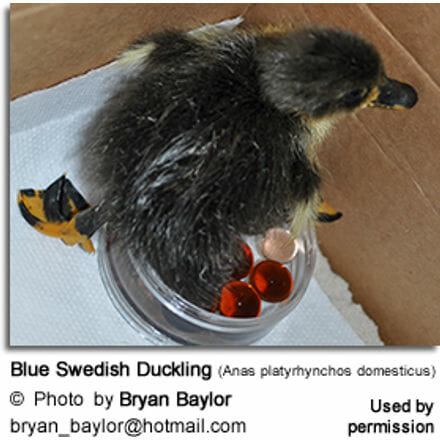 Considerations for Keeping this Species

Swedish Ducks are generally considered great pets because of their calm disposition; the only exception being during the mating season when they may display aggressive behavior towards other ducks (males or females).

They are reasonably active and one of the heartiest of all the breeds. They are generally considered good “beginner’s ducks. “

However, they require shelter from wind and rain, easy access to food and water, and fencing to keep them contained and protect them from predators. If predation is not a problem, a low fence suffices, as they only have limited flight ability. It should be kept in mind that this breed is not doing so well in confinement. Plenty of space needs to be provided. Trees and shrubs can serve as shelter. They love to free range and do well in orchards or paddocks in which it can feed on grass and natural foods, such as insects. In fact, they do a great job of keeping insect populations down in gardens.

Even those that are kept singly may go broody. If two ducks of the same gender are kept together, they will go through the mating process – obviously without producing any young. If there are two females, both females will lay infertile eggs, and two males won’t produce any eggs, but will still go through the process. Same gender mating can also be seen when there are many more males than females.

If chicks are the goal, most success has been reached when keeping them in pairs or as a trio – with two females and one male.

When selecting breeding stock, your best bet will be strong, well-muscled birds – avoiding those with short, narrow or shallow bodies, narrow heads, and excessively long bills. 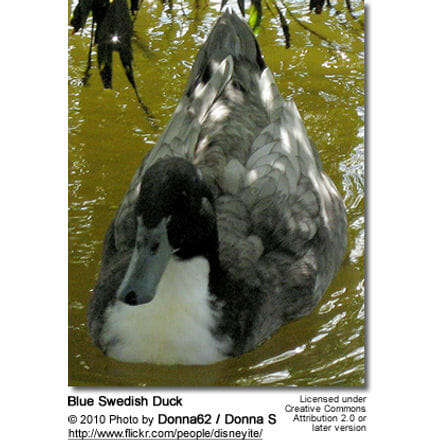 Swedish Ducks are medium-sized ducks – similar in size to Rouen Ducks, larger than mallards and smaller than geese. Their body type is very close to that of the Pekin Duck. Their brownish legs are set further back than those of a mallard duck giving the Swedish Duck a more upright stance – like that of a Campbell Duck.

The plumage varies in color from light grey, slate-grey / blue, tan / brown to black with a white bib that runs from under the bill halfway down the chest. It is considered a fault (for exhibition purposes) if the bib extends around the neck.There is also some pretty iridescence to their plumage.

According to the American Standard, their outer two or three wing flight feathers should be white – but this is not always the case. As these ducks age, some may also develop more white feathering – on the wings or around the bib. A crested variety of the Swedish has also been developed. 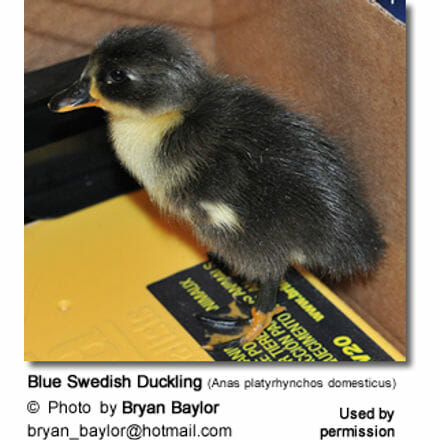 Swedish Ducks lay between 100 and 180 eggs per year. Most of the eggs are white, but occasional blue, green or grey tinted eggs are produced.

Depending on the stage of incubation, eggs weigh between 65 – 90 grams. The eggs are incubated for about 28 days to hatching.

A pair of Blue Swedish will hatch …

Blue Swedish ducks will reach adult size when they are about 16 weeks.