Swiftlets or cave swiftlets are birds contained within the four genera Aerodramus, Hydrochous, Schoutedenapus and Collocalia. They form the Collocaliini tribe within the swift family Apodidae.

The group contains around thirty species mostly confined to southern Asia, south Pacific islands, and northeastern Australia, all within the tropical and subtropical regions.

They are in many respects typical members of the Apodidae, having narrow wings for fast flight, with a wide gape and small reduced beak surrounded by bristles for catching insects in flight.

What distinguishes many but not all species from other swifts and indeed almost all other birds is their ability to use a simple but effective form of echolocation to navigate in total darkness through the chasms and shafts of the caves where they roost at night and breed.

The nests of some species are built entirely from threads of their saliva, and are collected for the famous Chinese delicacy bird’s nest soup.

The swift family remains one of the more complicated groups of birds in taxonomic research, but the swiftlet tribe is a rather well-defined group. Its internal systematics is confusing; the plumage is usually dull, with shades of black, brown, and gray; from their outward appearance, most species are very similar. Swiftlets have four toes, except the Papuan swiftlet which lacks the hallux (back toe).

Their legs are very short, preventing the birds from perching, but allowing them to cling to vertical surfaces. Flight is mainly gliding due to very long primary feathers (flight feathers) and small breast muscles. The larger Aerodramus swiftlets weigh about 14 grams and are 10 cm long.

Swiftlets are insectivores; hymenopterans and dipterans being the most abundant prey (Lourie and Tompkins, 2000).

Typically, they leave the cave during the day to forage and return to their roost at night. Males and females look similar; as usual in such cases, these birds are monogamous and both partners take part in caring for the nestlings.

Males perform aerial displays to attract females and mating occurs at the nest.

The breeding season overlaps the wet season, which corresponds to an increased insect population. Clutch size depends on the location and the food source, but it is generally not large; Aerodramus swiftlets lay 1-2 eggs. The eggs are a dull white color and are laid every other day.

Many if not all species are colonial nesters; some build their nests in high, dark corners on cave walls. Swiftlets in temperate zones do migrate but, most Aerodramus swiftlets live in the tropical Indo-Pacific region and do not migrate.

These birds usually remain in one cave or other roosting/nesting site. Some examples of caves include the Niah Caves at Niah National Park and Gunung Mulu National Park which are all located in Sarawak, Malaysian Borneo.

The genus Aerodramus is of special interest due to its use of echolocation and their intricately constructed saliva nests which in some species contain no other material such as feathers, moss or twigs and are collected, selling at extremely high prices (see bird’s nest soup).

It has been argued that the high demand for these nests could have had an adverse effect on their populations (Hobbs, 2003; Marcone, 2005) but other authorities (Jordan, 2004) have shown that modern techniques of nest farming have increased the bird population.

The use of echolocation was once used to separate Aerodramus from the non-echolocating genera Collocalia and Hydrochous (virtually nothing is known about Schoutedenapus).

But recently, the Pygmy Swiftlet Collocalia troglodytes was discovered making similar clicking noises in and outside their cave (Price et al., 2004).

Characteristics of behavior, such as what materials apart from saliva the nests contain, can be used to differentiate between certain species of Aerodramus (Lee et al., 1996). 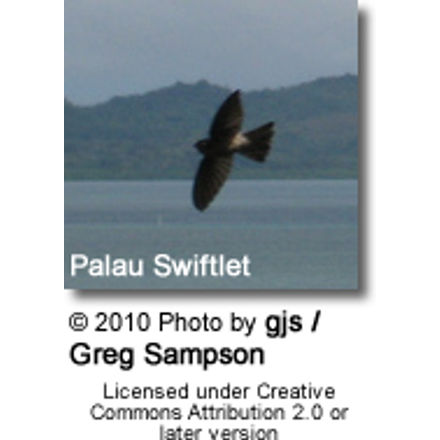 The genus, Aerodramus was thought to be the only echolocating swiftlets. These birds use echolocation to locate their roost in dark caves. Unlike a bat’s echolocation, Aerodramus swiftlets make clicking noises that are well within the human range of hearing.

The clicks consist of two broad band pulses (3-10 kHz) separated by a slight pause (1-3 milliseconds). The interpulse periods (IPPs) are varied depending on the level of light; in darker situations the bird emits shorter IPPs, as obstacles become harder to see, and longer IPPs are observed when the bird nears the exit of the cave.

This behavior is similar to bats as they approach targets. The birds also emit a series of low clicks followed by a call when approaching the nests; presumably to warn nearby birds out of their way.

It is thought that the double clicks are used to discriminate between individual birds. Aerodramus sawtelli, the Atiu Swiftlet, and Aerodramus maximus, the Black-nest Swiftlet are the only known species which emit single clicks.

The single click is thought be used to avoid voice overlap during echolocation. The use of a single click might be associated with an evolutionary shift in eastern Pacific swiftlets; determining how many clicks the Marquesan Swiftlet emits, could shed light on this.

It was also discovered that both the Atiu Swiftlet (Fullard, 1993) and the Papuan swiftlet (Price et al., 2005) emit clicks while foraging outside at dusk; the latter possibly only in these circumstances considering it might not nest in caves at all.

Such behavior is not known to occur in other species (Fullard, 1993) but quite possibly goes given that the Papuan and Atiu Swiftlets are not closely related.

However, it has recently been determined that the echolocation vocalizations do not agree with evolutionary relationship between swiftlet species as suggested by DNA sequence comparison (Thomassen and Povel, 2006). This suggests that as in bats, echolocation sounds, once present, adapt rapidly and independently to the particular species’ acoustic environment.

Three hypotheses are considered to describe how echolocation evolved in the genus Aerodramus and, as determined more recently, other taxa in the Apodidae.

One hypothesis states that echolocation evolved from an ancestral species of swiftlets and was lost in the genera which lack echolocation.

A second hypothesis is that echolocation evolved independently several times.

The third scenario involves a combination of the first two, i.e. a gain-loss-regain scenario.

Several functional subunits (like vocal muscles and brain areals) are needed to produce the echolocating system. Past studies have thought that the loss of one of these subunits was more likely to occur than acquiring all the traits needed to echolocate.

But a recent study (Thomassen et al., 2005) suggests that the echolocation subunits were mainly located in the central nervous system, while the subunits in the vocal apparatus were already present and capable of use before echolocation even evolved.

Authentic bird’s nest soup is made from nests of some species of swiftlet, mainly the Edible-nest (or White-nest) swiftlet (Aerodramus fuciphagus) and the Black-nest Swiftlet.

Instead of twigs, feathers and straw, these swiftlets make their nest only from strands of their gummy saliva, which harden when exposed to air.

Once the nests are harvested, they are cleaned and sold to restaurants. Eating swiftlet nest material is believed to help maintain skin tone, balance qi (“life energy”) and reinforce the immune system. It is also believed to strengthen the lungs and prevent coughs, improve the constitution and prolong life.

The energy contained in 100 g of swiftlet nest is 345 kcal. The nests are often served simmered in chicken broth.

Authentic bird’s nest soup is quite popular throughout Asia. It is also extremely expensive; many western restaurants serve a less expensive version consisting of soup with noodles shaped to resemble a bird’s nest.

Guano from both the swiftlets and the many bats that inhabit the caves supports a huge array of specialized animals that feed on the dung.

There are yet other creatures that have evolved to feed on these dung eaters as well as on the bats and the swiftlets themselves, including snakes that can climb the sheer walls to snatch a passing meal and huge carnivorous crickets that prey on chicks and bat pups.

This cave fauna ecosystem is self-sustaining, the only link with the outside being the birds and the bats that bring the nutrients into the caves in the first place.

The Philippine municipality of El Nido in Palawan, known for its limestone cliffs and pristine beaches is home to a thriving Bird’s Nest market. The name El Nido is the Spanish term for literally “The Nest”. Many locals still practice manual climbing of the limestone caves to gather Swiftlet nests.