The swifts are a family, Apodidae, of highly aerial birds. They are superficially similar to swallows but are actually not closely related to passerine species at all; swifts are in the separate order Apodiformes, which they share with the hummingbirds.

The treeswifts are closely related to the true swifts, but form a separate family, the Hemiprocnidae.

The resemblances between swifts and swallows are due to convergent evolution reflecting similar life styles based on catching insects in flight.

The family scientific name comes from the Ancient Greek απους, apous, meaning “without feet”, since swifts have very short legs and never settle voluntarily on the ground, perching instead on vertical surfaces. The tradition of depicting swifts without feet continued into the Middle Ages, as seen in the heraldic martlet.

Swifts are the most aerial of birds. Larger species, such as White-throated Needletail, are amongst the fastest flyers in the animal kingdom. Even the common swift (Apus apus) cruises at 5 to 14 metres per second (18-50 km/h, 11-31 mph) and is capable of 60 metres per second (216 km/h, 134 mph) for short bursts (sources needed).

One group, the Swiftlets or Cave Swiftlets have developed a form of echolocation for navigating through dark cave systems where they roost.

One species, Aerodramus papuensis has recently been discovered to use this navigation at night outside its cave roost also.

Swifts have a worldwide distribution in arctic and temperate areas, but like swallows and martins, the swifts of temperate regions are strongly migratory and winter in the tropics. Some species can survive short periods of cold weather by entering torpor, a state similar to hibernation.

Many have a characteristic shape, with a short forked tail and very long swept-back wings that resemble a crescent or a boomerang. The flight of some species is characterised by a distinctive “flicking” action quite different from swallows. 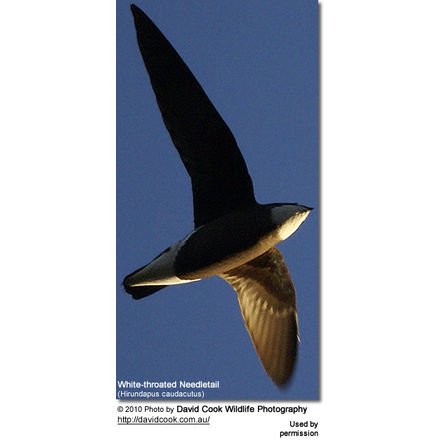 The nest of many species is glued to a vertical surface with saliva, and the genus Aerodramus use only that substance, which is the basis for bird’s nest soup. The eggs hatch after 19 to 23 days, and the young leave the nest after a further six to eight weeks. Both parents assist in raising the young.

Swifts and treeswifts have long been considered to be relatives of the hummingbirds, a judgement corroborated by the discovery of the Jungornithidae, which were apparently swift-like hummingbird relatives, and of primitive hummingbirds such as Eurotrochilus.

Traditional taxonomies place the hummingbird family (Trochilidae) in the same order as the swifts; the Sibley-Ahlquist taxonomy places them in a new order, Trochiliformes, which forms a superorder with the swifts and treeswifts (and no other birds).

The taxonomy of the swifts is in general complicated, with genus and species boundaries widely disputed, especially amongst the swiftlets.

Analysis of behavior and vocalizations is complicated by common parallel evolution, while analyses of different morphological traits and of various DNA sequences have yielded equivocal and partly contradictory results (Thomassen et al., 2005).

The Apodiformes diversified during the Eocene, at the end of which the extant families were present; fossil genera are known from all over temperate Europe, between today’s Denmark and France, such as the primitive Scaniacypselus (Early – Middle Eocene) and the more modern Procypseloides (Late Eocene/Early Oligocene – Early Miocene).

A prehistoric genus sometimes assigned to the swifts, Primapus (Early Eocene of England), might also be a more distant ancestor. 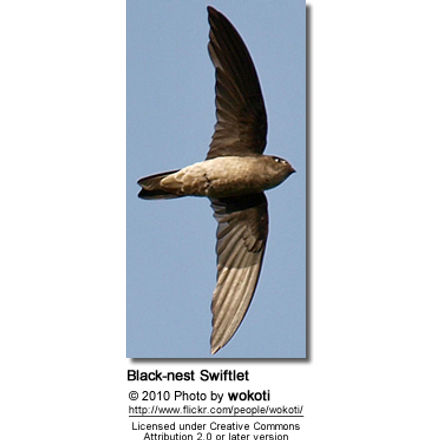