The Taita Falcon (Falco fasciinucha) – also sometimes referred to as Teita Falcon – was first identified in the Taita Hills of Kenya hence its name. It is one of the smallest Falcons in the Southern African Sub-region.

It occurs throughout the eastern portion of subsaharan Africa but is mostly found in Kenya.

There are a few nesting sites in Zimbabwe (Zambezi River) and Northeastern South Africa. It is also rather scarce and relatively endangered. In Southern Africa itself, there are a few regular breeding sites where the birds can regularly be found.

Its head is mostly pale chestnut, with the crown, moustachial streak, a line behind eye, and the sides of the nape black.

The rest of its upper parts, including the wings, are dark grey, becoming paler on the rump and upper tail coverts, and on the tail, which has darker bars.

Below, the chin and throat are light buff, while the rest of the under parts are tawny with narrow black stripes, more chestnut on the thighs. The eyes are dark brown, the cere, legs and feet yellow.

Immatures differ in that the shafts of the feathers of its chest and abdomen are blackish brown, and the axillaries (feathers under the wing – the “armpit” or “wingpit” of a bird) and under wing-coverts (the feathers at the leading edge of the wing, covering the bases of the secondaries (shorter, upper “arm” feathers) and primaries are heavily barred with blackish brown.

The rump is darker than that of the adult, not grey. The wing quills and scapulars (shoulder feathers) are tipped with pale buff. 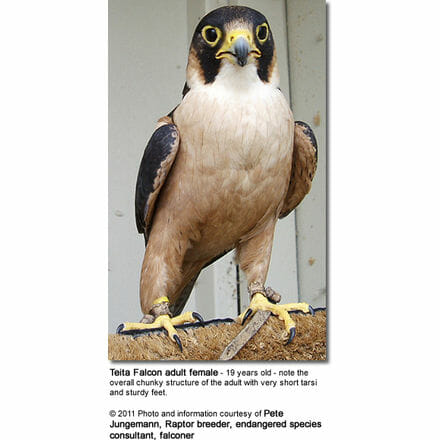 This small falcon is fairly distinctive, but may offer some confusion with a few other species

It looks a lot like a tiny Peregrine, with its short and strong body, and with pointed wings and a clear grey rump. Its courting/mating period is similar to that of the Peregrine Falcon. The same applies to its vocal as well as territorial preference.

It is not as long-winged as a Hobby and may be distinguished from all Hobbies by its general appearance and the absence of dark chestnut on the under side. The very white chin helps to distinguish it from the African Hobby, Falco cuvieri.

Status and behavior in the wild

This falcon is very rare throughout its range, and is usually found only in mountainous country.

It has occasionally been seen in the gorge of the Zambezi below Victoria Falls, where it perches on crags or dead trees overlooking the gorge.

In East Africa and Ethiopia it prefers high mountain ranges from 6,000-12,000 feet. There appears no good reason for its rarity, as it feeds on birds like many other small falcons, and should have no difficulty in surviving.

The general habits of these birds are very much like small Peregrines, soaring about the crags and over open country, killing small birds in flight, and roosting on crags or trees. They are accomplished fliers although not quite as swift as Hobbies, and the pair is very often together.

Generally speaking, this species is scarce and relatively endangered.

Its courting/mating period is similar to that of the Peregrine Falcon. The same applies to its vocal as well as territorial preference. The breeding season, in Zimbabwe, extends for at least four months, eggs being laid in early October and the young leaving the nest about Christmas.

During the courtship display pairs perform in paired flights, accompanied by some screaming. They build their nests on deep, inaccessible rock ledges, apparently without any nest material.

At least three eggs are laid, and the young when first hatched are covered in greyish white down. The fledging period is about seven weeks. The young remain in the vicinity of the nest for at least ten days after they fly.

The main diet of the Taita Falcon consists of small birds caught in flight. Their flight is fast and somewhat heavy looking, but they are adept at aerial hunting.

The Taita Falcon has a high-pitched screaming call like some calls of the Peregrine Falcon, but less robust.