The Tapajós Hermit (Phaethornis aethopyga) is a newly discovered South American species of hummingbird that was found at the *Pantanal and in Alta Floresta (a city in Mato Grosso) in Brazil.

During the breeding season, the males of many Hermit species form leks (= competitive mating displays) and congregate on traditional display grounds.  Once a female enters their territory, they display for her.   Their display may entail wiggling of their tails and singing. Willing females will enter the area for the purpose of choosing a male for mating. Oftentimes she will choose the best singer.

The average clutch consists of two white eggs, which she incubates alone, while the male defends his territory and the flowers he feeds on (although hermit males tend to be less aggressive than the males of other hummingbird species). The young are born blind, immobile and without any down. 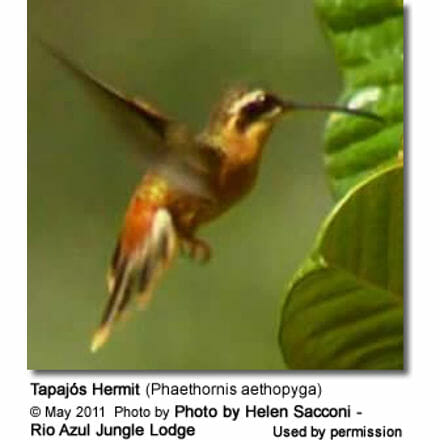 The Tapajós Hermits primarily feed on nectar taken from a variety of brightly colored, scented small flowers of trees, herbs, shrubs and epiphytes.