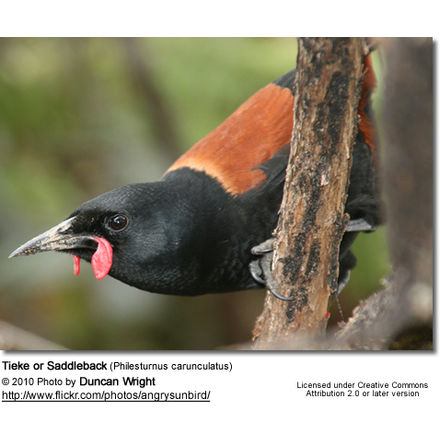 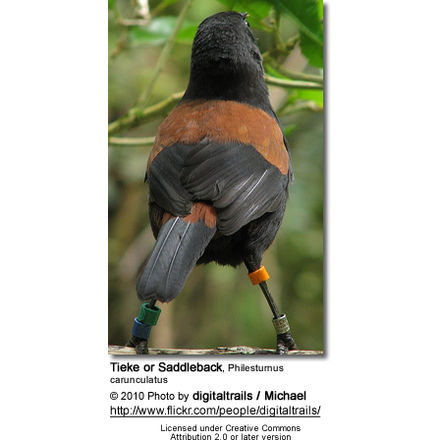 The Tieke or Saddleback Philesturnus carunculatus is a previously rare and endangered New Zealand bird of the family Callaeidae. It is glossy black with a chestnut saddle.

Its taxonomic family is also known as that of the (New Zealand) “wattlebirds” and includes the two subspecies (one for each main island) of the Kokako as well as the extinct Huia. All members of this family have colored fleshy appendages on either side of the beak known as “wattles”. In the case of Saddleback/Tieke, they are a vivid red in colour.

Saddleback are larger than other (avian) arboreal insectivores in the New Zealand forest ecosystem, measuring up to 25 cm in length and weighing up to 75 grams (somewhat larger than a blackbird). They will tear pieces of bark from tree trunks to find insects beneath, which are then dispatched and consumed with their short, robust, and unusually strong beak, but they will also feed on the ground in leaf litter. Their diet is not strictly insectivorous in nature and they have been observed eating fruit and drinking nectar. Poor fliers like their close relative the kokako, saddlebacks mostly bound from branch to branch but can fly noisily over short distances. Territorial birds, saddlebacks display antagonistic behaviour in this regard on three levels of intensity, singing out at dawn to mark their territory, making threat displays, which can include head bobbing, tail fanning, and warbling displays (at the same time the wattles become dilated), and finally, when a direct challenge is made to a bird’s territory, fights can occur in which combatants attempt to grapple with the wattles of their foe.

The birds are notoriously fearless and noisy, and would frequently enchant European naturalists in the 19th century with their behaviour. Saddlebacks will nest in epiphytes, tree fern crowns, or holes in tree trunks.

They have a tendency to nest near the ground, and their fledglings will also leave the nest to hop around in a typically noisy fashion on the ground while they build up strength in their wings. 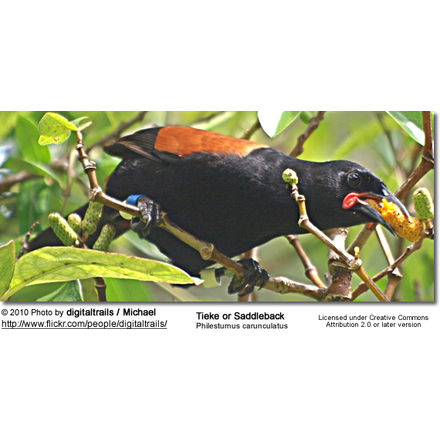 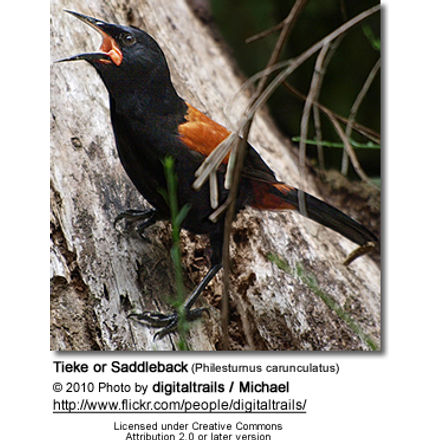 The Saddleback’s cheeky nature is reflected in the Maori legend that tells of how the bird acquired its distinctive chestnut saddle of colour. Fresh from his battle to ensnare the sun, a thirsty Maui (a virtual demi-god in Maori folklore) asked the Tieke to bring him some water. The bird rudely pretended not to hear his request, at which Maui, becoming angry, seized it with his still fiery hand, leaving a brown scorch mark across its back.

Their breeding behaviour (nesting near the ground and fledglings hopping noisily around on the ground) make them especially vulnerable to predation from introduced mammals, including mustelids, Norway- and Ship rats. This resulted in both subspecies swiftly disappearing from the New Zealand mainland. By the turn of the 20th century, both subspecies were confined to a respective island in the far north: Hen Island off Northland, and in the far south, Big South Cape Island off Stewart Island/Rakiura.

Rats arrived on Big South Cape Island in 1963, accidentally introduced as they escaped from the boats of visiting muttonbirders. Only a swift rescue operation by the New Zealand wildlife service (the present day NZ Department of Conservation) saved the subspecies from extinction by the skin of its teeth, while the rats’ predation soon condemned to extinction the local populations of the New Zealand Snipe, Bush Wren and Greater Short-tailed Bat. Today, thanks to careful management by DOC, the South Island saddleback population is up to 700, spread over 11 small islands, from the original 36 birds transferred from Big South Cape Island. The North Island Saddleback has benefited from multiple population reintroductions and is now resident on a large number of off-shore islands and, having become extinct on the mainland 100 years earlier, a breeding colony of North Island Saddleback was successfully established at Karori Wildlife Sanctuary in Wellington in 2002.

The recovery of the Saddleback is considered by many to be one of New Zealand’s greatest conservation success stories. 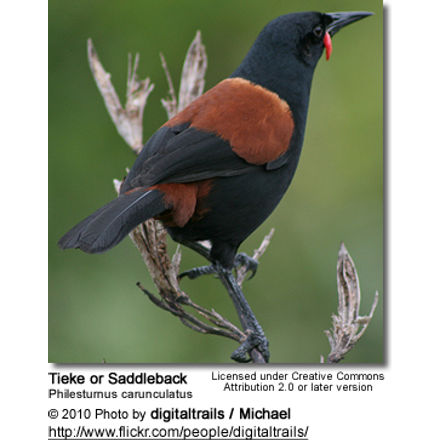