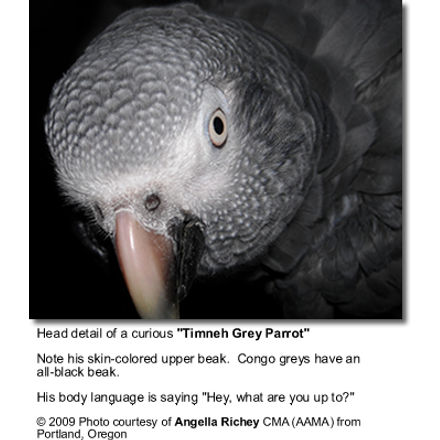 The Timneh African Grey (TAG); (aka Psittacus timneh, previously Psittacus erithacus timneh) was until recently considered a sub-species of the Congro Grey (CAG). However, in 2011, the two races were officially separated based on genetic, morphological, plumage and vocal differences (Ref. research by Melo and O’Ryan – 2007).

One criteria for splitting up the two species was the fact that these two species don’t interbreed within their natural habitat. However, CAG / TAG hybrids have occurred in captivity (for example, Libby, a Congo-Timneh Hybrid African Grey Parrot – image published on www.griffinexotics.com/). Even though these crosses are VERY rare, they are said to be viable and fertile (able to produce young). These hybrids are smaller in size than the Congo African Grey with the darker grey plumage of the Timneh.

Those favoring the TAGs are suggesting that this species tends to be calmer and less nervous of new situations and people; and that they do better in family settings, while Congos prefer one-on-one relationships. I have seen exceptions to both rules. In any case – speaking personally – there hasn’t been an African Grey yet, that I haven’t fallen in love with.e

Overview of the TAG 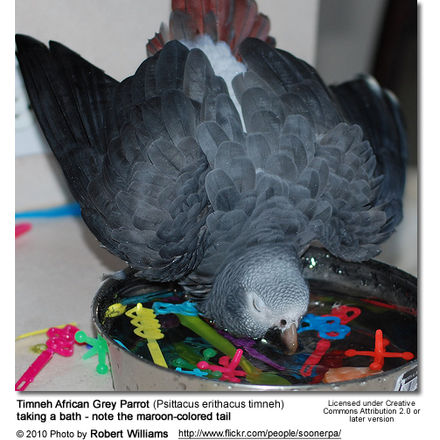 They equal the Congo’s in pet potential and “talking” ability. They are darker grey in color and have a maroon tail. We have found hand fed TAGs to be playful and affectionate. They need a “grey” sized parrot cage, lots of stimulating toys and an affectionate owner. They bond closely with their owners and delight in being part of the family. Our breeding TAG’s are on a pelleted diet with the addition of fresh fruits and veggies. (Source: Rand B Aviary – Breeder of African Greys and Parrot Connoisseur)

Timnehs look similar to the larger Congo greys, except for some distinctive differences; they are more slender, weighing in at 275-375 grams; length: 30 – 31 cm (12 – 12.4 ins). Their upper beak is bone-colored instead of black, and their feathering is much darker than a Congo’s. Their tail feathers are a deep lustrous maroon, as opposed to the Congo (CAGs)- who has a bright red tail. TAGs retain the white mask of their larger cousins, and many people find that their faces can be extremely expressive.

Immatures as adult, but have dark irides (= plural of iris).

Naturally occurs in the western Africa – mostly from Sierra Leone, Liberia, south to the western parts of the Ivory Coast (at least 70 km east of the Bandama River). Isolated populations exist in Guinea-Bissau and Guinea, east to southern parts of Mali. 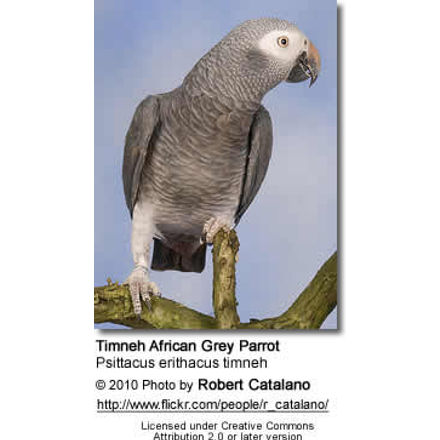 Relatively common, but their populations have decreased considerably in the last decade, mostly due to trapping for the pet trade as well as habitat destruction.

In pairs or small groups during day; gather towards dusk on tall palms or trees at forest edge, along rivers or lakes. Shy; usually not approachable; visits rivers and lakes during day to drink. Noisy and conspicuous during flight, but quiet when feeding.