The Toco Toucans (Ramphastos toco) are the largest and most recognized of all toucan species because of the bird’s iconic use in advertising.

Toco Toucans have the widest distribution of all toucans occurring in central and eastern South America, where they inhabit tropical areas and dry savannahs. Unlike other toucans, they typically don’t inhabit forests.

They are mostly resident, although local movements may occur in response to weather conditions and availability of food.

Over most of its range, the Toco Toucan is fairly common and is, therefore, considered to be of Least Concern.

Toco Toucans are found in: 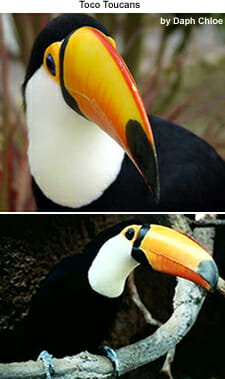 With an average length of 25 inches or 64 cm, the Toco Toucan is the largest of all toucans. The average Toco Toucan weighs 25 oz or 700 grams

It has a a striking plumage with a mainly black body, a white throat, chest and uppertail-coverts, and red undertail-coverts. It has a ring of blue skin around the eyes that is surrounded by another ring of bare, orange skin. It has a big yellow-orange bill with a black base and large spot on the tip.

Immature birds have a duller plumage and a shorter bill.

They resemble the smaller Keel-billed Toucans and Chestnut-mandibled Toucans, but these toucans can easily be differentiated by their varying bill patterns and body sizes.

Unlike the popular parrots, captive toucans cannot learn to talk. On the bright side, they are also much quieter. Generally, they are friendly and easily tamed.