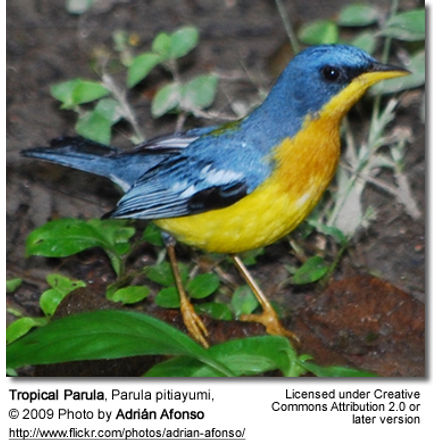 It breeds from southernmost Texas and northwest Mexico (Sonora) south through Central America to northern Argentina, including Trinidad and Tobago. This passerine is not migratory, but northern birds may make local movements. For example, although it does not breed in much of Pacific Cantral America, it is a regular vagrant to countries like El Salvador.

It is a species mainly of hill forests, and does not occur in the Amazon basin 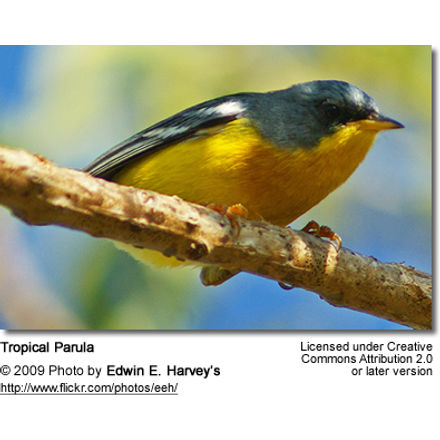 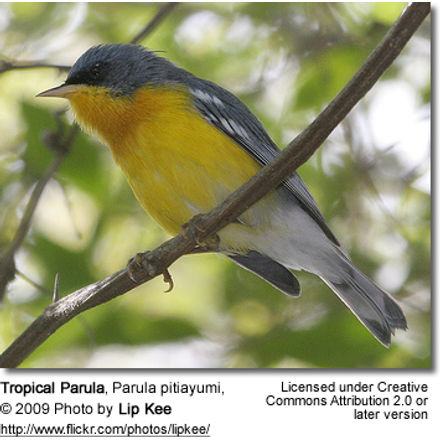 It is 11 cm long and has mainly blue-grey upperparts, with a greenish back patch and two white wingbars. The underparts are yellow, becoming orange on the breast. The male has a black patch from the bill to behind the eye.

Females are slightly duller than the males and lacks black on the head.

The immature Tropical Parula is dull plumaged, lacks the wing bars, and has a grey band on the breast.

The Tropical Parula has about 14 subspecies, with a wide range of plumage tones. Some (especially insular ones) are considered separate species by various authorities.

P. pitiayumi has occasionally been lumped with the closely related Northern Parula (P. americana) as a single species. Hybrids are routinely found in the Rio Grande Valley of southern Texas, though this may be a recent phenomenon. Most Tropical Parulas can be distinguished from the Northern Parula by their lack of white eye crescents, but this may be ambiguous in hybrids. One should also look for the distribution and extent of non-yellow coloration on the breast, and the extent of yellow on the malar (cheek) and belly.

In addition, a partially leucistic Tropical Parula female was seen in 2005, at Reserva Buenaventura in El Oro Province, Ecuador. With several small white areas on the forehead and around the eyes, this bird appeared much like a hybrid, but such birds would only occur as far south as Panama (if they would migrate like the Northern Parula).

The song is a high buzzy trill, and the call is a sharp tsit.

These birds feed on insects and spiders and occasionally berries.

It nests in clumps of epiphytes, especially Spanish moss, in a tree, laying usually two eggs in a scantily lined domed nest. Incubation is 12-14 days, mainly by the female.