The Tufted Coquette is uncommon within its wide range. They are mostly found in alone or in small groups, as they search for nectar and small insects to feed on.

The Tufted Coquette breeds in eastern Venezuela, Trinidad, Suriname, the Guianas, south to northern Brazil. It appears to be a local or seasonal migrant; however, little is known about its movements at this point in time.

Countries they occur in … 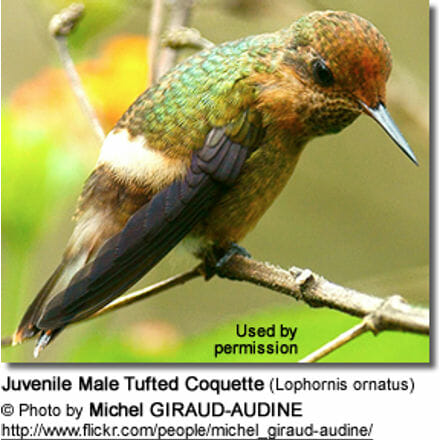 They are found in open country, at the edges of humid forests, and thickets, as well as in cultivated areas like gardens, plantations and savannas. 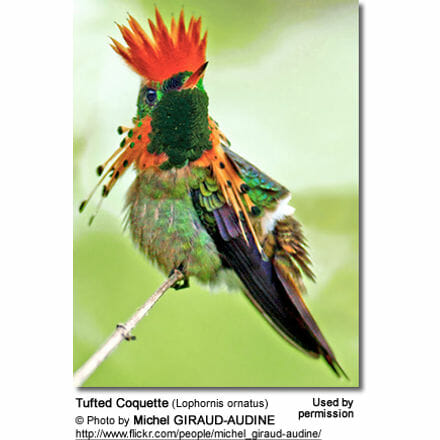 The Tufted Coquette is a very small hummingbird – only averaging 6.6 – 8 cm (2.6 – 3.1 inches) in length – including its tail and weighing around 2.3 g (0.08 ounces). It is so tiny that it can easily be confused with a large bee as it moves from flower to flower. Its red beak has a black tip and is short and straight..

The male has striking black-spotted rufous / orangey-colored feathers that project from the sides of his neck and a rufous / orangey head crest. His back is coppery green with a whitish rump band. His forehead and underplumage are green and the tail is a golden rufous.

The female doesn’t have the flashy crest and plumes of the male. She is green above, except for the whitish tail band. Her underplumage is rufous-colored, becoming much paler on the abdomen. Her tail is bronze green with a dusky band and whitish feather tips.

Juvenile males look like females, but the throat is whitish with fine dark spotting; they have a white rump, reddish forehead, and close to maturity, juvenile males show a hint of the future streamers on the neck. (Description of juvenile male provided by photographer Michel Giraud-Audine.)

Personality: Tufted Coquettes tend to be quite approachable 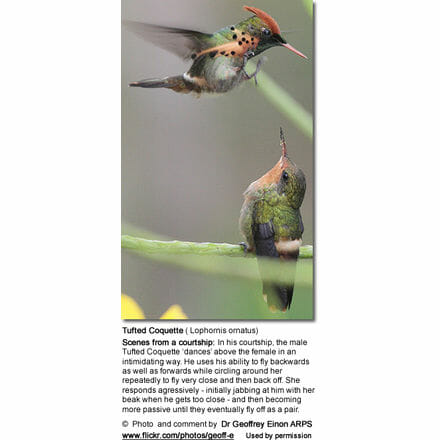 Males court females by flying in a u-shaped pattern in front of them. Their courtship behavior is well demonstrated by Dr. Einon’s images and comments to the right and below.

The male will separate from the female immediately after copulation. He does not participate in choosing the nest location, building the nest or raising the chicks

The female Tufted Coquette alone is responsible for building the cup-shaped nest out of plant fibers woven together and green moss on the outside for camouflage in a protected location in a shrub, bush or tree. She lines the nest with soft plant fibers, animal hair and feather down, and strengthens the structure with spider webbing and other sticky material, giving it an elastic quality to allow it to stretch to double its size as the chicks grow and need more room. The nest is typically found on a low, skinny horizontal perch.

The average clutch consists of one to three white eggs (usually two), which she incubates alone for 13 to 14 days, while the male defends his territory and the flowers he feeds on. The young are born blind, immobile and without any down.

As is the case with other hummingbird species, the chicks are brooded only the first week or two, and left alone even on cooler nights after about 12 days – probably due to the small nest size. The chicks leave the nest when they are about 19 to 20 days old. 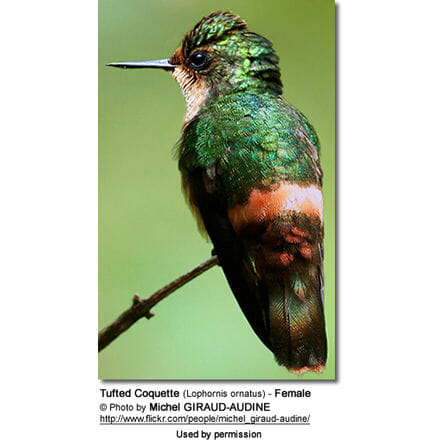 The Tufted Coquettes primarily feed on nectar taken from a variety of brightly colored, scented small flowers of trees, herbs, shrubs and epiphytes. They favor flowers with the highest sugar content (often red-colored and tubular-shaped) and seek out, and aggressively protect, those areas containing flowers with high energy nectar.

Tufted Coquettes are usually silent, but may give a quiet chik while feeding.