They were previously lumped together with the Black-crested or Black-capped Titmouse (the latter as a subspecies) and they reportedly hybridize in a narrow zone in central Texas , where their ranges overlap. Both species were referred to as “Tufted Titmice;” however, since 2002, they have been considered separate species.

The Tufted Titmice (as described on this page) are widespread across all of Eastern North America, and have grey crests and black foreheads.

The Black-crested Titmice are restricted to southern Texas, Oklahoma and east-central Mexico; and can readily be identified by their black crests and pale or buffy foreheads

The Tufted Titmice are commonly found across most of the United States east of the Great Plains – from central and eastern half of Texas, Oklahoma, Kansas, Nebraska, Iowa, Indiana, southern part of the lower peninsula of Michigan, Ohio, Pennsylvania, New York, New Hampshire and the southeastern tip of Maine south to southern Florida.

From the Great Lakes, the Tufted Titmice range north into southern Ontario in southeastern Canada.

The highest population densities occur along the Ohio, Cumberland, Arkansas and Mississippi rivers.

Historically, there were only known from the Ohio and Mississippi river drainages, but since the 1940s, the numbers of these birds have been increasing and they have been expanding their territories northwards – both phenomena are likely linked to the increased availability of winter food at backyard bird feeders.

These birds are permanent residents throughout their range, even in the northern areas with cold winters. In the early 1900s, most of them left in autumn to winter further south. This change in migration pattern is also likely associated with an increase of food offerings at bird feeders.

They inhabit deciduous and mixed woodland with dense canopy and tall vegetation, shrublands, wetlands / swamps and river basins, as well as wooded residential areas, such as city parks, gardens and orchards. They usually remain below an elevation of 2,000 feet (600 meters).

During the winter, they often travel and roost small mixed flocks, sometimes together with Carolina Chickadees.

Occasionally, many of them crowd inside of one cavity to a point of some of them suffocating. Before the breeding season, pairs separate from the winter flocks in preparation for nesting and raising their families. They have grey backs and tails, rusty-brown or peach-colored sides (flanks) and whitish / pale grey underparts.

The pointed crest is sometimes raised in excitement. Both the crest and the back of the head are silvery grey. The forehead is a darker grey with a black patch just above the bill; the face is white.

The small round bill and the large eyes are black. The legs and feet are light grey.

Resembles the Plain Titmouse but has rusty flanks and a black forehead (or crest).

They are smaller and their plumage is a paler brown.

Black-capped Chickadee or Carolina Chickadee: Slightly smaller in size. Have black and white heads without any crests. Tufted Titmice reach reproductive maturity when they are about one year old. Pairs are monogamous, remaining together until the death of one of the mates. Males are dominant over females. Pairs defend their breeding territories year-round.

Most breeding occurs during the warm months of the year, which is mostly from March to May. Males strengthen their bond with the females by feeding them. As part of the courtship display, the males adopt several postures that most favorably display their crests and orange flanks.

They may raise one or two broods a season; and the young of an earlier brood often assist in raising the second.

They nest in natural cavities in trees or fence posts; or in abandoned woodpecker nests about 3- 90 feet (~ 1 – 27 meters) from the ground. Or they  take advantage of hollow metal pipes or artificial nest boxes.

They line their nests with soft plant material, such as grasses, lichens, moss, leaves and bark, and other suitable nesting substrate, including shed snake skin, feather down and animal or human hair (sometimes plucked from live animals or humans near the nest). Nest boxes are reused in successive years.

Five to eight eggs are laid (the average being six), which are incubated by the female for about 13 – 17 days to hatching. The eggs are white or cream-colored with brownish / publish blotches. The nestlings are fed by both parents, and occasionally older siblings – and they are ready to leave the nest when they are about 17 to 18 days old.

The nestlings are fed by both parents and sometimes the young from previous clutches assist. They fledge (leave the nest) when they are about 17 to 18 days old. 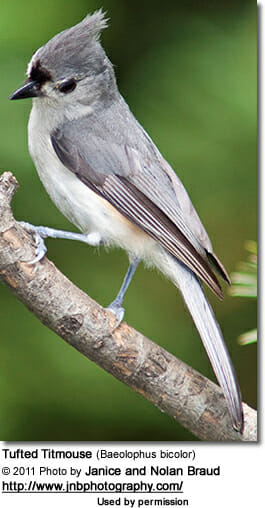 Tufted Titmice feed on a wide range of insect and invertebrate prey, including caterpillars, beetles, ants, wasps, bees, treehoppers, moths, flies, insect eggs, snails, and spiders; and therefore are valuable at keeping the populations of garden pests down and helping trees and plants by distributing their nuts and seeds that they carry away with them.

They will also eat seeds, fruits, berries and nuts. They are able to crack open nuts and seeds by holding them under their feet and hammering them with their bills.

Most foraging is done on trees as they search on trunks and limps for insects in the crevices of the bark. They will also wander around on the ground in their search of suitable food items. These active little birds will hop from branch to branch, hang upside down, or sometimes hover in flight to reach their prey.

They will also take advantage of bird feeders – even more so in the winter, when their favorite food item – insects – are hard to come by. They are most fond of sunflower seeds, but will also take other seeds, peanuts, suet and mealworms.

They will store excess food under bark or under objects on the ground for later retrieval and consumption. The average lifespan of Tufted Titmice is about 2.1 years. However, the oldest recorded bird lived 13.25 years.

Most birds don’t reach their maximum lifespan as most of them die as nestlings due to predation by birds of prey, such as Cooper’s Hawks, Sharp-shinned Hawks and owls; mammals, such as raccoons, opossums, squirrels, skunks and domestic rats; and reptiles, including snakes.

Those that make it to adulthood can expect to live more than 2 years.

They have various vocalizations with an overall “echoing” quality. Their songs are whistled, two-syllable Peeto-peeto-peeto or peter-peter-peter (depending on interpretation of sound) and day-day-day. They nasal calls include harsh scolds and high-pitched seeer or ti ti ti sii sii zhree zhree zhree. About 10 different calls are currently known. These calls are generally divided into two groups – low frequency which is usually associated with general communications and high frequency – typically used in association with aggressive behavior.