The Variable Oystercatcher (Haematopus unicolor) is a species of wader in the Haematopodidae family. It is endemic to New Zealand. The Maori name is torea-pango. They are also known as ‘red bills’.

“Variable” refers to the frontal plumage, which ranges from pied through mottled to all black. They are polymorphic meaning they have different genetic variants.

Blacker birds are more common in the south. All Stewart Island variable oystercatchers are black. The have pink legs, an orange eye ring and red beaks. They are often seen in pairs on the coast all around New Zealand.

Males are around 678 grams and females slightly larger at around 724 grams. Variables can be identified as they are slightly larger than the SIPO – SIPO are around 550 grams. Occasionally totally black but if they are pied (black and white) they can be easily confused with SIPO.

The variable species has less definition between the black and the white area, as well as a mottled band on the leading edges of the underwing. Variables also have a smaller white rump patch which is only a band across the base of the tail rather than a wide wedge shape reaching up to the middle of the back as in the SIPO. When mottled they are sometimes called ‘smudgies’.

The bird lives up to about 27 years.

They feed on mollusks, crabs and marine worms. After heavy rain, they sometime go inland in search of earthworms. They can open a shellfish by either hammering a hole in it or getting the bill between the two shells (of a bivalve) and twisting them apart.

They breed in North Island, South Island, Stewart Island, and Chatham Islands. They do not breed inland or beside rivers although the South Island Pied Oystercatcher (SIPO) does.

They nest on the shore between rocks or on sand dunes by making a scrape out of the sand or shingle, sometimes lined with some seaweed. When in flight they make a high pitched ‘kleep kleep’ sound They usually lay 2-3 eggs but they can lay up to 5. The eggs are typically stone colored with small brown patches all over. Eggs hatch in 25–32 days.

Chicks are well camouflaged by their colour and can fly in about 6 weeks. 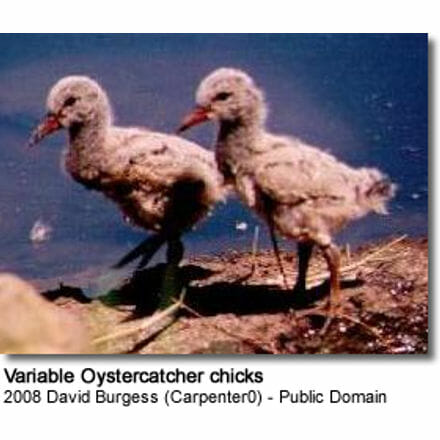