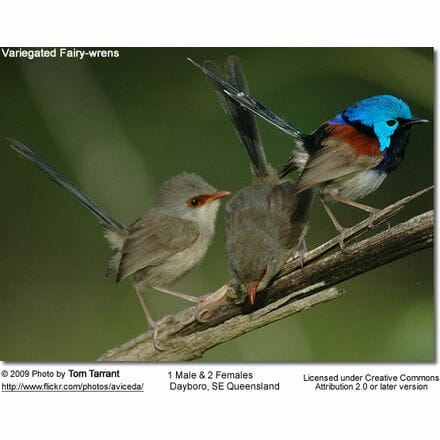 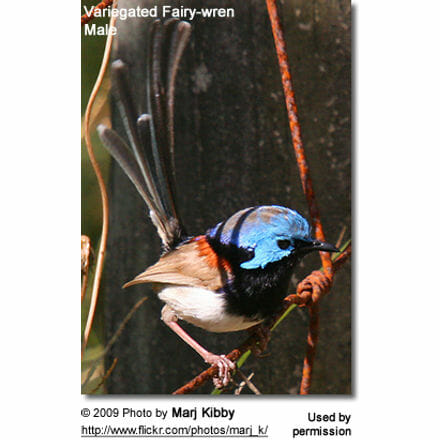 The Variegated Fairy-wren (Malurus lamberti) is a fairy-wren that lives in diverse habitats spread across most of Australia. Four subspecies are recognised.

Like other fairy-wrens, the Variegated Fairy-wren is a cooperative breeding species, with small groups of birds maintaining and defending small territories year-round. Groups consist of a socially monogamous pair with several helper birds who assist in raising the young. Male wrens pluck yellow petals and display them to females as part of a courtship display. 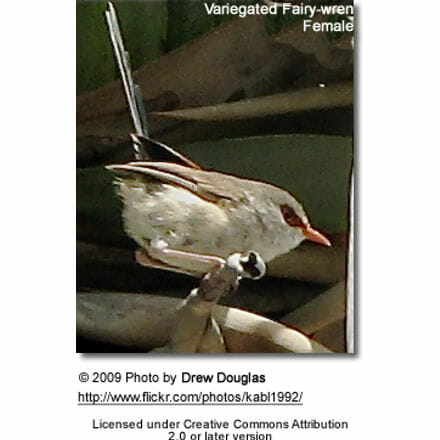 These birds are primarily insectivorous and forage and live in the shelter of scrubby vegetation across 90% of continental Australia, which is a wider range than that of any other fairy-wren.

The Variegated Fairy-wren was officially described by Nicholas Aylward Vigors and Thomas Horsfield in 1827, the Variegated Fairy-wren was initially considered to be a colour variant of the Superb Fairy-wren. The scientific name commemorates the British collector Aylmer Bourke Lambert. It is one of 12 species of the genus Malurus, commonly known as fairy-wrens, found in Australia and lowland New Guinea. Within the genus it belongs to a group of four very similar species known collectively as Chestnut-shouldered Fairy-wrens. The other three species are localised residents in restricted regions of Australia: the Lovely Fairy-wren (M. amabilis) of Cape York, the Red-winged Fairy-wren (M. elegans) of the southwest corner of Western Australia, and the Blue-breasted Fairy-wren (M. pulcherrimus) of southern Western Australia and the Eyre Peninsula.

Like other fairy-wrens, the Variegated Fairy-wren is unrelated to the true wrens. Initially fairy-wrens were thought to be a member of the old world flycatcher family Muscicapidae or warbler family Sylviidae, before being placed in the newly recognised Maluridae in 1975. More recently, DNA analysis has shown the family to be related to Meliphagidae (honeyeaters) and the Pardalotidae in a large superfamily Meliphagoidea.

Four subspecies are recognised; there are zones with intermediate forms between the ranges of each subspecies, contrasting with the well-defined borders between M. lamberti and the other chestnut-shouldered wrens. However, molecular analysis may shed more light on relationships and the current taxonomic treatment may change. The Purple-backed- and Lavender-flanked Fairy-wrens were considered distinct species in the past.

In his 1982 monograph, ornithologist Richard Schodde proposed a northern origin for the Chestnut-shouldered fairy-wren group due to the variety of forms in north and their absence in the southeast of the continent. Ancestral birds spread south and colonised the southwest during a warm wetter period around 2 million years ago at the end of the Pliocene or beginning of the Pleistocene. Subsequent cooler and drier conditions resulted in loss of habitat and fragmentation of populations. Southwestern birds gave rise to what is now the Red-winged Fairy-wren, while those in the northwest of the continent became the Variegated Fairy-wren and yet another isolated in the northeast became the Lovely Fairy-wren. Further warmer, humid conditions again allowed birds to spread southwards, this group occupying central southern Australia east to the Eyre Peninsula became the Blue-breasted Fairy-wren. Cooler climate after this resulted in this being isolated as well and evolving into a separate species. Finally, after the end of the last glacial period 12,000–13,000 years ago, the northern Variegated forms have again spread southwards, resulting in the Purple-backed subspecies assimilis. This has resulted in the Variegated Fairy-wren’s range to overlap with all three other species. Schodde also proposed that the blue-grey colored females of the Lavender-flanked subspecies were ancestral, while the browner coloration of females of southern forms was an adaptation to dry climates. Further molecular studies may result in this hypothesis being modified.

The Variegated Fairy-wren is 14–15 cm (5.5–6 in) long and weighs 6–11 g (0.21–0.38 oz). Like other fairy-wrens, it is notable for its marked sexual dimorphism (visual physical differences between the sexes), males adopting a highly visible breeding plumage of brilliant iridescent blue and chestnut contrasting with black and grey-brown. The brightly colored crown and ear tufts are prominently featured in breeding displays. The male in breeding plumage has striking bright blue ear coverts, with the crown often slightly darker, a black throat and nape, a royal blue upper back, chestnut shoulders and a bluish-grey tail. The wings are grey-brown and the belly creamy white. Non-breeding males, females and juveniles are predominantly grey-brown in colour; all males have a black bill and lores (eye-ring and bare skin between eyes and bill), while females have a red-brown bill and bright rufous lores. Immature males will develop black bills by six months of age and moult into breeding plumage the first breeding season after hatching, though this may be incomplete with residual brownish plumage and may take another year or two to perfect. Both sexes moult in autumn after breeding, with males assuming an eclipse non-breeding plumage. They will moult again into nuptial plumage in winter or spring. The blue colored plumage, particularly the ear-coverts, of the breeding males is highly iridescent due to the flattened and twisted surface of the barbules. The blue plumage also reflects ultraviolet light strongly, and so may be even more prominent to other fairy-wrens, whose colour vision extends into this part of the spectrum.

Vocal communication among Variegated Fairy-wrens is used primarily for communication between birds in a social group and for advertising and defending a territory. The basic song type is a high-pitched reel of a large number of short elements (10–20 per second); this lasts 1–4 seconds. The reel of the Variegated Fairy-wren is the softest of all malurids. Birds maintain contact with each other by tsst or seeee calls, while a short, sharp tsit serves as an alarm call.

Distributed over 90% of the Australian continent, the Variegated Fairy-wren is found in scrubland with plenty of vegetation providing dense cover.

It prefers rocky outcrops and patches of Acacia, Eremophila or Lignum (Muehlenbeckia) in inland and northern Australia. They have been reported to shelter in mammal burrows to avoid extreme heat. In urban situations such as suburban Sydney, these wrens have been said prefer areas with more cover than the related Superb Fairy-wren, though a 2007 survey in Sydney’s northern suburbs has proposed that Variegated Fairy-wrens may prefer areas of higher plant diversity rather than denser cover as such. Forestry plantations of pine (Pinus spp.) and eucalypts are generally unsuitable as they lack undergrowth. 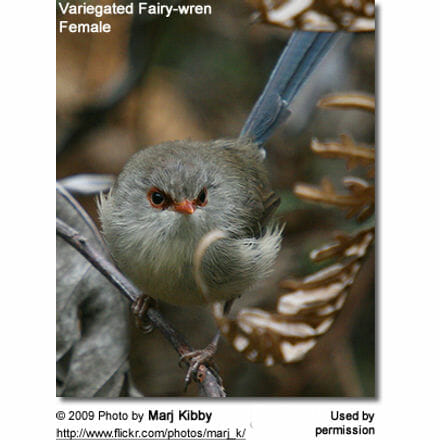 Like all fairy-wrens, the Variegated Fairy-wren is an active and restless feeder, particularly on open ground near shelter, but also through the lower foliage. Movement is a series of jaunty hops and bounces, its balance assisted by a proportionally large tail, which is usually held upright, and rarely still. The short, rounded wings provide good initial lift and are useful for short flights, though not for extended jaunts. During spring and summer, birds are active in bursts through the day and accompany their foraging with song. Insects are numerous and easy to catch, which allows the birds to rest between forays. The group often shelters and rests together during the heat of the day. Food is harder to find during winter and they are required to spend the day foraging continuously.

Like other fairy-wrens, male Variegated Fairy-wrens have been observed carrying brightly colored petals to display to females as part of a courtship ritual. In this species, the petals that have been recorded have been yellow. Petals are displayed and presented to a female in the male fairy-wren’s own or another territory.

The Variegated Fairy-wren is a cooperative breeding species, with pairs or small groups of birds maintaining and defending small territories year-round. Though less studied than the Superb- and Splendid Fairy-wrens, it is presumably socially monogamous and sexually promiscuous, with each partner mating with other individuals.] Females and males feed young equally, while helper birds assist in defending the territory and feeding and rearing the young. Birds in a group roost side-by-side in dense cover as well as engage in mutual preening. Occasionally larger groups of around 10 birds have been recorded, though it is unclear whether this was incidental or a defined flock.

Major nest predators include Australian Magpies (Gymnorhina tibicen), butcherbirds (Cracticus spp.), Laughing Kookaburra (Dacelo novaeguineae), currawongs (Strepera spp.), crows and ravens (Corvus spp.), and shrike-thrushes (Colluricincla spp.), as well as introduced mammals such as the Red Fox (Vulpes vulpes), feral cats and Black Rat (Rattus rattus). The Variegated Fairy-wren readily adopts a ‘Rodent-run’ display to distract predators from nests with young birds. The head, neck and tail are lowered, the wings are held out and the feathers are fluffed as the bird runs rapidly and voices a continuous alarm call. 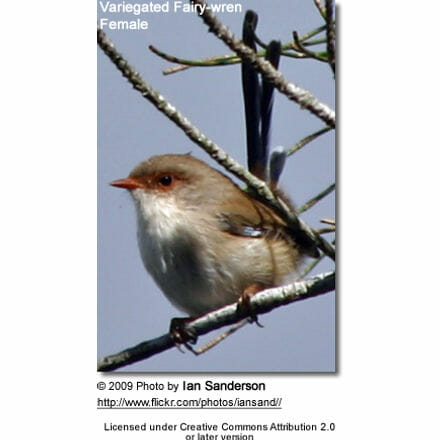 The Variegated Fairy-wren consumes a wide range of small creatures, mostly insects, including ants, grasshoppers, bugs, flies, weevils and various larvae. Unlike the more ground-foraging Superb Fairy-wrens, they mostly forage deep inside shrubby vegetation, which is less than 2 m (7 ft) above the ground.

Breeding occurs from spring through to late summer; the nest is generally situated in thick vegetation and less than 1 m (3 ft) above the ground. It is a round or domed structure made of loosely woven grasses and spider webs, with an entrance in one side. Two or more broods may be laid in an extended breeding season. A clutch consists of three or four matte white eggs with reddish-brown splotches and spots, measuring 12 x 16 mm (.45 x .6 in). The female incubates the eggs for 14 to 16 days, after which newly hatched nestlings are fed and their fecal sacs removed by all group members for 10–12 days, by which time they are fledged. Parents and helper birds will feed them for around one month. Young birds often remain in the family group as helpers for a year or more before moving to another group, though some move on and breed in the first year. Variegated Fairy-wrens commonly play host to the brood parasite Horsfield’s Bronze-Cuckoo (Chrysococcyx basalis) and, less commonly, the Brush Cuckoo (Cacomantis variolosus) and Fan-tailed Cuckoo (C. flabelliformis).