The Violet-crowned Hummingbird is mostly known to be a mountain species that is common in Mexico, but is rare and localized in southeastern Arizona, southwestern New Mexico and western Texas in the United States. Some movements east have been recorded.

The Violet-crowned Hummingbirds are generally found in scrubby open woods, water canyons, along river borders and in partial clearings.

In Mexico, its range extends down the Pacific slope from Sonora through Jalisco to northwestern Oaxaca and in the interior Madrean Highlands from western Chihuahua south through Durango to Oaxaca. In Mexico, they inhabit arid to semiarid scrub, thorn forests, riparian and oak woodlands, as well as parks and gardens.

In the US, their northern (breeding) range includes the arid scrub of southeastern Arizona to southwestern Mexico; outside the breeding season, they may wander to southernmost California and southwest Texas – and in recent years records even exist of them as far east as Virginia (United States eastern coast).

In southeastern Arizona and southwestern New Mexico, they occur in the Madrean Sky Islands – enclaves of Madrean pine-oak woodlands found at higher elevations.

In Texas, they can be found in the extreme west,on the Edward’s Plateau, in south Texas and occasionally along the coast.

Some authorities consider this species essentially resident throughout most of its range with local movements; while others list it as being migratory; however, there are numerous records of them both breeding and overwintering in Arizona and other areas.

It seems appropriate to describe this species as a “wanderer” that is currently expanding its range north and eastward.

This medium-sized, long-bodied hummingbird is about is 4 inches or 10 cm long.

It is most easily identified by its white under plumage and iridescent bluish-violet crown (from where it gets its name). The back is emerald green. The tail is dark brown / olive green.

The straight and very slender bill is reddish / orangey with a black tip.

Adult females and juveniles resemble the adult male, but the plumage is generally less colorful than that of the male and they have a lighter and greener crown.

Their calls are described as loud chatters. 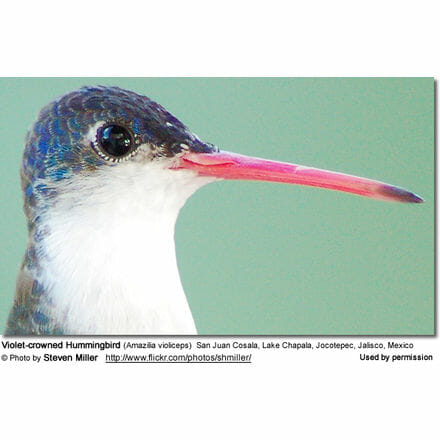 In southeastern Arizona and southwestern New Mexico, the Violet-crowned Hummingbirds almost exclusively nests in the Arizona sycamore tree (Platanus wrightii), which – in the United States – is limited to narrow strips of land that border creeks.

The Violet-crowned Hummingbirds primarily feed on nectar taken from a variety of brightly colored, scented small flowers of trees, herbs, shrubs and epiphytes. They favor flowers with the highest sugar content (often red-colored and tubular-shaped) and seek out, and aggressively protect, those areas containing flowers with high energy nectar.

In winter, when flowering plants are not readily available, these hummingbirds may drink the sap from holes created by sapsuckers, as a substitute for nectar. They may also visit local hummingbird feeders to retrieve sugar water. They drink out of bird baths or water fountains where they will either hover and sip water as it runs over the edge; or they will perch on the edge and drink – just like all the other birds; except the hummingbirds only remain still for short moments.

They also take some small spiders and insects – important sources of protein particularly needed during the breeding season to ensure the proper development of their offspring. Insects are often caught in flight (hawking); snatched off leaves or branches, or are taken from spider webs. A nesting female can capture up to 2,000 insects a day.