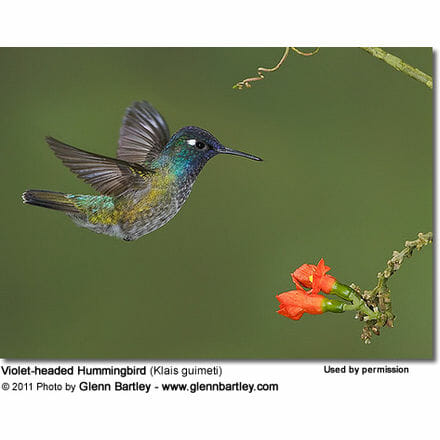 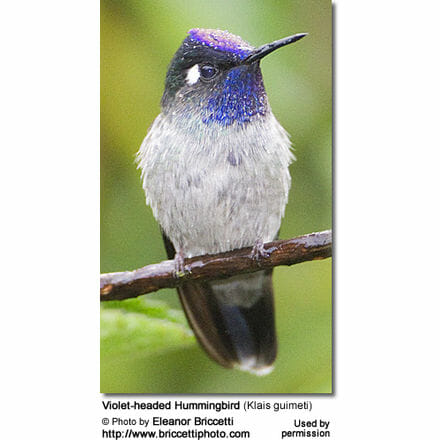 The Violet-headed Hummingbird (Klais guimeti) is a hummingbird with a natural range from Central America well into South America.

In Central America, the Violet-headed Hummingbirds are found in Honduras, Nicaragua, Costa Rica and Panama.

The Violet-Headed Hummingbirds are found in the mountains and have been recorded at altitudes from 200 to 850 meters in Costa Rica, from 400 to 1850 meters in Colombia; and 150 to 1900 meters in Venezuela..

The Violet-headed Hummingbird averages 8.1 cm in length, including its tail. It has a short, straight beak that is about 13 mm long.

The male Violet-headed Hummingbird’s head and throat are bright violet or blue (depending on the angle viewed) with white spots behind each eye that contrast with the dark head. The upper plumage is a metallic bluish-green (or bronze-green depending on the angle), while the chest is green fading to a grey abdomen, and the wings are black. His tail is green with tiny white-grey spots.

The female Violet-headed Hummingbird’s plumage is generally duller. Her back is green. Her throat, chest and abdomen are grey. She has a blue cap and white spots behind the eyes. The wings and tail look like the male’s. 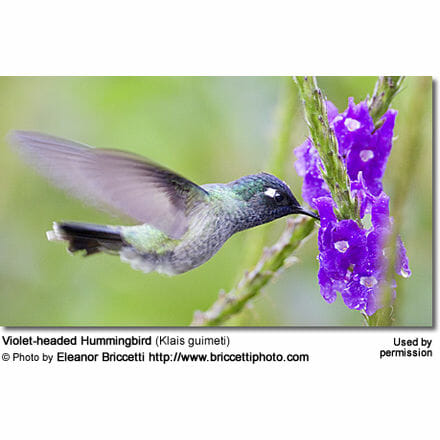 The breeding season usually starts in December with the males commencing their courtship dances to attract females. Male Violet-headed Hummingbirds sing in loose leks (= gathering for the purposes of competitive mating displays), usually beginning in October and intensifying in December. These leks usually take place 5 to 18 meters above the ground on the edge of clearings. At times, a single male may sing solo without other Violet-Headed Hummingbirds nearby.

The nesting period generally begins in February, although sometimes as early as January depending on weather conditions – and the young typically fledge in May, which presents the end of the breeding season.

The female Violet-headed Hummingbird is responsible for building the cup-shaped nest out of plant fibers woven together and green moss on the outside for camouflage in a protected location in a shrub, bush or tree. She lines the nest with soft plant fibers, animal hair and feather down, and strengthens the structure with spider webbing and other sticky material, giving it an elastic quality to allow it to stretch to double its size as the chicks grow and need more room. The nest is typically found on a low, skinny horizontal perch about 1 to 5 meters above forested mountain streams.

The chicks are brooded only the first week or two, and left alone even on cooler nights after about 12 days – probably due to the small nest size. The chicks leave the nest when they are about 20 days old.