The Waved Albatross, Phoebastria irrorata – also known as Galapagos Albatross – is the only member of the Diomedeidae family located in the tropics. When they forage, the Waved Albatross follow straight paths to a single site off the coast of Peru, about 1,000 km (620 mi) distant to the east. During the non-breeding season, these birds reside primarily in the areas of the Ecuador and Peruvian coasts.

They are distinctive for their yellowish-cream neck and head, which contrasts with their mostly brownish bodies. Even more distinctive is the very long, bright yellow bill; which looks disproportionately large in comparison to the relatively small head and long, slender neck.

They also have chestnut brown upper parts and underparts, except for the breast, with fine barring, a little coarser on the rump. They have brown upper-wings, back, and tail, along with a whitish breast and underwings. Their axillaries (feathers under the wing – the “armpit” or “wingpit” of a bird) are brown. Finally they have blue feet.

Juveniles are similar to adults except for more white on their head. Chicks have brown fluffy feathers.

The lifespan of this species may reach 40 to 45 years. 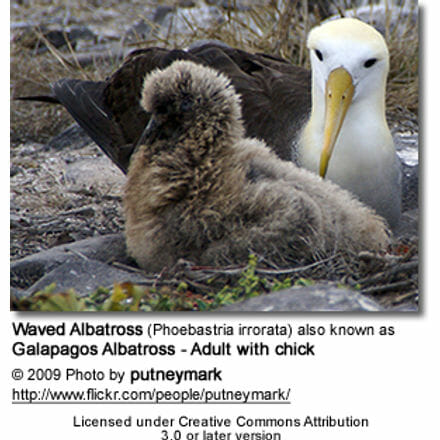 The Waved Albatross breeds primarily on Española Island in the Galápagos archipelago; however there have been sightings of non-breeders and therefore possible small amounts, around 10 to 20, of breeders on Genovesa Island and Isla de la Plata. During non-breeding season they will shift to the east and southeast to the continental shelf region off the coast of Peru and Ecuador.

The primary food sources of the Waved Albatross are fish, squid, and crustaceans. But they have also been observed to scavenge for other food sources, including the regurgitated food of other birds. When foraging the Waved Albatross finds points in the ocean where prey will be more surfaced, this is the most effective way for the waved albatross to get its food. Waved Albatrosses will forage 10–100 km (6.2–62 mi) away from the place where their chicks are nesting to get food for them. 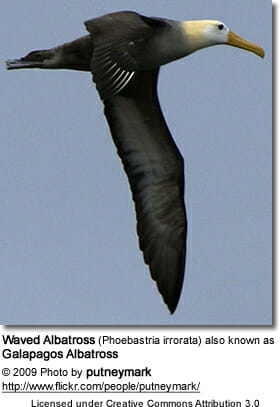 The nests are built on areas of lava with boulders and sparse vegetation, or thick brush. The courtship of the Waved Albatross is a very elusive and spectacular sight to see, it includes: rapid bill circling and bowing, beak clacking, and an upraised bill to make a whoo hoo sound.

The eggs are laid between April and June and incubated for two months after that. When the eggs hatch, the chicks stay together in small nurseries while the parents go out to the sea for hunting.

When the parents return, they may feed the chicks up to 2 kg (4.4 lb) of oil. The young reach adult size by December and leave the colony by January. The partners remain mates until one of the partners dies.

Waved Albatross are spectacular flyers perhaps even the most famous. They can fly for hours without stalling and they do this by dynamic soaring. The wind speed near the surface of the sea is much slower than about 50 ft (15 m) in the air. The waved albatross uses this to its advantage by gliding at speed into the wind. As the Waved Albatross glides higher it loses most of its ground speed because it is gliding into a wind of a higher speed.

However, though they lose their ground speed because they are gliding into a wind of a higher speed their air speed does not fall, enabling them to glide continuously. Waved Albatrosses do however have difficulty taking off and landing due to their huge wings and slender bodies.

To make it easier they take off on cliffs that are more inland and not next to the coast. The problem is when they come into land they have a high stalling speed, and when they take off its hard to beat their massive wings.

The population of Waved Albatrosses on the Galápagos is protected by national park personnel, and the island is also categorized as a World Heritage Site.

But limited range, bycatch by long-line fishing, disturbance via tourism, disease, and the effects of illegal fishing in the nearby waters place them in considerable jeopardy. Especially long-line fishing seems to be making a severe impact on the species, which was uplisted to Vulnerable from Near Threatened by the IUCN in 2000. Despite some 34,700 adult birds still occurring in 2001, their numbers have apparently started to decrease at an unknown rate more recently, probably due to longline fishing which also upsets the sex ratio (males being killed more frequently).

As the current situation makes the population highly vulnerable to a catastrophic collapse to extinction, it was uplisted to Critically Endangered status in the 2007 IUCN Red List. 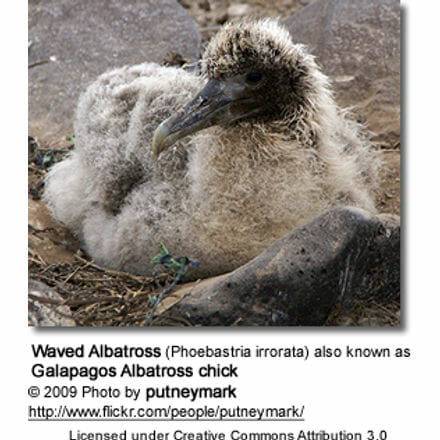 Waved Albatrosses are a type of Albatross that belong to Diomedeidae family and come from the Procellariiformes order, along with Shearwaters, Fulmars, Storm-petrels and Diving-petrels.

The Waved Albatross derives its name from the wave-like pattern of their feathers on the adult birds.