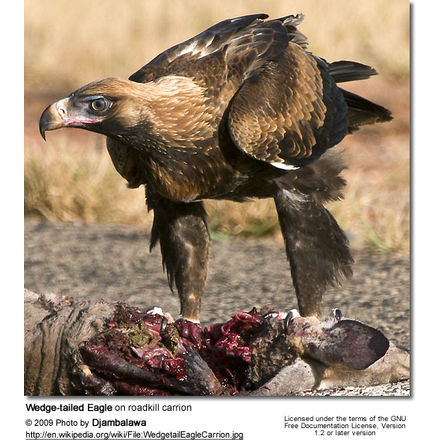 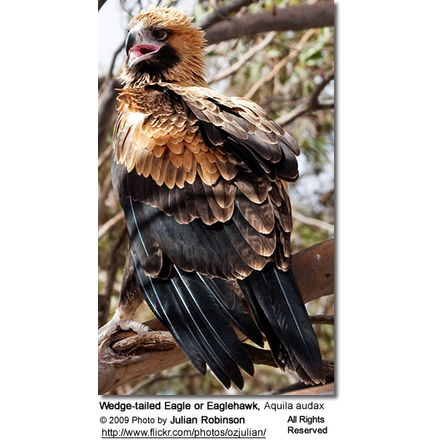 The Wedge-tailed Eagle or Eaglehawk (Aquila audax) is the largest raptor in Australia and is the most common of all the world’s large eagles.

It has long, fairly broad wings, fully feathered legs, and an unmistakable wedge-shaped tail. Because of both its tail and its size — it is one of the largest birds of prey in the world — it can be identified at a glance as a “Wedgie” even by the non-expert.

The Wedge-tailed Eagle is one of twelve species of large predominantly dark-colored eagles in the genus Aquila found worldwide; a large brown bird of prey, it has a wingspan averaging over 2.5 m (8.3 ft) and an average length of around 1.2 m (4 ft).

Young Eagles are a mid-brown colour with slightly lighter and reddish-brown wings and head. As they grow older, their colour becomes darker, reaching a dark blackish-brown shade after about ten years. Adult females tend to be slightly paler than males.

Although it rarely needs to be distinguished from other Aquila eagles, its long, wedge-shaped tail is unique to this species.

Wedge-tails are found throughout Australia, including Tasmania, and southern New Guinea in almost all habitats, though they tend to be more common in lightly timbered and open country in southern and eastern Australia. 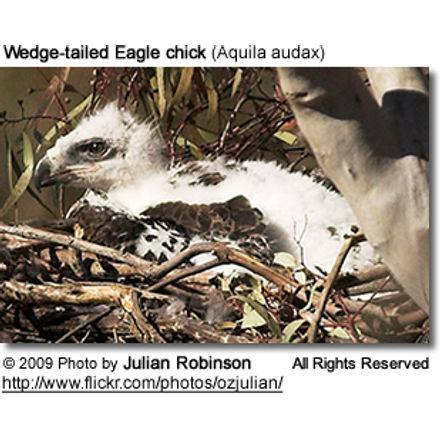 As the breeding season approaches, pair of Wedge-tailed Eagle perch close to each other and preen each other.

They also perform dramatic aerobatic display flights together over their territory. Sometimes the male dives down at breakneck speed towards his partner. As he pulls out of his dive and rises just above her on outstreched wings, she either ignores him or turns over to fly upside down, stretching out her talons. The pair may then perform a loop-the-loop.

The wedge-tailed eagle usually nests in the fork of a tree between one and thirty meters above the ground, but if there are no suitable sites, it will nest on a cliff edge.

Both birds build the large stick nest, or add new sticks and leaf lining to an old nest. The female usually lays two eggs, and they are incubated by both sexes. After about 45 days, the chicks hatch. At first, the male does all the hunting. When the chicks are about 30 days old, the female stops brooding them and joins her mate to hunt for food.

The young Wedge-tailed Eagles depend on their parents for food for up to six months after hatching. They leave only when the next breeding season approaches. 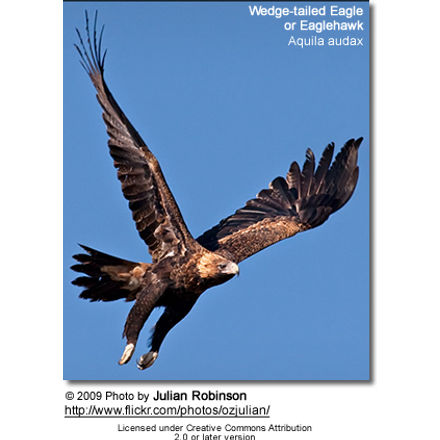 They are highly aerial, soaring for hours on end without wingbeat or effort, regularly reaching 6000 feet (1800 m) and sometimes considerably higher. The purpose of this very high flight is unknown.

Their keen eyesight extends into the infrared and ultraviolet bands. This helps them spot prey and allows them to see rising thermals, which they can use to gain altitude while expending little energy.

Most prey is captured on the ground in gliding attacks or (less frequently) in the air. Choice of prey is very much a matter of convenience and opportunity: since the arrival of Europeans, the introduced rabbit and Brown Hare have become the primary items of the eagle’s diet in many areas.

The Wedge-tails can eat almost anything of a suitable size, live-caught or as carrion.

They display considerable adaptability, and have sometimes been known to team up to hunt animals as large as the Red Kangaroo; to cause goats to fall off steep hillsides and injure themselves; or to drive flocks of sheep or kangaroos to isolate a weaker animal. Wedge-tailed Eagles may also kill young calves.

Carrion is a major diet item also: Wedge-tails can spot the activity of Australian Ravens (sometimes known as crows) around a carcass from a great distance, and glide down to appropriate it. Wedge-tailed Eagles are often seen by the roadside in rural Australia, feeding on animals that have been killed in collisions with vehicles.

This impressive bird of prey spends much of the day perching in trees or on rocks or similar exposed lookout sites such as cliffs from which it has a good view of its surroundings. Now and then, it takes off from its perch to fly low over its territory. During the intense heat of the middle part of the day, it often soars high in the air, circling up on the thermal air currents that drift up from the baking ground below. Each pair occupies a home range, which may extend as little as 9 square kilometres to more than 100 square kilometres. Within this home range lies a breeding territory around the nest. The eagle patrols the boundary of this home range and advertises its ownership with high-altitude soaring and gliding flights. It may defend its territory by diving on intruders. 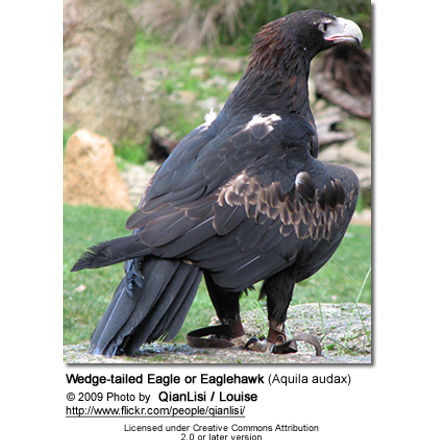 The Tasmanian subspecies (Aquila audax fleayi) is listed as endangered by the Environment Protection and Biodiversity Conservation Act 1999 (EPBC Act) with fewer than 200 pairs left in the wild.

Like the Thylacine, the eagle was once subject to a bounty in Tasmania, as it was believed to prey on livestock.

On episode 4 of season 2 of Quite Interesting, Jeremy Clarkson describes wedge-tailed eagles as gorging on roadkill at night, then occasionally being hit by trucks themselves, in gory detail.

The Empire of Atlantium, a micronation based in New South Wales, Australia, features the wedge-tailed eagle on its seal. 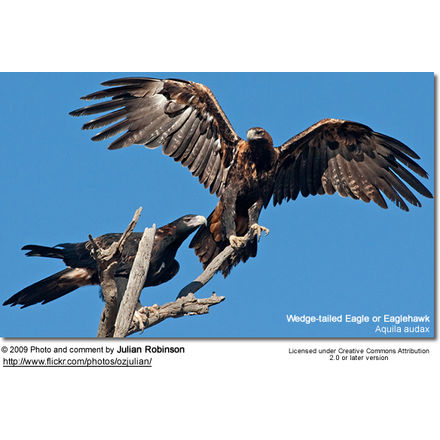