The Western Screech Owls (Megascops kennicottii) are small owls that are found in western United States, Canada and Mexico. They are relatively common and resident (non-migratory) throughout their large range.

They were previously considered conspecific (one and the same species) with the Eastern Screech Owl.

These nocturnal birds become active after sunset and silently hunt their prey at night. They occur in red, grey and intermediate phases; with grey being the most common.

These birds are also locally known by myriad names that were derived from their loud and occasional screeching calls, their physical description or mystical associations (superstitions).

These local names include: 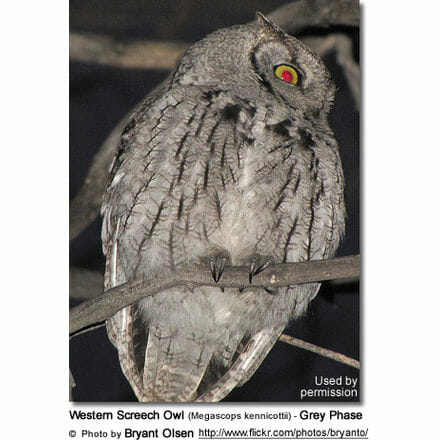 These birds are found in western North America ranging as far north as southern Canada and southeastern Alaska south through the coastal regions of the Pacific Northwest to the Baja penninsula and into Mexico.

In the United States, their range has expanded in the last decades to go as far as eastern Colorado and Texas, where their range now overlap with its close relative – the Eastern Screech Owl.

They are typically found in red cedar, hemlock and Douglas fir forests, as well as inhabiting Sitka spruce forests. They generally remain near bodies of water and riparian woodlands. They are also commonly found in residential areas, orchards, parks and cemeteries with shade trees.

During the day, these owls roost in natural cavities of large dead or living trees, in buildings or in the dense scrubby brush or foliage. 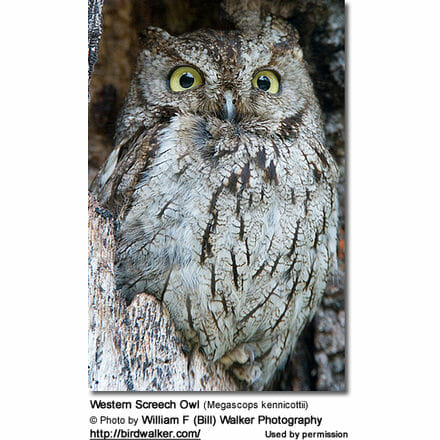 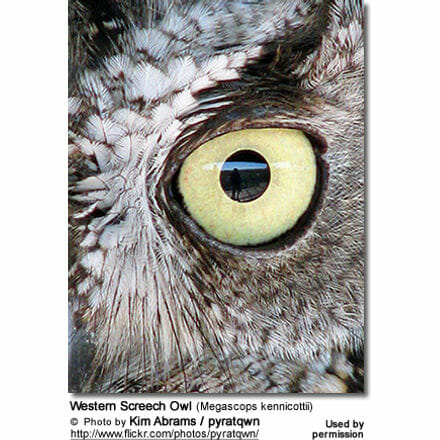 The head is large and round, with prominent, wide-set ear (feather) tufts. The eyes range in color from greyish-yellow to bright yellow. The bill ranges from greyish-yellowish / bone color to greyish-green at the tips with tufts of bristly feathers around the base.

There are two color morphs: a grey phase and a reddish-brown phase. The two color variants will mate together producing offspring with a brownish grey plumage. The plumage below is whitish patterned with streaks, offering them a perfect camouflage against the tree bark.

The adults in both color phases have vertical streaking on the chest and abdomen (horizontal in the juveniles).

The reddish-brown variant is more common in the southern part of its range. The vast majority of the Pacific populations (up to 7%) are reddish-brown and the rest are grey. 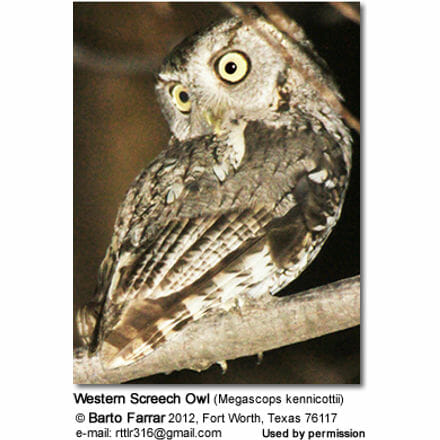 Juveniles of both color phases can be identified by the horizontal streaking on the chest / abdomen (vertical in the adult). Many feathers are tipped with white.

Juveniles have paler bills – compared to the bills of the adults which are darker, except for lighter tips. Otherwise, juveniles resemble the adults. 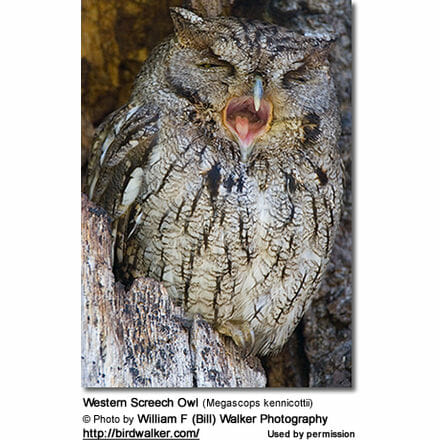 They eat various larger insects, such as beetles, moths, crickets, grasshoppers and cicadas, which makes up more than half of their diet. They will also hunt small mammals, such as rodents, bats, shrews up to the size of rabbits; and birds ranging from chickadees, sparrows, warblers up to the size of a Ruffed Grouse (which are heavier than the screech owls).

They are active at night or near dusk. Most hunting occurs during the first hours of darkness. Because of their excellent hearing and night vision they are able to locate prey in darkness.

They usually watch from a perch and swoop down when prey is detected and capture their prey with their well-developed raptorial claws (talons).

They are also able to catch insects or small birds in flight.

During the winter, these owls have been observed hunting for fish at fishing holes or cracks in ice at bodies of water. 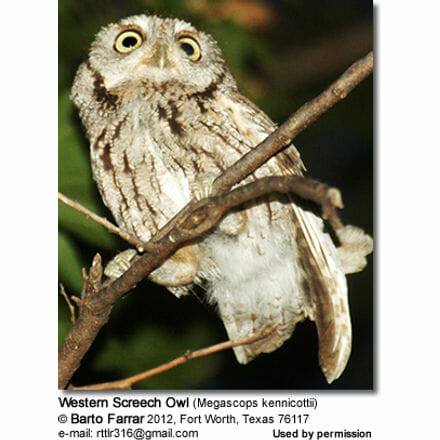 The breeding season usually starts in mid-April – although may commence as early as mid-March – and stretches to mid- May.

Their elaborate courtship ritual involves males approaching females, calling from different branches until they are close. At this point the males bobs and swivels his head, and then bobs his entire body. Should the female ignore his efforts, intensifies his bobbing and swiveling. She will show her receptiveness by moving closer to him until their bills touch and they start preening each other.

The average clutch consists of 3 – 4 eggs. The female does most of the incubation (brooding of the eggs) which lasts about 26 days to hatching. The male is responsible for feeding the nesting female.

Once the young hatched, the female will tear food up into smaller sizes to feed to the young. Due to nest predation, only one young is likely to survive to fledging, which occurs about 31 days after hatching.

Notwithstanding name, these owls rarely screech; their calls instead are generally a series of short whistles “hoo-hoo-hoo….”at an increasing tempo or a short then long trill while maintaining a constant pitch.

During the day, these owls are rarely seen due to their nocturnal habitats – however, their haunting calls are often indicative of their presence.