The Western Bluebirds or Mexican Bluebirds (Sialia mexicana mexicana) occur naturally in Northern America. During the breeding season, these bluebirds are typically seen in pairs or small family groups. 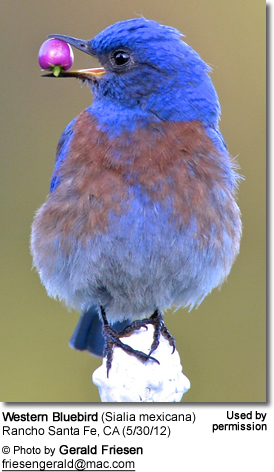 During the breeding season, these bluebirds are typically seen in pairs or small family groups; however, for the rest of the year, these social birds often join large mixed feeding flocks with 100 birds or more. These flocks may include the related Mountain Bluebirds (with which they are known to hybridize), American Robins and Yellow-rumped Warblers, and other birds with similar feeding habits.

When temperatures drop, these birds often use communal roost cavities, such as bird roost boxes, where groups of birds share the same space in order to keep warm.

During the day, these birds are most commonly seen perching on fence posts, signs or prominent limps as the scan the ground for insect prey.

Nesting Western Bluebirds maintain breeding and feeding territories, and will aggressively defend those. In flight, they may grab the opponent’s legs, and the two birds will tumble to the ground where the fight continues. Males have been seen pinning intruding birds on the ground and jabbing them with their bills. 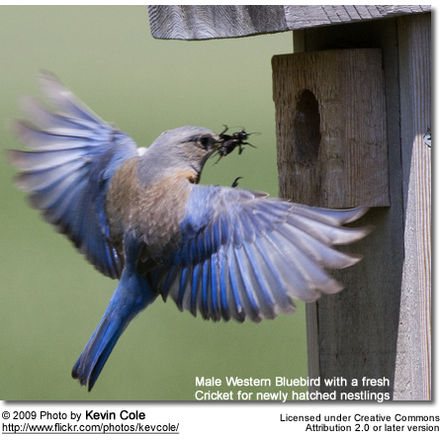 Western Bluebirds are found in parts of western North America, with a range that stretches from southeastern British Columbia and Alberta in Canada, south into the United States, where they occur in Washington, Idaho, western and south-central Montana, Nevada, Utah, Colorado, west Texas, New Mexico, Arizona and California. They range south into northern Baja California and into central Mexican states of Michoacan, Puebla and central Veracruz.

Northern populations migrate south for the winter and those found in southern parts of the range are often resident (non-migratory), except for some seasonal altitudinal movements.

Migrating birds are thought to follow their regular foraging routes. 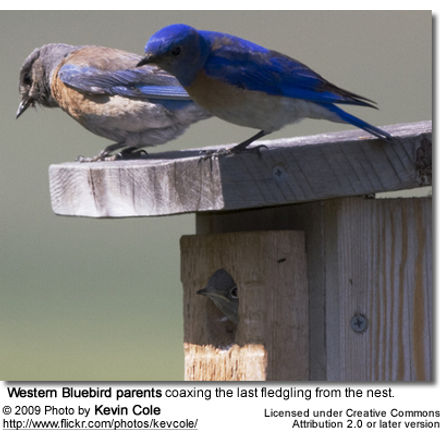 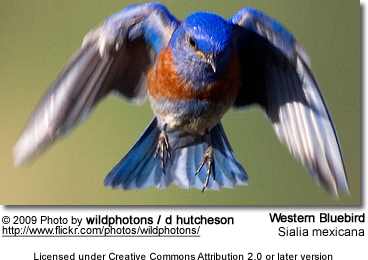 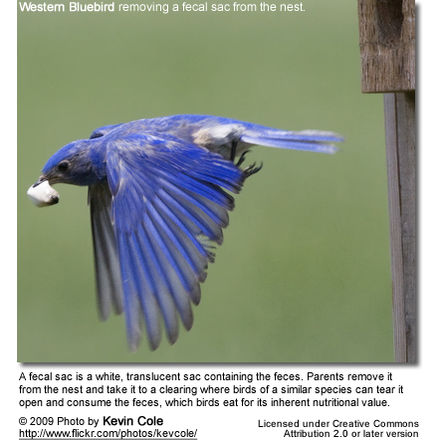 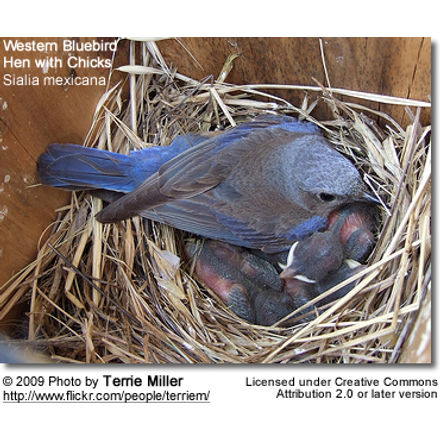 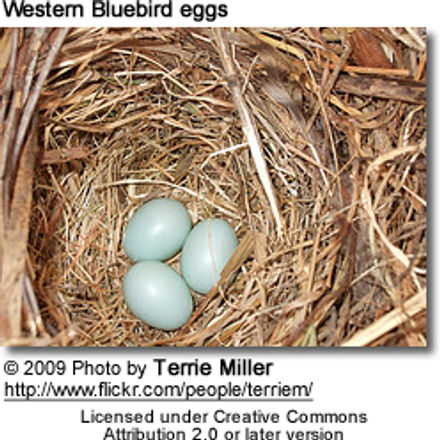 Most breeding occurs between May to July.

Western Bluebirds are monogamous, although instances of extra-pair copulation are regularly reported. In fact, according to genetic studies, as much as 45 percent of all nests contain one or more chicks that are not the resident males’ offspring.

They are also co-operative breeders, which means that birds other than the parents help raise the young. These are often referred to as “nest helpers.” These can be the independent young from prior clutches, adult pairs, or often other unmated adult males. There have also been reports of birds of different species helping them. For example, Violet-green Swallows have been seen feeding the young and defending the nests of Western Bluebirds.

On the onset of the breeding season, the male will perform a courtship display that include exaggerated flights and offering food to potential females.

Once a pair bond has been made, the pair will search for a nest site together.

These cavity nesters will inspect holes in trees, which often are abandoned woodpecker nests. They will also nest in dirt banks and hollow fence posts. In some instances, they have made their nests in mail boxes or in protected areas in buildings / structures. If available, they may also take advantage of artificial bird houses.

Once a suitable site has been identified, both the male and the female will construct a nest using grasses, weeds, roots, twigs, pine needles and other material found in their environment.

The female alone incubates the eggs for 12 – 18 days (most often 14). The male guards the nest and takes food to the brooding female. The pink hatchlings are only covered with a sparse grey down. They are blind and helpless. Both parents raise the chicks. The young fledge when they are about 18 to 25 days old, but their parents continue to feed them for up 30 days after hatching.

As soon as the first brood has fledged, the female will typically start on the next clutch. She may produce up to three broods in a year if conditions are favorable.

The oldest known Western Bluebird was 8 years and 8 months old. However, most birds don’t make it through the first year due to harsh environmental conditions during the nesting period to some extent, but primarily they fall victim to predators, such as cats, chipmunks, squirrels, deer mice, raccoons, and larger birds.

They reach reproductive age when they are about one year old. 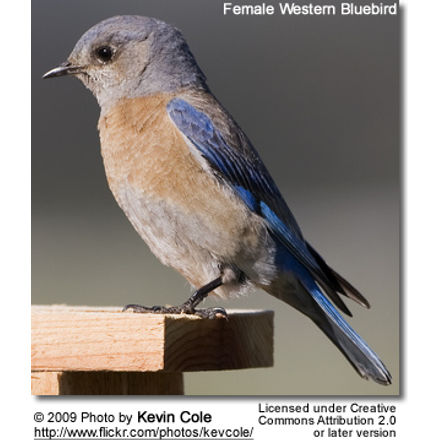 Even though Western Bluebirds are still numerous at this time, population declines have been noted in some areas, specifically in Oregon, Utah, Washington, California, New Mexico (USA) and British Columbia (Canada). Western Bluebirds are protected under the US Migratory Bird Treaty Act. The declines throughout much of their territory are caused by a combination of the below …

Artificial Bluebird Nesting Boxes: Bluebird trails were successfully organized during which lines of bluebird houses were put up, monitored and maintained by conservation groups as well as by concerned citizens.

It was found that Western Bluebirds more successfully raised chicks in nest boxes than in natural cavities. Breeding pairs are able to start nesting earlier and the predation rates on the eggs and chicks is generally lower; hence resulting in more young surviving to fledging. 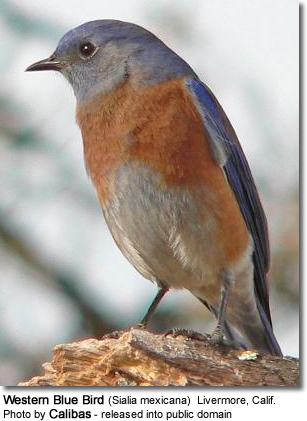 Please Note: The articles or images on this page are the sole property of the authors or photographers. Please contact them directly with respect to any copyright or licensing questions.