These blue-and-grey plumaged birds are sometimes referred to as “Blue Jays” resulting in confusion with the true Blue Jays, which belong to a different family.

The food-caching behavior of these intelligent birds has been the subject of several studies. These birds plan ahead for times when food isn’t readily available. This ability was previously thought to be unique to humans. Scrub Jays bury excess seeds and nuts beneath leaves, grass or mulch; and will retrieve them when food sources in their environment are scarce.

They may also hoard and bury brightly colored objects found in their environment.

According to research, their brain-to-body mass ratio rivals that of chimpanzees and cetaceans (ie. whales and dolphins).

Blue Jay Funerals: The University of California, Davis reported an odd behavior of Western Scrub Jays that is not typically associated with animals. These birds appear to mourn the loss of flock members. These jays will loudly screech near a dead jay for as long as 30 minutes and remain close to the body for a day or two. Similar behavior was reported from the extinct Carolina Conures – who flocked around injured or dead flock members (often wounded or killed by hunters) in a manner that suggested mourning. This predictable behavior made these birds easy targets and contributed to the extinction of that species.

Cooperative relationship with large mammals: Mule deer have been observed allowing scrub jays to hop over their bodies and heads as they search and feed on parasites, such as ticks. The deer appeared to facilitate the process by standing still and holding up their ears to provide easy access to the jays. 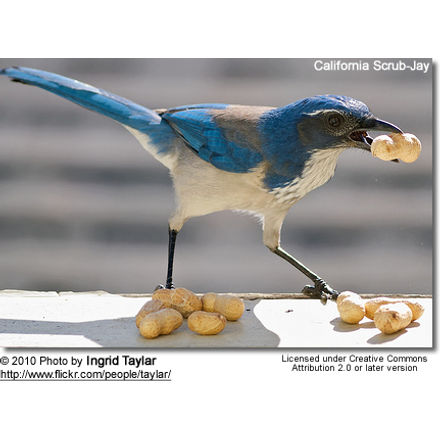 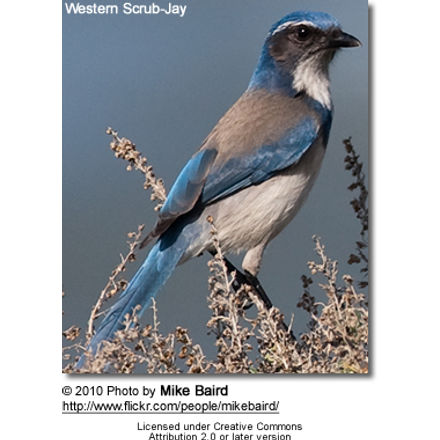 Western Scrub Jays are resident (non-migratory) within their range, which extends from southwestern Washington to southwestern Wyoming, Colorado, and central Texas south through the southwestern United States to southern Baja California and Oaxaca, Puebla, and west-central Veracruz in Mexico.

Vagrants may occur as far north as southwestern British Columbia in Canada.

They inhabit scrubby woodland and chaparral, favoring pinyon, juniper and oak trees. But they may also occur in mesquite bosques or suburban gardens. 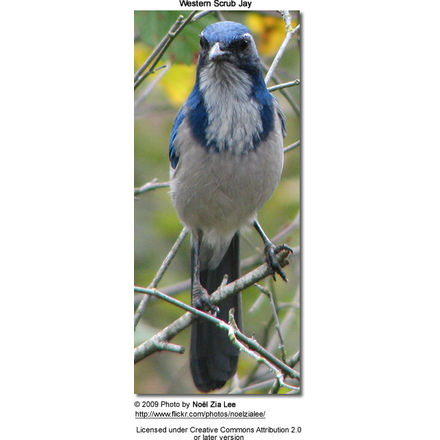 Three distinct groups have been identified: 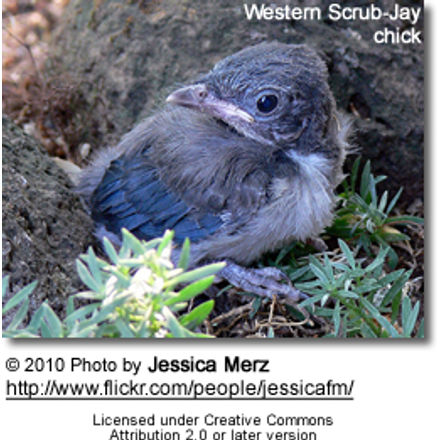 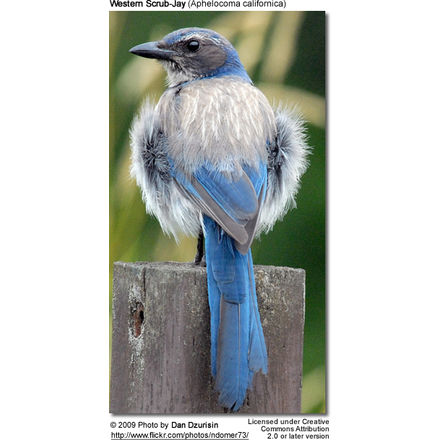 The Western Scrub Jays and the Pinyon Jays are the only larger blue birds found in western USA that don’t have a head crest. 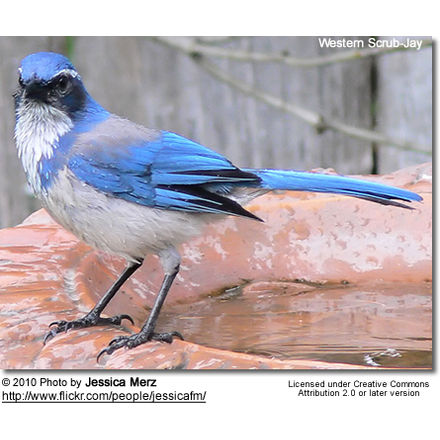 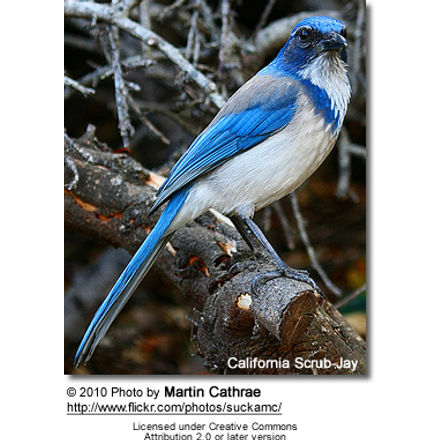 The diet of the Western Scrub Jays varies by season.

During the spring and summer, a large part of their diet consists of:

In winter, they switch to:

At any time of the year, they may visit bird feeders for sunflower seeds, peanuts and corn. They can become quite trusting in urban settings and are known to be easily trained to eat treats (such as peanuts) off human hands. They will also feed on fruits and vegetables grown in gardens and fields.

Outside the breeding season, these jays forage in pairs, family groups or very small flocks. They tend to be aggressive towards other birds, and have been known to steal hoarded acorns and other food items from other birds.

These smart birds cache excess food at scattered locations within their territories for retrieval at a later stage (typically at a time when food sources are scarce – such as during the winter). Their accurate and complex memories enable them to recover hidden food resources even after long periods of time. 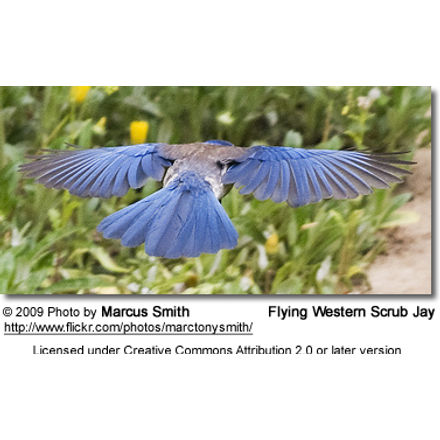 Western Scrub-Jays are typically monogamous, but will seek new mates if their previous was lost.

Most nesting occurs between March and July.

The females construct the nest with assistance by the males. The sturdy, basket-shaped nests are made of twigs, dry grasses and moss; and the interior is lined with rootlets, fine fibers, feather down and mammal hair. The outside dimensions of Scrub-jay nests are about 13 – 23 inches (33- 58 cm). It takes about 10 days to complete a nest.

Nests are built low in trees or bushes as low as 3 feet (0.9 meters) up to 33 feet (10 meters) above the ground. However, most of them are between the range of 6 – 14 feet (1.8 – 4.3 meters) in oak, pinyon-pine or other trees or shrub. Nests are generally well concealed in foliage, vines and mistletoe.

The female incubates the eggs for 15 – 17 days. The hatchlings are blind and naked. Both parents feed and protect them. The young fledge (leave the nest) when they are about 17 – 19 days old and they remain with their parents for about five months. 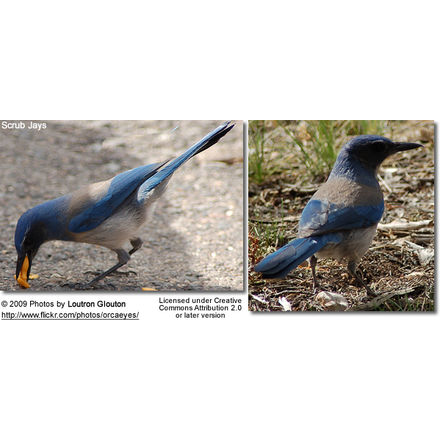 Their varied vocalizations are can be harsh, nasal cheerps and chattering calls. They are rendered as “jay“, “jree“, “check-check-check.”

The average lifespan of a Western Scrub Jay is about 9 years, but some wild birds have lived 15 years or longer. The oldest reported Western Scrub Jay was a captive bird called “Aaron” who was found in Castaic, CA in 1991 and was raised in captivity. Aaron lived 19 years and 8 months.