The Whimbrel (Numenius phaeopus) is a wader in the large family Scolopacidae. It is the one of the most widespread of the curlews, breeding across much of subarctic North America, Europe and Asia as far south as Scotland.

This is a migratory species wintering on coasts in Africa, South America, south Asia into Australasia and southern North America. It is also a coastal bird during migration. It is fairly gregarious outside the breeding season.

This is a large wader at 37-45 cm length. It is mainly greyish brown, with a white back and rump (subspecies N. p. phaeopus and N. p. alboaxillaris only), and a long curved bill (longest in the adult female) with a kink rather than a smooth curve. It is generally wary. The usual call is a rippling whistle, prolonged into a trill for the song.

The only similar common species over most of this bird’s range are larger curlews. The Whimbrel is smaller, has a shorter, decurved bill and has a central crown stripe and strong supercilia. 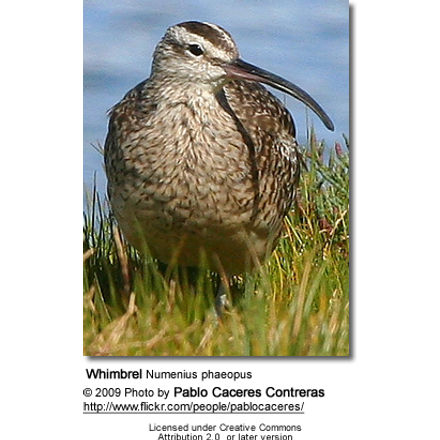 This species feeds by probing soft mud for small invertebrates and by picking small crabs and similar prey off the surface. Prior to migration, berries become an important part of their diet.

The nest is a bare scrape on tundra or Arctic moorland. Three to five eggs are laid. Adults are very defensive of nesting area and will even attack humans who come too close.

Near the end of the 19th century, hunting on their migration routes took a heavy toll on this bird’s numbers; the population has since recovered.

In the British Isles it breeds in Scotland, particularly around Shetland, Orkney, the Outer Hebrides as well as the mainland at Sutherland and Caithness.

The Whimbrel is one of the species to which the Agreement on the Conservation of African-Eurasian Migratory Waterbirds (AEWA) applies. 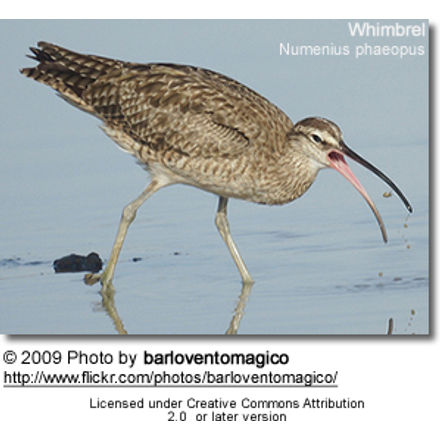