The Whiskered Tern (Chlidonias hybridus) is a seabird of the tern family Sternidae.

This bird has a number of geographical races, differing mainly in size and minor plumage details. The scientific name arises from the fact that this, the largest marsh tern, show similarities in appearance to both the white Sterna terns and to Black Tern. 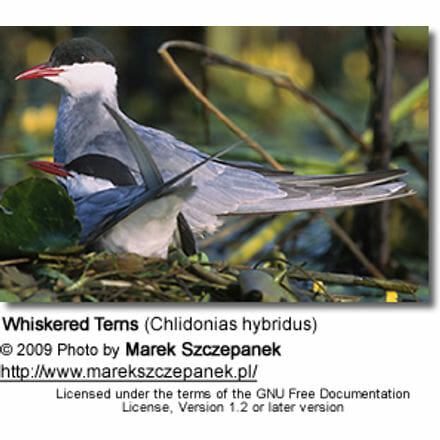 C. h. hybridus breeds in warmer parts of Europe and Asia. The smaller-billed and darker C. h. delalandii is found in east and south Africa, and the paler C. h. javanicus from Java to Australia.

The tropical forms are resident, but European and Asian birds winter south to Africa and southern Asia.

This species breeds in colonies on inland marshes, sometimes amongst Black-headed Gulls, which provide some protection. 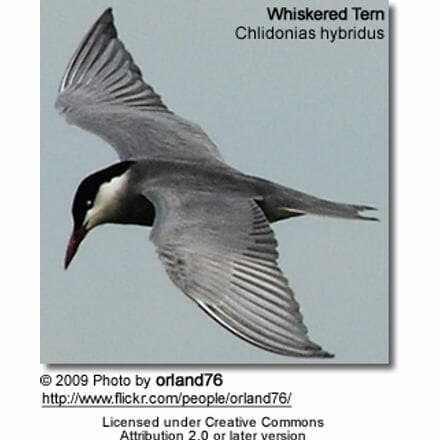 The size, black cap, strong bill (29-34 mm in males, 25-27 mm and stubbier in females, with a pronounced gonys) and more positive flight recall Common or Arctic Tern, but the short, forked-looking tail and dark grey breeding plumage above and below are typically marsh tern characteristics.

The summer adult has white cheeks and red legs and bill. The crown is flecked with white in the juvenile, and the hindcrown is more uniformly blackish, though in the winter adult this too is flecked with white. The black ear-coverts are joined to the black of the hindcrown, and the space above is mottled with white, causing the black to appear as a C-shaped band. The sides of the neck are white; this sometimes continues across the nape. The collar is less sharply defined. All through the year the rump is pale grey.

In the juvenile, the mantle (279 mm) has a variegated pattern. The feathers of the back and scapulars (shoulder feathers) are dark brown, with prominent broad buff edgings and often subterminal buff bars or centers. There is usually an admixture of new gray feathers, especially on the mantle, quite early in the fall. The mantle is silvery-gray in the adult.

In winter, the forehead becomes white and the body plumage a much paler grey. Juvenile Whiskered Terns have a ginger scaly back, and otherwise look much like winter adults. The first winter plumage is intermediate between juvenile and adult winter, with patchy ginger on the back. 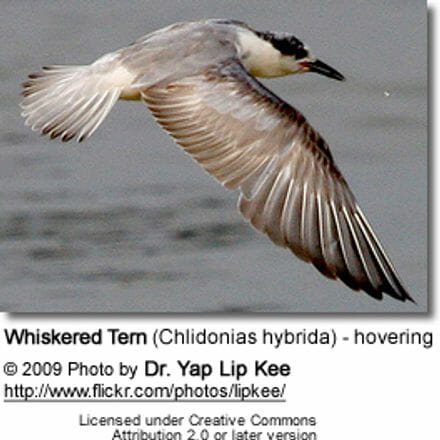 The call is a characteristic krekk.