The White-chinned Petrel or Cape Hen, Procellaria aequinoctialis, is a large shearwater in the family Procellariidae It ranges around the Southern Oceans as far north as South Australia, Peru and Namibia, and breeds colonially on scattered islands.

The White-chinned Petrel averages 55 cm (22 in) in length. This large petrel is sooty-black and has some white on its throat and chin. Its primaries (wing feathers) can have a silvery appearance underneath.

Its bill may be horn or yellow with a black tip, and also black between the nostrils. It has black feet. When it flies, it mixes slow wing beats with glides. Although normally quiet, it will rattle or groan while at its colony.

During non-breeding season, these petrels fly from the Antarctic pack ice to the Subtopics 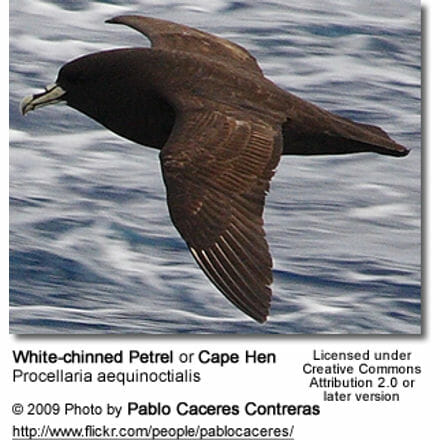 Their diet is composed mainly of krill followed by fish. White-chinned Petrels feed by surface seizing and by undertaking shallow dives, and they will readily follow ships to collect fisheries discards, making them vulnerable to long line fisheries.

Both sexes help to build a nest, and will help incubate the egg. Upon hatching, both sexes again will assist in feeding and protecting the young..

A 2004 estimate placed the adult bird population at 7,000,000 with an occurrence range of 44,800,000 km2 (17,300,000 sq mi). This birds high infant mortality rate and high loss of life due to longline fisheries has caused the IUCN to classify it as Least Concern. An overall decline in population is inferred by a drop in burrow occupancy rates of 28% at Bird Island, and an 86% reduction in population at Prydz Bay.

Also, monitoring on Marion Island has shown of 14.5% reduction, and a 37% reduction on the Crozet Islands.

Unintentional death at the hands of long line fisheries has proven to be a major contributor to the overall population decline. Nearly all of the bycatch from the Namibian hake are White-chinned Petrels.

10% of the South African pelagic (over sea) longline bycatch and 55% of the demersal Also, the White-chinned Petrel has suffered at the hands of invasive species such as the Brown Rat, Rattus novegicus, and the Black Rat, Rattus rattus.

At this point in time, several of the islands are protected areas. Ongoing studies and population monitoring are occurring at South Georgia, Prince Edward Islands, the Kerguelen Islands, and the Crozet Islands. Finally, they are a part of ACAP Annex I, and CMS Appendix II.

To assist in reversing the decline in population it has been proposed to continue and extend monitoring studies, trying to eliminate most invasive species, promote adoption of best practice mitigation measures at all fisheries within the range via ACAP, FAO, CCAMLR.