They breed across northern Canada and the western United States.

Northern birds migrate to the southern United States. In some parts of the west, they are permanent residents.

White-crowned Sparrow is a very rare vagrant to western Europe. 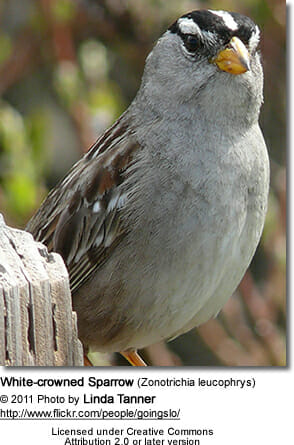 Adults measure 18 cm in length, including the long tail.

The plumage above is brown-streaked and the plumage below is grey. They have black and white stripes on their head and a grey face. There are white bars on the brown wings. Their bill is pink or yellow. These birds forage on the ground or in low vegetation, but sometimes make short flights to catch flying insects.

They mainly eat seeds, other plant parts and insects. In winter, they often forage in flocks.

They will also readily visit bird feeders – typically early and late in the day. They like millet, but will also eat sunflower chips and cracked corn. They will usually avoid conflicts with other birds.

White-crowned Sparrows nest either low in bushes or on the ground. The nest is typically situated under shrubs.

The average clutch consists of 3 – 5 brown-marked grey or greenish-blue eggs.

The call of the White-crowned Sparrow has many variations.

The subspecies pugetensis‘s song is reminiscent to “You can’t come and come and catch me!”