The White-lined Tanager (Tachyphonus rufus) is a medium-sized Tanager.

Its range stretches from Costa Rica south to northern Argentina, and on Trinidad and Tobago, where they inhabit semi-open areas, including gardens.

White-lined Tanagers appear to be territorial, as only one nesting pair is usually seen in an area.

White-lined Tanagers average 18.5 cm in length (including their long tails) and weigh around 33 g. Their stout pointed bill is mostly black.

The adult male is glossy black, apart from white underwing coverts and a small white patch on the upperwing. These white patches are mostly conspicuous in flight.

The plumage of females and immatures is rufous, somewhat paler below. 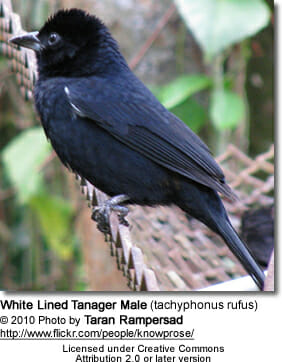 They build bulky cup nests in trees or shrub. The female lays 2 to 3 brown-blotched cream eggs, which she incubates for 14–15 days.

They eat a wide variety of fruit, but especially epiphytes, but also take some nectar and insects, including beetles, ants and grasshoppers.

Its call is a fast repetitive cheeru.

On the islands of Trinidad and Tobago, the White-lined Tanager is often called ‘Parson’ (for the male), and ‘Singing Angel’ – in appreciation of its whistling ability.