The White-tailed Eagle (Haliaeetus albicilla), also known as the Sea Eagle, Erne (sometimes Ern), or White-tailed Sea-eagle, is a large bird of prey in the family Accipitridae which includes other raptors such as hawks, kites, and harriers.

It is considered a close cousin of the Bald Eagle and occupies the same ecological niche in Eurasia. 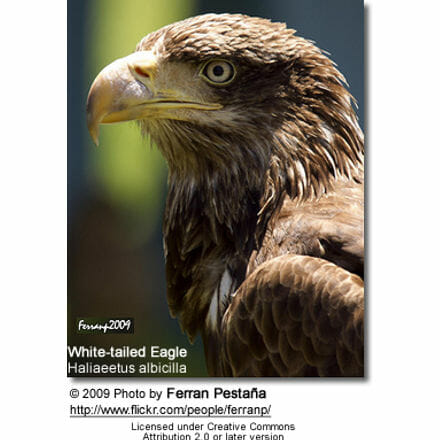 This large eagle breeds in northern Europe and northern Asia. The largest population in Europe is found along the coast of Norway. The World population in 2008 stands at only 9,000 – 11,000 pairs.

They are mostly resident, only the northernmost birds such as the eastern Scandinavian and Siberian population migrating south in winter.

Small disjunct resident populations occur in southwesternmost Greenland and western Iceland. The former has been proposed as a distinct subspecies groenlandicus based on their very large size and body proportions.

However, the species is now considered monotypic and the size variation is clinal according to Bergmann’s Rule.

A recent genetic study of mitochondrial DNA is consistent with this idea. Greenlandic white-tailed eagles are, on evolutionary time scales, a relatively recently founded population that has not yet accumulated a lot of unique genetic characteristics.

However, the population appears to be demographically isolated and deserves special protection. 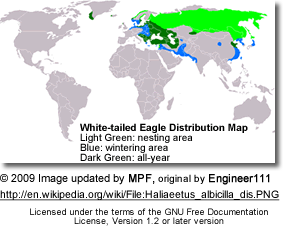 The White-tailed Eagle forms a species pair with the Bald Eagle. These diverged from other sea eagles at the beginning of the early Miocene (c. 10 mya) at the latest, possibly (if the most ancient fossil record is correctly assigned to this genus) as early as the early or middle Oligocene, about 28 mya ago.

As in other sea-eagle species pairs, this one consists of a white-headed (the Bald Eagle) and a tan-headed species. They probably diverged in the North Pacific, spreading westwards into Eurasia and eastwards into North America.

Like the third northern species, Steller’s Sea Eagle, they have yellow talons, beaks, and eyes in adults. 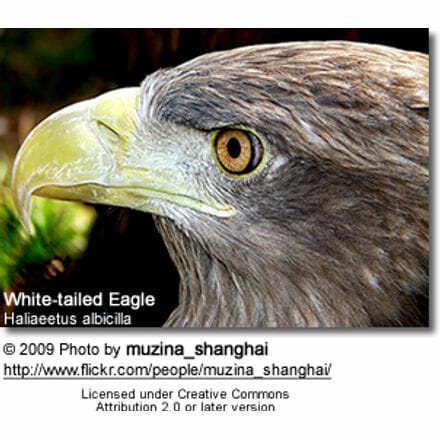 It has broad “barn door” wings, a large head and a thick “meat-cleaver” beak. The adult is mainly brown except for the paler head and neck, blackish flight feathers, distinctive white tail, and yellow bill and legs.

In juvenile birds the tail and bill are darker, with the tail becoming white with a dark terminal band in sub-adults.

Some individuals have been found to live over 25 years, 21 years on average. 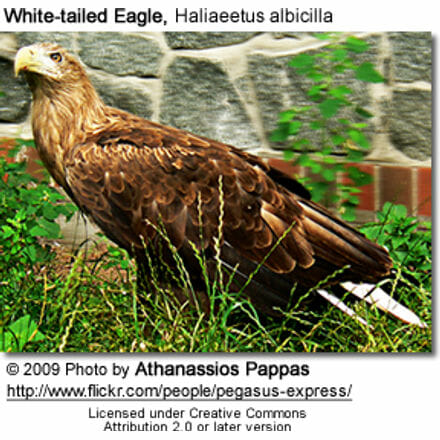 White-tailed Eagles are sexually mature at four or five years of age. They pair for life, though if one dies replacement can occur quickly. A bond is formed when a permanent home range is chosen.

They have a characteristic aerial courtship display which culminates in the pair locking talons mid-air and whirling earthwards in series of spectacular cartwheels.

White-tailed Eagles are much more vocal than Golden Eagles, particularly during the breeding season and especially the male when near the eyrie. Calls can sometimes take on the form of a duet between the pair.

The nest is a huge edifice of sticks in a tree or on a coastal cliff. Being faithful to their territories, once they breed, nests are often reused, sometimes for decades by successive generations of birds; one nest in Iceland has been in use for over 150 years. In Scandinavia, trees have been known to collapse under the weight of enormous, long established nests.

The territory of the White-tailed Eagle ranges between 30 and 70 km², normally in sheltered coastal locations. Sometimes they are found inland by lakes and along rivers.

Mated pairs produce one to three eggs per year. The eggs are laid two to five days apart in March or April and are incubated for 38 days by both parents.

Once hatched, chicks are quite tolerant of one another, although the first hatched is often larger and dominant at feeding times. The female does most of the brooding and direct feeding, with the male taking over now and then.

Young are able to feed themselves from five to six weeks and they fledge at eleven to twelve weeks, remaining in the vicinity of the nest, dependent on their parents for a further six to ten weeks. The sex of nestlings can be identified using field methods, or using DNA.

Surplus chicks are sometimes removed from nests to use in reintroduction programs in areas where the species has died out. If left in the nest, they are often killed by the first-hatched sooner or later, as in most large eagles.

In such programs, the birds are raised in boxes on platforms in the tree canopy and fed in such a way that they cannot see the person supplying their food, until they are old enough to fly and thus find their own food.

The Eagle’s diet is varied, including fish, birds, carrion, and, occasionally, small mammals. Many birds live almost wholly as scavengers, regularly pirating food from otters and other birds, but this eagle can be a powerful hunter as well.

Locally, this species may compete fiercely with Golden Eagles over the rabbits and hares either eagle may catch. The daily food requirement is in the region of 500-600 g.

Although a less active hunter than the Golden Eagle, and usually losing out to them in direct competition for a single food item, they can exist at higher population densities and out-compete Golden Eagles because of their longer gut and more efficient digestive system, being able to live better with less food.

Near-extinction and recovery in Europe

White-tailed Eagles are apex predators. Therefore, they tend to experience bioaccumulation from environmental pollutants that are present in their prey, and also suffered intensive persecution by shepherds and gamekeepers who considered them (usually wrongly) to be a threat to their livestock and gamebirds.

During the period 1800-1970, White-tailed Eagles in most of Europe underwent dramatic declines, and became extinct in many regions of western, central, and southern Europe.

While Norway, Germany, Poland, and Iceland harboured the largest surviving populations, pockets of reproducing pairs remained in several other countries.

Intense conservation actions throughout much of the remaining European distribution range (legal protection to decrease hunting, protection of breeding sites, and winter feeding) led to a recovery of many local populations.

Since the 1980s, the European White-tailed Eagle population has recovered steadily, and is spreading back westward.

It has today recolonised several traditional breeding areas in Europe and the recovery is still on-going, assisted in Ireland and the United Kingdom by reintroduction schemes.

Some threats still remain, notably illegal persecution by gamebird shooting interests and egg thieves in Scotland, and a new threat from wind turbines is emerging with significant mortality (considerably in excess of the area’s population productivity) occurring at the Smøla Windfarm in Norway.

It was successfully reintroduced to the Isle of Rum, in the Small Isles archipelago in Scotland, in 1975 and now breeds throughout the Western Isles and the mainland coast of Wester Ross.

One of its Gaelic names is ‘iolaire sùil na grèine’ or ‘eagle of the sunlit eye. In August 2008 fifteen chicks raised in Norway were released at a secret location in Fife, in expectation of reintroducing the species in the east coast of Scotland as well.

The White-tailed Eagle is still a rare breeder in Britain following its extinction and reintroduction, with 36 pairs in 2006 and 40 in 2008.

On 22 May 2006 it was announced that a pair of White-tailed Eagles was breeding in the Oostvaardersplassen nature reserve in the Netherlands. They arrived on their own, not as a reintroduction.

This is the first time the bird has bred in the Netherlands in modern times. In 2007, 2008 and 2009 the eagles returned to their nest.

The White-tailed Eagle is being reintroduced to Ireland. The program started in the summer of 2007.

Fifteen-twenty young eagles from Norway are being released each spring into the Killarney National Park in the south-west of Ireland.

This comprehensive project will last a number of years with many more eagles being released. The species has a rich history on the island but became extinct in Ireland in the 1800s due to persecution from landowners.

Studies of microsatellite and mitochondrial DNA in White-tailed Eagles from North-central Europe have shown that the recovering European population has retained appreciable amounts of genetic diversity, implying low risk of inbreeding depression (a serious concern in species with low population density).

Therefore, the recovery of this formerly endangered species is a true success story for nature conservation.

The story also shows how local protection of a species can be successful, and important for preserving the species’ evolutionary potential.

The White-tailed Eagle is believed to be the White Eagle shown in the Polish Coat of Arms.

On Orkney, sea eagle bones have been found in 4000 year old burial mounds, suggesting that the birds were revered by the prehistoric people there, a belief strengthened by the Pictish stone carvings of sea eagles from Orkney.

In the Shetland Isles fishermen believed that as soon as a sea eagle appeared fish would rise to the surface, belly up; this led to some fishermen using eagle fat, smeared on their bait, to increase their catch.