The White-tailed Ptarmigan (Lagopus leucurus) is the smallest bird in the grouse family.

It is found in the mountains of western United States and Canada.

The White-tailed Ptarmigan is an alpine species, a permanent resident of the high mountains above the timber line, during most of the year. It occupies open country and flies a great deal more than forest grouse, but still prefers running to flying.

It ranges from Alaska and western Canada south to northern New Mexico.

Adults are 12 to 13 inches long, with males only slightly larger than females. The average weight is 12 to 15 ounces.

The White-tailed Ptarmigan is the smallest of the ptarmigans and is smaller than the Ruffed Grouse.

In winter, this bird is pure white except for a black beak and eyes. In summer, it has a mottled and barred brown head, breast, and back with white wings, belly, and tail.

White-tailed Ptarmigan are so named because they are the only ptarmigan with no black on the tail. The tail is white during all seasons of the year.

In fall, during the U.S. hunting season, both sexes are mostly pale cinnamon-rufous above with fine spotting and vermiculations (= a pattern of fine, wavy, worm-like lines or streaks of color) to brownish black. A few breast feathers are usually white and the belly, tail, and wings are white. 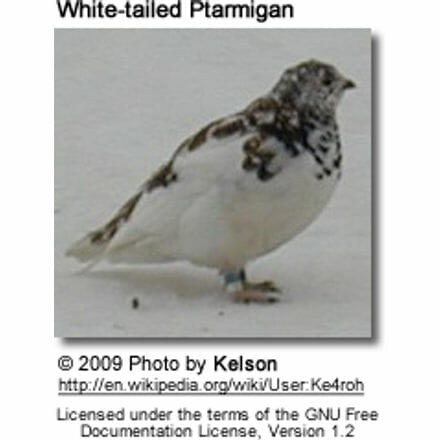 Males return from their timberline wintering areas to establish territories on spruce-willow timberline breeding grounds in April. Females arrive in early May and pairs are formed.

Four to eight buff, faintly spotted eggs are laid in a hollow on the ground lined with a small amount of grass, leaves, and feathers. Males remain with the females until the eggs are hatched after an incubation period of 23 days.

This species’ winter food is primarily willow buds. Alpine areas lacking willow cannot support ptarmigan for long. In spring, the leaves and flowers of several forbs are eaten, but willow remains an important part of the diet. In summer, broods may also feed on insects and bulbils of knotweed.